I do a fly-over of the Valley to reveal more unusual structures…. 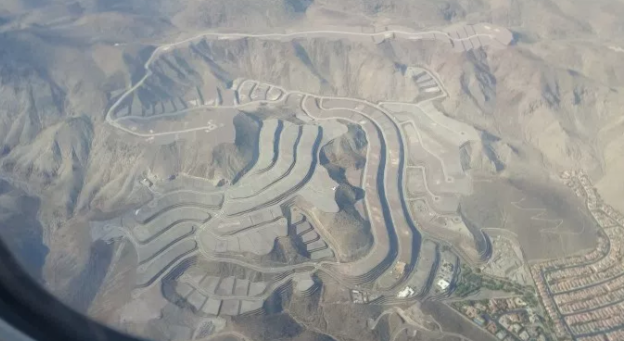 I’ve had a great time bringing you our series of “Hidden Vegas” oddities…things that are sometimes right under your nose. Like the abandoned Rocket Ship Ride at Circus Circus. A cleverly-hidden unfinished St. Regis Tower at Venetian. The massive phallic erection inside Shops at Crystals. Today’s entries aren’t on the Strip, but if you’ve flown into the city a few times, you’ve no doubt seen one or more.

First up is Ascaya, a failed luxury housing project. This massive abandoned development in the Henderson area is etched into the side of the McCullough mountain range. It’s easy to spot from the sky, southeast of the Strip and not far (when viewing from a plane seat, that is) from the M Resort.

The Ascaya project was intended to provide 331 lots for high-end mansions. It was shut down and barricaded in 2009, after more than $200 million was spent on blasting into the mountainside to construct housing pads and connecting roadways.

I recall shooting some pics up there in the foothills near that development back in 2009. I biked up there a number of times from the Anthem housing area where my parents used to live. Got a rude shock one day when an accidental blasting charge went off in open air as they were working in another zone near that area.

I was actually facing in that direction and could see the distortion of the shock wave hit me about a half-mile away. The shock wave shattered windows in nearby completed homes. I have been to eleven hotel implosions and this shock wave exceeded anything I ever felt at those…..

I dug up one pic from 2009 showing my bike out there in the foothills behind that area…..you can see the Strip in the distance… Used to go up there all the time…..

“You can also see where some of the work was going on cutting into the hills.” Greg C.

“You can see the Ascaya terraces here from behind. The city is beyond the ridge”.

According to VegasInc, the site was re-opened in August of 2014 to sell off parcels of land in phases. The article also described plans for a clubhouse to lure prospective builders, with an intended summer 2015 start date. I can see no evidence of it in my aerial photos taken in July 2016 .

The official Ascaya website had you believing that everything in the project is going according to plans of its creator, Hong Kong billionaire Henry Cheng. Panoramic motion photography sweeps over the gigantic  layout and invites you to envision the gorgeous community that awaits. Good luck with that…even the site itself appears to be dead these days, although a dedicated Facebook page is (somewhat) alive.

Only time will tell if the Ascaya Luxury Community ever lives up to the promises of its designers. Until then, much like the Fontainebleau behemoth on the north Strip, Ascaya will be a shrine…and a testament….to over-reaching ambition.

Once your eyes have finished taking in the Ascaya debacle, allow them to drift in a southeasterly direction. There you should be able to spot another massive project, albeit a very successful one.

The Nevada Solar One plant lies in the Eldorado Valley, south of the region between Las Vegas and Boulder City. If you’ve ever taken a day trip to Laughlin, you’re sure to have seen this massive solar power plant. After all, it covers 400 acres of prime sun-fed Nevada desert.

Nevada Solar One took sixteen months to construct and went online in June of 2007. Unlike the Ascaya project, which literally blew away fifteen million cubic yards of mountain rock, the Solar One plant’s 760 parabolic trough concentrators follow the natural terrain of the desert floor.

The silent and somewhat aesthetic complex generates about 136 million kilowatt-hours annually. And according to Wikipedia, the amount of carbon emissions it reduces by creating clean energy is the equivalent of removing 20,000 automobiles from the road each year.

A different kind of power plant…hydro-electric…is just a short drive from Nevada Solar One. Of course, I’m talking about Hoover Dam. This man-made wonder continues to generate enormous amounts of electricity for Arizona, California, and Nevada. That’s despite the fact that continually-dropping water levels have dramatically changed the appearance of Lake Mead.

Man-made Lake Mead has shrunken in both depth and width, with shorelines crawling far inward throughout the past several years. The entire Lake Mead Marina had to be relocated in 2008 as water disappeared. It was floated two miles downstream to join Las Vegas Marina. This was a huge effort that moved hundreds of boats, slips, a restaurant, and store at the pace of 1 mph.

Lake Mead Marina was only one of several dock and marina relocations required due to the drop in depth. Flying overhead, you can clearly see what remains of this dwindling body of water…and where the shoreline once was. It’s a sad, extreme example of the impact of climate change.

Just a little farther north of Lake Mead, you may spot another debacle to rival Ascaya. But at least this one actually was completed before falling apart. Lake Las Vegas Resort is a never-was destination of hotels, residences, golf courses, shops, restaurants and a casino.

The centerpiece of this resort community is a 320-acre artificial lake that was built atop the Las Vegas Wash. The wash feeds contaminated…and radioactive…run-off from the Vegas valley into Lake Mead (keep that in mind if you’re ever planning a boating or swimming excursion there). Filling of the new lake began in 1990, and over 3,500 acres of land surrounding it were made available for retail and housing development.

Since then, Lake Las Vegas Resort has had a depressing history of closures, lawsuits, and massive debt. Hotels have been closed, re-opened by other owners and then closed again. Empty storefronts spread out across the retail “Village” area and abandoned golf courses eventually turned from green to brown (they have recently sprung back). The Monte Lago Casino ceased operations twice before being relaunched as a barely-used events center.

As with Ascaya, the official Lake Las Vegas website is full of gorgeous photos depicting a successful and glamorous destination. But one look from above will tell you that it’s anything but.