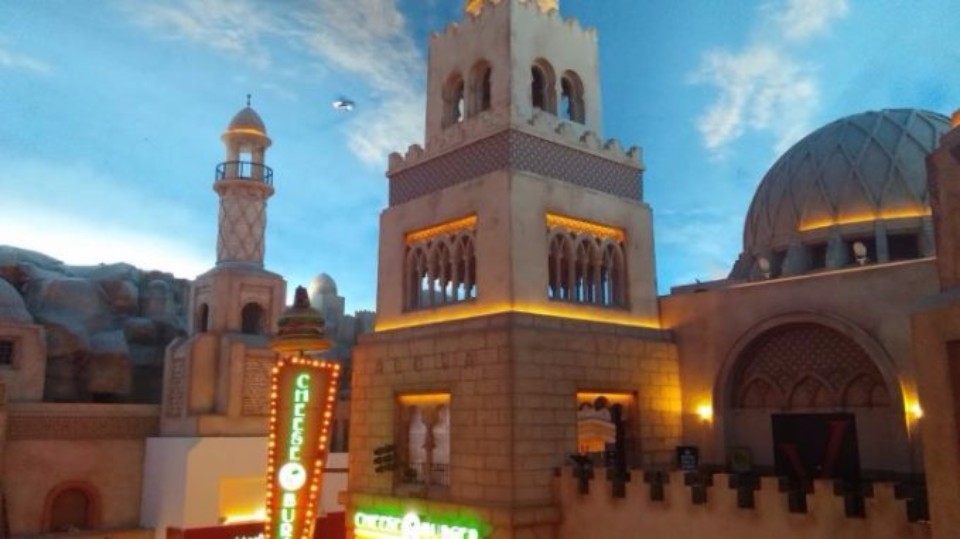 Looking skyward for curiosities that make up “Hidden Vegas”…

Finding remnants from the bygone days of Vegas is always a treat. I’ve been scouring the mezzanines, peering under tarps and poking my camera through keyholes to find curiosities that sail under the radar for most people.

Last night while meeting friends for drinks and a show, I looked to the skies…from the inside of Miracle Mile Shops of Planet Hollywood. There I found remains of the formerly Arabian-themed Desert Passage Shops.

I started coming to Las Vegas in 2005, and had only been through the Aladdin Resort once or twice. At that time, the Planet Hollywood restaurant chain was in deep trouble with closures taking place around the country.

The announcement that Aladdin would be re-branded as Planet Hollywood Hotel Casino seemed very foolhardy. Sure, the movement to de-theme Strip resorts was in full swing and Middle-eastern-flavored places like Aladdin and Sahara had fallen out of fashion in a post-9/11 world. But Planet Hollywood??? That decision seemed as out-of-touch as renaming it after dying restaurant chains like Chi-Chi’s or Kenny Roger’s Roasters.

Shows how much I knew, as Planet Hollywood Hotel is now a hip, popular middle-tier destination, with stars like Jennifer Lopez and Pitbull frequently on the marquee. Of course their biggest draw is Britney Spears, so there’s still plenty of dried-up cheese on the Planet Hollywood menu.

The existing hotel is the second Aladdin to be built on this part of the Strip. The original opened in 1966 and was imploded in 1998. A new Aladdin was rebuilt from the ground up and opened its doors in 2000. Seven years later it officially became Planet Hollywood Resort.

The Arabian motif was gradually stripped from both the hotel and adjoining Desert Passage Shops, which received a new frontage and glossy modern exterior. Inside, the corridors got a top-to-bottom makeover. Most of the ceiling was painted into a matte-gray finish, discouraging shoppers from gazing upward at the former faux skies.

However, not everything was taken away. There are two distinct areas within the mall where the original decor survives. One surrounds the V Theater complex and fountain show.

The other is nestled under the indoor rainstorm.

Perhaps it’s telling that the domes, citadels and faux village structures that comprise the Desert Passage remnants exist where other attractions demand your attention…and offer a convenient distraction. You’ll find be hard-pressed to find any mention of them on the glitzy, contemporary Miracle Mile website.

The Arabian architecture of Desert Passage is clearly…and hilariously…out-of-sync with the rest of the Mile.

Until very recently, the south-facing exterior of the mall along Harmon Avenue still carried the Aladdin facade. The removal of Krave nightclub and opening of Buffalo Wild Wings and another Nacho Daddy finally jump-started the finishing of that section.

It’s uncertain if the remaining Arabic interior will eventually get stripped out and de-themed. But for the time being, it’s another chapter in our book of Vegas curiosities.

This article previously appeared in a different form on another website.