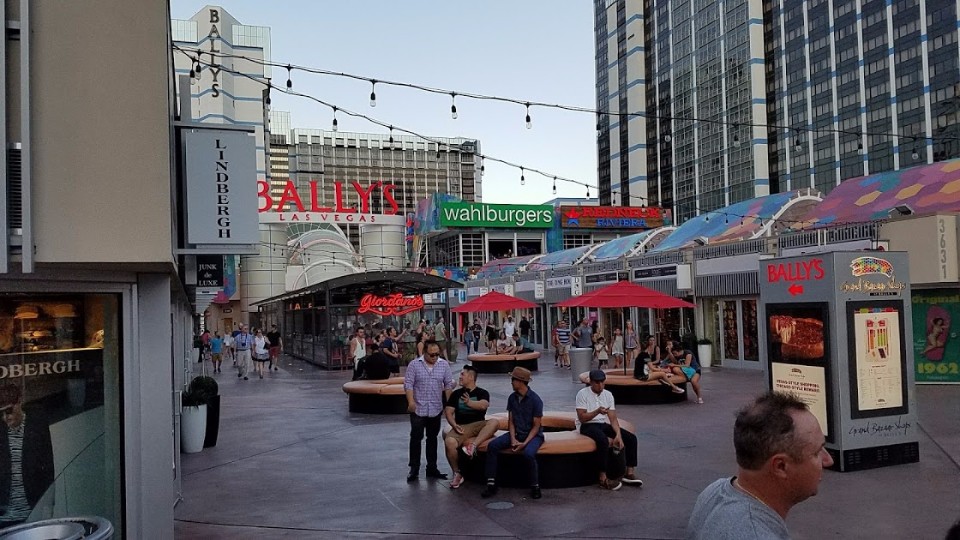 Vegas is utilizing every available space to sell you something – with mixed results. 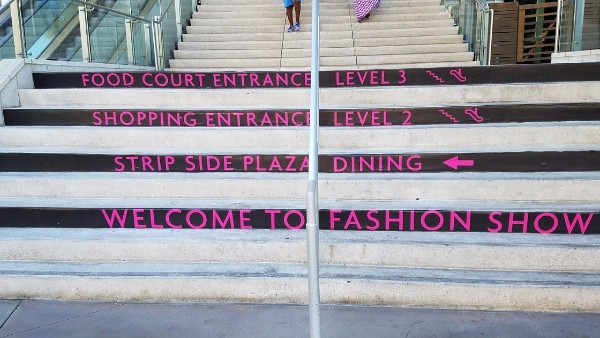 Taking in the north half of the Strip from the 26th floor of Wynn’s original tower, I was reminded of a trend that has swept over Vegas in recent years. An amazing amount of new stores, bars and restaurants have risen where once was nothing but sidewalk. 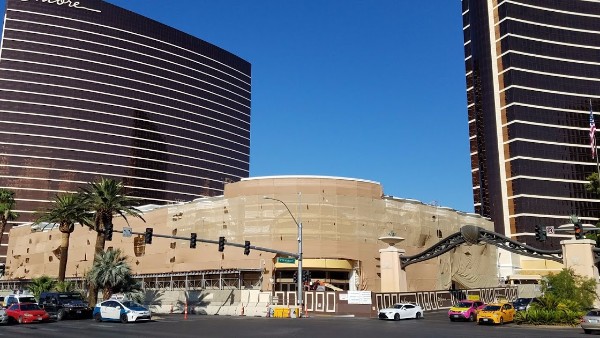 A Sugar Factory restaurant in front of Fashion Show Mall. The CVS/Avengers annex that replaced a pirate ship’s dock. Gilley’s and Starbucks over the wooden “boardwalk” of Treasure Island. One of the newest is Wynn Plaza, the fourth retail corridor at Wynn/Encore resort. All have sprung from what is now considered “wasted space”. 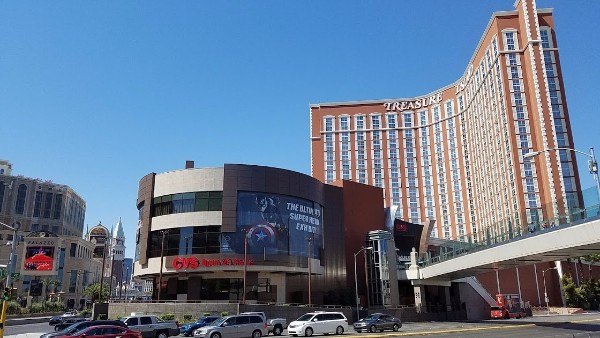 Rhumbar at Mirage was one of the first to initiate this approach. Using square footage from decorative faux grass and shrubbery, the lounge/patio opened in March of 2009. Tellingly, it arrived around the same time that the casino’s White Tiger Pool was removed in favor of BLT, a gourmet burger joint.

This entire section of Mirage was once accessed by a “people mover” or electric walkway. As was the philosophy of the new “megaresort” concept, people-movers and free attractions would lure pedestrians inside from the Strip, where they’d hopefully stay to gamble and more.

But with this decade’s falling interest in slot machines and table games, the wise men of Mirage opted to replace that expensive tiger pool with something that could potentially generate alternate income. At the same time, the people-mover was replaced with a conventional concrete sidewalk, a cost-cutting measure that reflected the new business model. 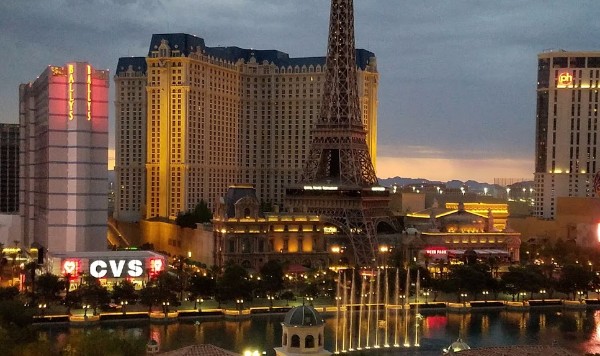 Soon after, Paris Hotel Casino ripped out the gorgeous La Fontaine des Mers fountain and constructed Sugar Factory restaurant and store in its place (it later became HEXX Kitchen + Bar). Then HEXX was topped with a second level for Budweiser Beer Park. That made two bar/restaurant concepts on a spot that was once just eye candy. 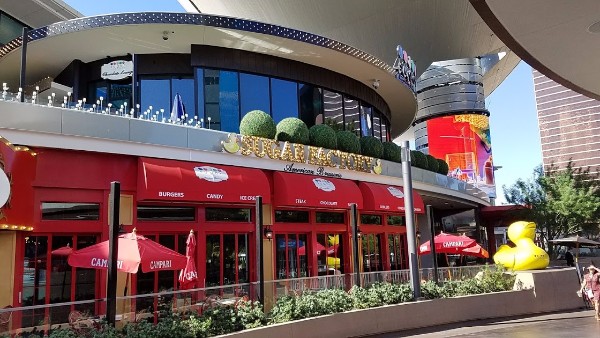 Interestingly, now that Sugar Factory has relocated to Fashion Show Mall, it holds the dubious distinction of rising up not once but twice from Vegas Strip sidewalks. 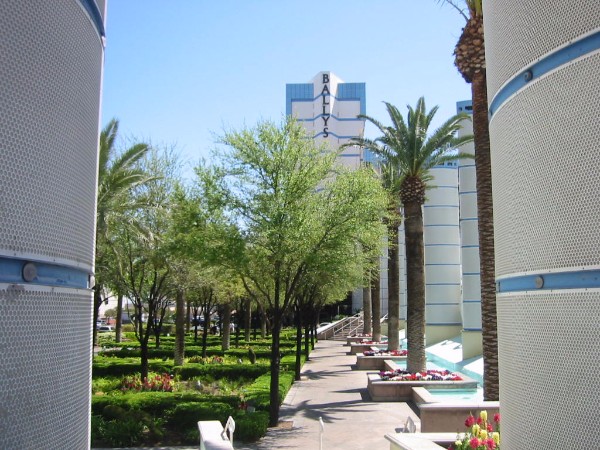 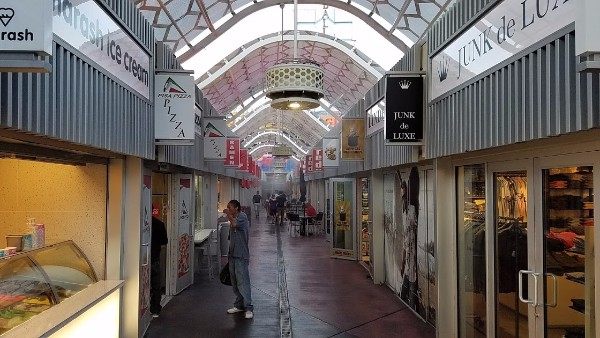 As shifting trends have turned Las Vegas into an oversized Mall of The Americas, visiting the casinos is no longer a must-do activity. Why bother to go inside when you can eat, drink and shop right on the sidewalk? 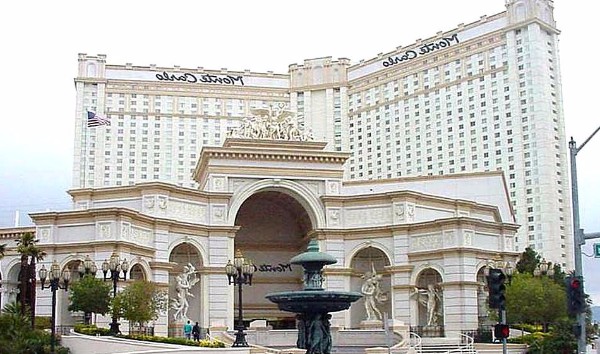 Monte Carlo, the rather generic-looking MGM Resorts property that was once fading into indifference, was rebranded into the even more generic-sounding PARK MGM. The first step in that process was…you guessed it…the retail-ization of the hotel’s frontage. Out went sculptures and a large fountain, in came Double Barrel Roadhouse, 800 Degrees Pizza, Boulevard Creamery and more. Decorative flourishes were gutted and replaced by pale colors and some cheap-looking olive green paint. Boring! 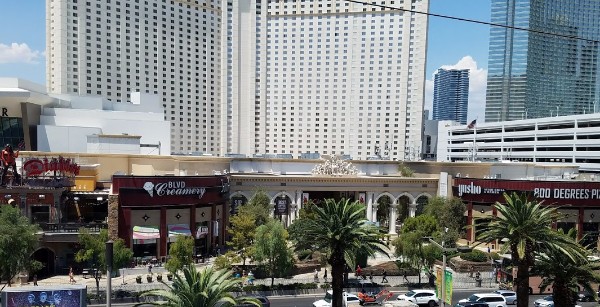 This time, the build-out was so extreme that the hotel is essentially hidden from view. Would you even recognize it now from the photo above? It would seem that, as with casinos, the hotels themselves are now becoming a side offering. 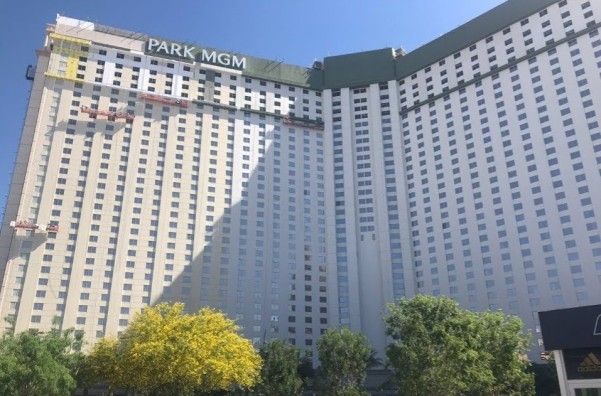 The retail-ization of Las Vegas Boulevard eventually spread to Downtown’s Fremont Street. Underneath the four-block canopy, a wide-open pedestrian mall is now packed to the max with kiosks, vendors, bars and patio lounges (that require a drink minimum to take a seat).

Binion’s is the best example of how Downtown casinos shifted their focus from interior to the sidewalks. Exploring the property, you’ll find numerous examples of a time when guests stayed and played indoors. 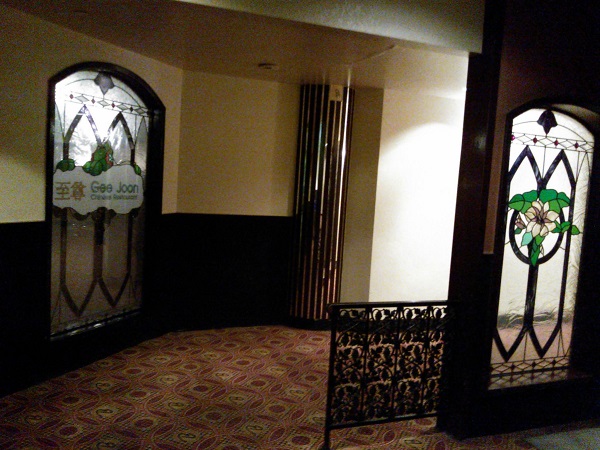 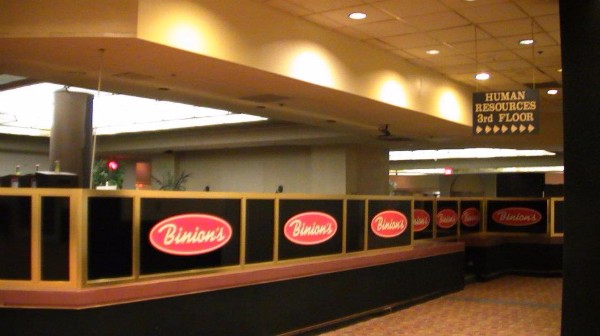 On the second floor, a buffet and the Gee Joon Asian restaurant are collecting dust. In the basement, a once-popular 24-hour Coffee Shop is abandoned as well. 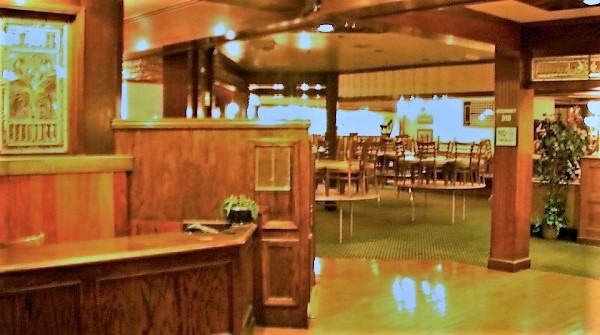 The back half of the casino floor, where guests once checked into the hotel (shuttered since 2009), is nearly forgotten. The poker room, original home of the World Series of Poker, has also been put to rest. 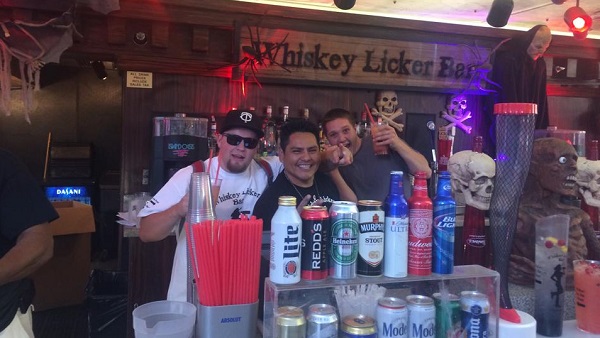 But out front, thriving Whiskey Licker Bar and Cowgirl Up  Cantina would have you believing that all is well inside the historic property. Outdoor revelers raise their glasses and park their bums on saddle-shaped stools, most never venturing into the aging property. New visitors might never realize that a 366-room hotel once operated there.

Of course, outdoor offerings are no guarantee of success. When Lady Lucky reopened as Downtown Grand in 2013, a great deal of fanfare centered around activities planned for adjacent Third Street. Sidewalk gambling, movie screenings and indoor/outdoor dining and an open-air nightclub (courtesy of Richard Sandoval’s “Commissary”) were rolled out. Not one of those things took hold.

Then the folks at Downtown Grand took yet another cue from the Strip and announced an outdoor urban park called The Quad. Utilizing empty lots and part of a parking garage, The Quad was to feature a stage, tavern, fitness center, nightclub and climbing wall. If all of this sounds familiar, perhaps you’re thinking of LINQ Promenade or The Park at New York NY. Surprisingly, it all fell through in favor of an additional hotel tower, currently under construction. 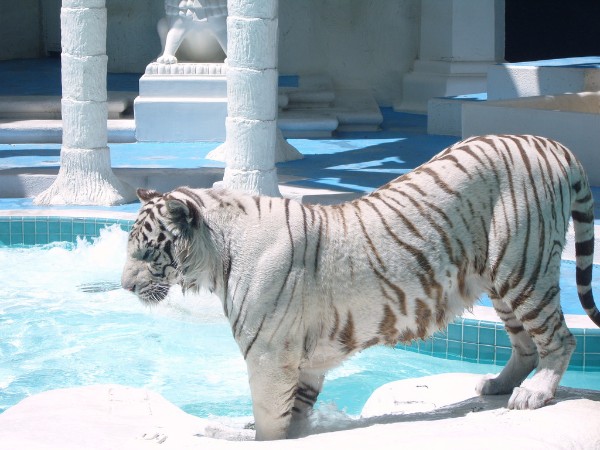 And so it goes…the constant reinvention of Las Vegas. Eventually, visitors while tire of the heat and venture back into the casinos that put Sin City on the map. Until then, the white tigers will be waiting.

2 thoughts on “If You Build It On The Sidewalk, They Will Come. Maybe…”