The inaugural “Vegas Unfiltered Wrap-up” is upon us. Brace yourselves…

It was the best of times. It was the worst of times. Within the laughter, tears and tragedy were moments of amazement and joy. Whatever you sought, there was something for you to relish and moments to make you cringe. Nothing will let you forget 2017 – the Year in Las Vegas.

Mariah and Britney are a couple of very defiant fish. You throw them into the lake and they stubbornly hop back into your boat. And like a couple of dying carp, they stink up their respective venues with dead eyes and mouths that sporadically gulp for air.

In Carey’s case, she can’t even be bothered to walk or dance. Instead, she gets carried around like a sack of lumpy potatoes. Or perhaps a corpse, as this infamous moment from July suggests: 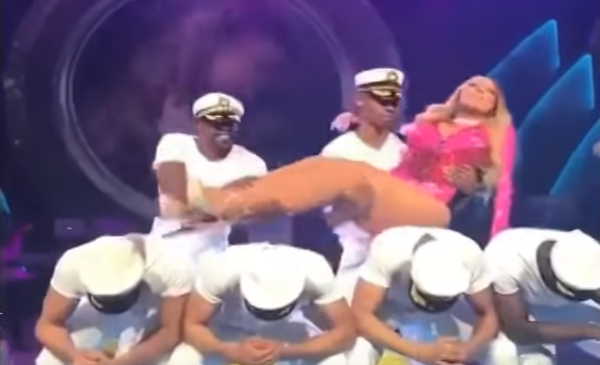 Mimi’s outrageous ego must have taken a nasty blow when Caesars failed to extend her 2-year residency. That final evening at the Coliseum was so under-attended (despite deep discounting) that the so-called diva refused to perform “until the place filled up”.

How do I know? Because I was there, talking to staffers who were laughing about it as it happened. Still, she came back for five sappy Christmas shows during the slowest week of the year. Tickets started at only $59.00. Ouch!

Britney Spears will flap her arms and sleepwalk her way through a final performance of Piece of Me at Planet Hollywood this New Year’s Eve. Thank goodness her hunky and talented singer/dancer Willie Gomez will be onstage to inject a much-needed spark.

There’s talk that Britney will resurface at another property, much like legionnaire’s disease keeps attacking guests at Rio Las Vegas. Her resilient career is proof that wooden objects really do float.

2 thoughts on “2017 In Review Part 2 – The “Bye, Felicia” Award for Most Interminable Residency”