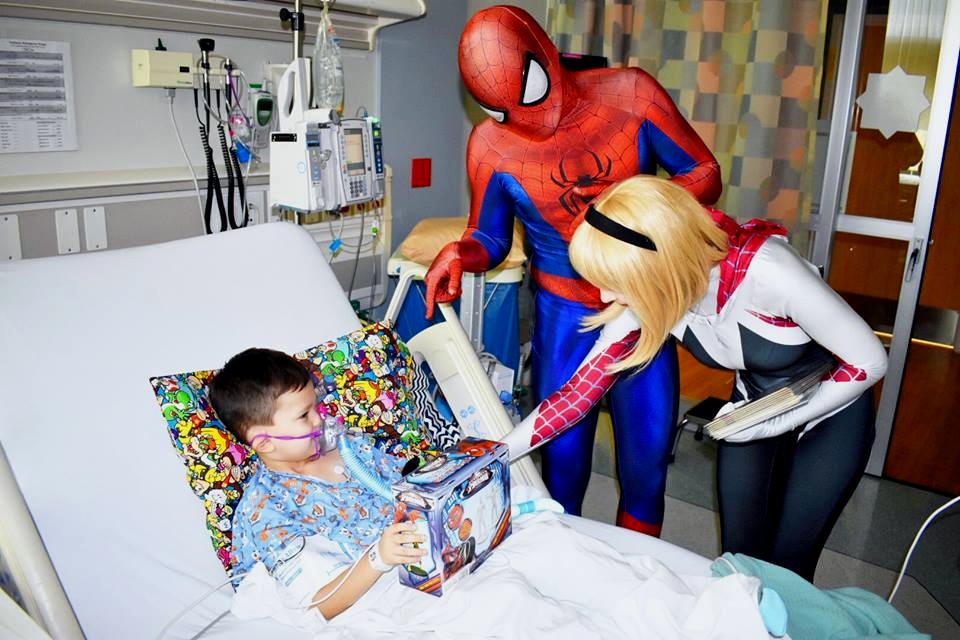 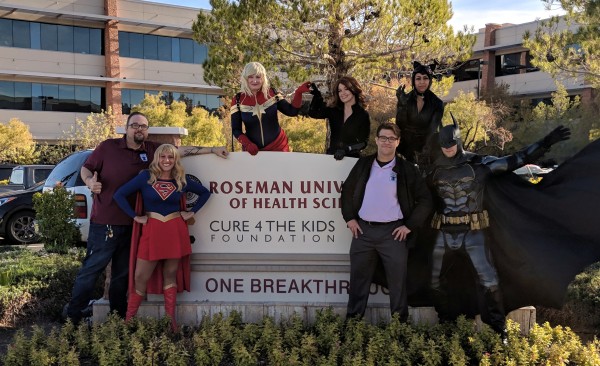 When I was seven years old, this writer was stricken with a condition that baffled doctors. After spending an entire summer indoors, I was transferred to a major hospital in Pittsburgh. There I was placed in isolation for a series of tests and eventually, surgery.

Being so far from home and away from my pets, friends and family was terrifying. I remember looking out my hospital window at that huge city as the sun went down, crying and wondering why my mom had left me here all alone. All I had to comfort me was a battery-operated radio and a stuffed animal that was incinerated as a precautionary measure.

That was a long time ago, but I still carry the scars of the experience…both on my body and inside my heart. Recollections of that trauma remain, and when I hear about efforts to ease the fears of sick and suffering children, it strikes a deep chord.

While attending the film premiere of Immortal Wars: Resurgence recently at AMC Town Square, I learned about Critical Care Comics. The gentleman manning their lobby display was Richard Tango, a handsome and absurdly charismatic young man who told me about their mission.

Critical Care Comics is a local non-profit. We dress like superheroes and deliver comic books to sick kids all over Las Vegas. We visit every major children’s care facility in the city and also provide smiles to children at Cure 4 the Kids Foundation, a chemotherapy treatment center, and Care Meridian, a long-term children’s care facility. 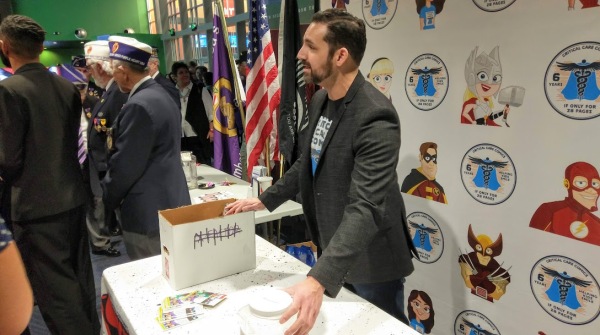 Not only is Mr. Tango an excellent representative for Critical Care Comics, he portrays Marvel hero “Iron Man” during visits to hospitals. Hearing about this charity brought back plenty of emotions….so much so that I had to excuse myself for awhile to regain composure. 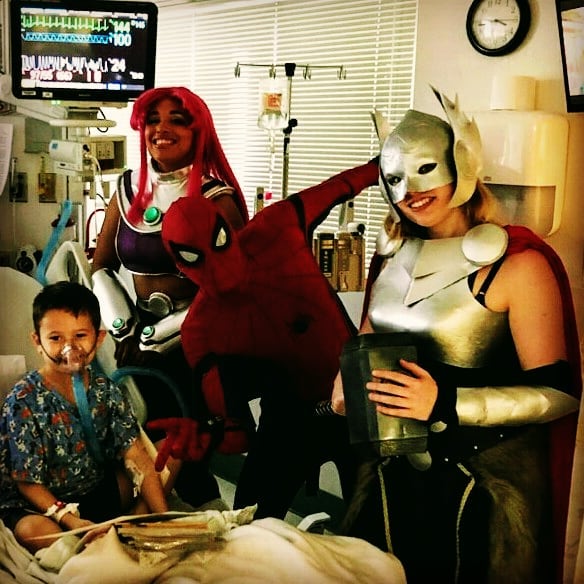 The reason Critical Care Comics was present that evening was to accept donations of comics books and funds…and also to spread awareness about their wonderful mission. Many of the volunteers have stories similar to my own…often much more severe. Mr. Tango told me that both he and founder Jason Golden are survivors of childhood cancer. 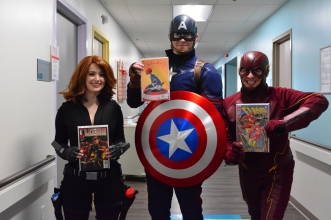 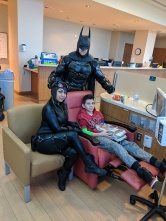 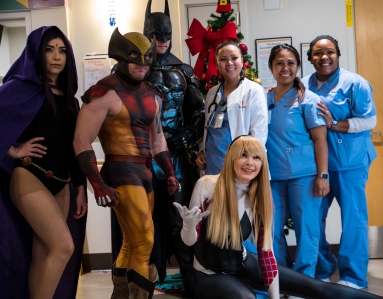 When we walk in, we are approaching kids who are leagues above us. Our strength, our speed, our will is nothing compared to what they’re bringing. These kids are anything but kids. There are times when they are sure they don’t have a favorite super hero. They are sure they don’t read comics. They are SURE that their situation won’t be better just because a group of people in costumes came in to say “Hi”.

And then we walk out of those rooms, and if you were to turn around just for an instant; blink and you’ll miss it. You will see those kids pick up a comic book. You would think it was a caveman inspecting the first wheel. But for them, it’s like discovering FIRE.

For a kid who was so SURE of things. We got them curious about what could be. We got them wondering about whats on the next page. We gave them an escape from what’s practical and probable and got them believing in the IMPOSSIBLE…if only for 28 pages.

Director of Marketing Danny Ballard has been passionate about comics his entire life. He created the Critical Care Comics blog to keep the public up to date on fundraisers and events. This past December he and the volunteers held a Heroes & Villains Ball downtown at The Nerd, a Cocktails-and-Cosplay nightspot at Neonopolis.

Described as a “winter cosplay formal event”, the Heroes and Villains Ball offered a raffle, silent auction and a costume contest with prizes provided by local businesses and supporters. Of course, there was a DJ and dancing, so you could swing with Superman, waltz with Wolverine and tango with Thor.

Last month’s fundraiser was the Valentine’s Day-themed Let’s Be More Than Superfriends. Held at Millenium Fandom Bar in the Arts District, this fundraiser also had a raffle and costume contest, but upped the ante with a special twist:

To raise money for our charity, we auctioned off dates with superheroes like Spider-Man, Spider-Gwen, Mary Jane, Deadpool, Starfire, and Wonder Woman (just to name a few). We hoped it would be fun, but we never imagined that it would help us raise over $2000!

Despite all of that fun and frivolity at gatherings like these, the special people of Critical Care Comics know that their main reason for coming together is to help the children. And since they’re continuing to grow and expand their efforts, there’s always a need for more volunteers. 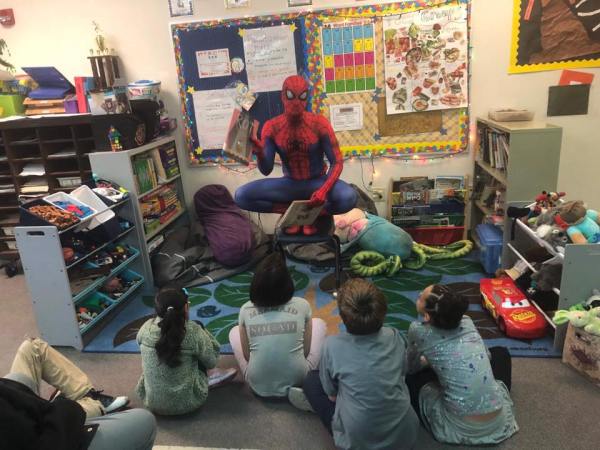 You can help behind the scenes by collecting and sorting comics, assisting in media and publicity…or by portraying one of their inspirational superheroes. There are currently openings for Gamora (Guardians of the Galaxy), Thor, Aquaman, and any other superhero character not already on their roster (Vegas performers, take note!!!). You can offer your assistance by clicking HERE. Of course they always accept child-friendly comics books, too.

People need heroes because heroes save or improve lives and because heroes are inspiring. … Heroes elevate us emotionally; they heal our psychological ills; they build connections between people; they encourage us to transform ourselves for the better; and they call us to become heroes and help others.     Jason Golden

If you’d like to donate to Critical Care Comics or learn more, visit their website by clicking HERE.