First in a series. Bringing you the most dazzling heart breakers from the entertainment and service industries…

Whatever your vision, it’s crystal clear that lovely people flock to Vegas. They come in all makes and models, so no matter your taste, somebody is bound to turn your head.

Many gorgeous specimens settle here to make their fortunes and share their skills. Models, athletes, performers and bartenders are in top demand…as are the gyms, tanning salons and stylists that keep them showroom-new.

While other sites lavish praise on the female form, Vegas Unfiltered has no problem with saluting the hot guys of Vegas. And in honor of this week’s Mr. Olympia Competition and Fitness Expo, I’m launching this series with the timely “Bodybuilder Edition”. Enjoy!

Where you’ve seen him – Men of Sapphire, David Goldrake’s IMAGINARIUM

Multi-hyphenate A.J. Trunk (banner man above) is as busy behind the scenes as he is onstage. The eye-catching host of Men of Sapphire performs as well as being the show’s producer and choreographer. Born in 1980, this New York native takes “chiseled” and amplifies it to the max. Aside from being the front man for his own production, you can see him Tuesday through Sunday in the new David Goldrake’s IMAGINARIUM at Tropicana.

Where you’ve seen him – Chippendales at the Rio Hotel Casino

Tough and tender are perfect descriptions for Carl Matthews. This soft-spoken mountain of muscle is just as eager to lift someone’s spirits as the stacks of iron in his favorite gym. He charms the ladies every night while serving cocktails in the audience for Chippendales. Somehow, Carl still finds time to bust some heads in grindhouse action flicks and feed his obsession with futuristic technology. 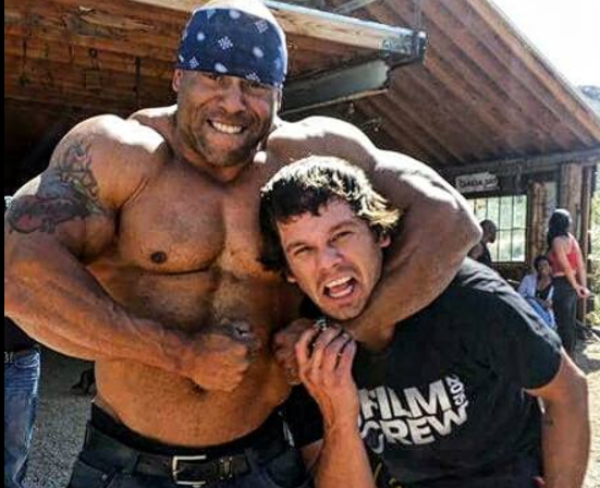 Carl’s positive attitude and refreshingly honest view of the world make him a rare find in Sin City.  If you ask him about his nickname (The Blessing) he’ll tell you this: “It’s not my name, it’s my mission…to be a blessing to someone every day”.

Another gentle giant, mixologist Alex O’Conner is passionate about his craft. Driven to giving the best service possible and pleasing his guests with amazing cocktails, this tall hunk of New England beef is in demand at the hottest bars and nightclubs around Sin City.

Powered by adrenaline from intense workouts, Alex dashes from shift to shift carrying prepared meals and protein bars between short sleep cycles. His hot body attracts attention whenever he works shirtless, but Alex looks just as great in formal attire (for catered functions) or a simple polo shirt (at venues like O’Shea’s).

Be sure to stop by Hard Rock Hotel‘s Center Bar on your way out of Magic Mike Live. Better yet, skip the show and just hang out with Alex. You can also see him at Aria‘s Jewel Nightclub.

It’s hard to tell you very much about this fella, as he changes his name and social media pages more often than some folks change their socks. Currently going by Martinez Carlos on Facebook, he’s also been known on Instagram as Maurizio Trejo.

We first met when he was in the male revue Men of Steele. Since then, Maurizio has been the frontman for a Sexy Firemen modeling group on Fremont Street and is a frequent visitor to fitness competitions. 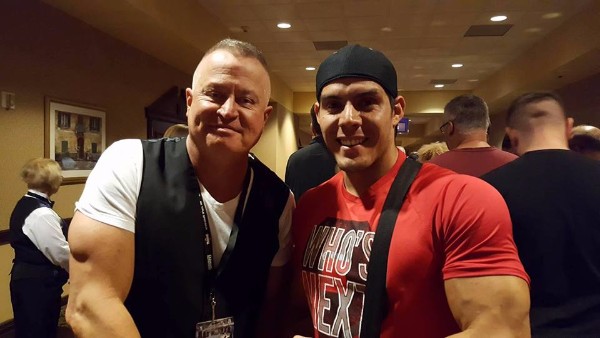 The two of us at last year’s Mr. Olympia press conference…

I hung out with this elusive 20-something bodybuilder for a bit last year at the Mr. Olympia Fitness Expo. Chances are that he’ll be attending once again this weekend. If you’re reading this Carlos/Maurizio….what name shall I call you this year?

One thought on “Hot Guys of Vegas: Bodybuilder Edition”