What do you do when a signature production shuts down, leaving its namesake theater empty? Well, if you’re Bally’s, you forget about the Jubilee! Showroom for awhile and convert the space that was once a gay bar (and a steakhouse before that) into a playground for adults. Then you put in a glitter-clad lady sword-swallower and her gender-nonspecific sidekick and let the balls fly.

Enter if you dare…

That’s the best description I can offer for Miss Behave Gameshow, the upside-down crowd-pleaser currently running at Bally’s. This faux-competition comedy/variety hybrid in The Back Room (adjacent to Indigo Lounge) will have you dancing, singing and playing with bags of trash. Seriously. 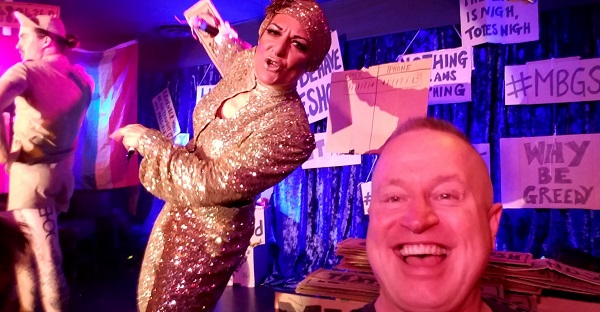 Run onstage and take a selfie…there are no rules…

The brainchild of British comedian Amy Saunders, Miss Behave Gameshow presents Saunder’s alter-ego “Miss Behave” in the title role as host. Assisted by a young guy with a carnival-barker mustache who goes by the name of “Tiffany” (not sure why, but okay), Miss Behave is a rapid-fire assault on the senses. 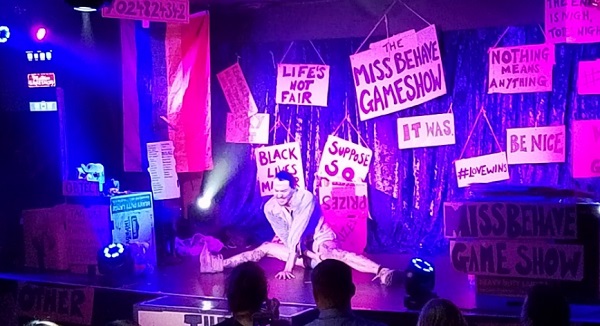 Combining pop culture trivia with today’s obsession with smartphones and a handful of sideshow acts, Miss Behave will have you buzzing about it long after the show is over. Be sure to charge your phone beforehand, as you’ll want to share your WTF video clips with friends when you return to the real world.

It’s rather jarring to see the gorgeous former Liaison Nightclub stripped of its expensive custom oil paintings and adorned with Sharpie-marker cardboard signs. But Miss Behave Gameshow wears its cheapness proudly, like when a “mystery prize” turns out to be sacks of garbage hurled at the audience. 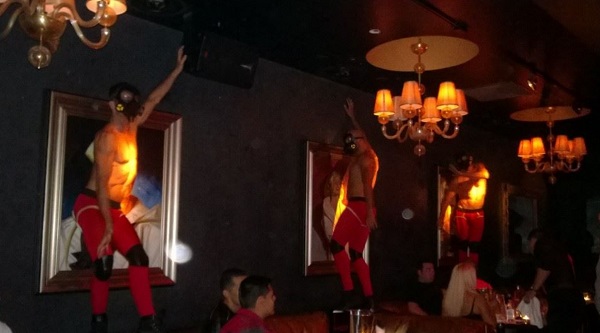 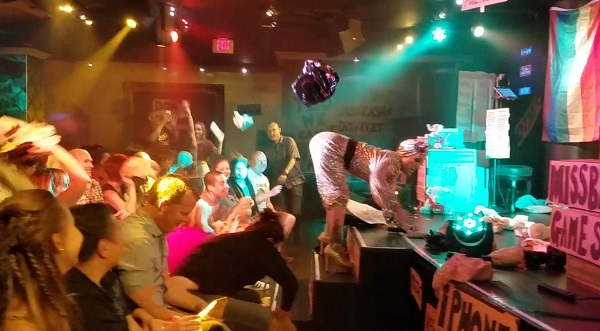 Don’t worry, you’ll be tossing that refuse right back at Miss B. and Tiffany…they wallow in trash…and trashy humor. They also like sing-alongs and impromptu dance numbers. Don’t expect to sit in your seat for very long. The atmosphere here is literally uplifting, invigorating and totally free.

The premise of MBGS is simple. The audience is divided into two teams – iPhone users and “others” aka Android and the game is afoot. Saunders goes through a stack of cardboard signs on which questions and challenges are scribbled. For instance, “Shout Loudest” might have you trying to out-scream the other team…or just shouting the word “LOUDEST”. Can you guess which one scores a point?

The rules are vague and flexible, as are the challenges and prizes. You want a point for your team? Stand up and ask for one. You may get it, maybe not. But that tactic can also backfire and end up losing your team several points instead. Offering bribes and cash will work, though. Really. 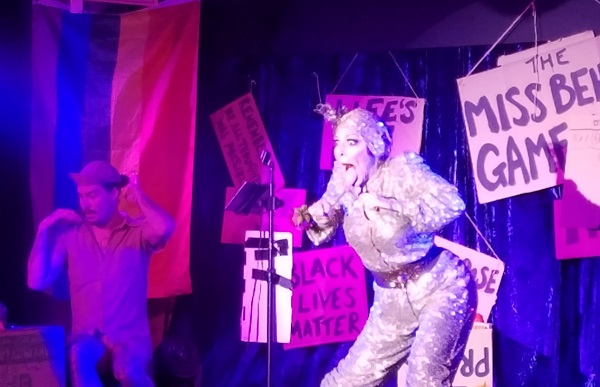 Despite her real-life Guiness Book records for sword-swallowing, Miss Behave keeps pointed objects away from Bally’s audiences. The sharpest things in her collection here are a razor blade wit…and a tongue that’s penetrated by the stem of a flower (don’t look if you’re squeamish).

Rewards are handed out randomly, like the lucky gal who got “A Prize”…those actual words written on a piece of cardboard. The grand prize is a go-for-broke plastic ball fight that makes the Chuck E. Cheese ball pits look like a night at the opera. Kindergarten for grown-ups, indeed!

There are no true victors at Miss Behave Game Show. As Saunders says during the final bows,  “Life is just a game. There are no winners, no losers…just players. So how do you win a game when there are no rules?  You just enjoy the game!”

After some uplifting philosophy, Miss B. and Tiffany join the audience in the anteroom for half-price cocktails, photos and conversation. You’ll find yourself wanting to stick around and relish the madness and positivity that exude from this wild, magnetic duo.

As Vegas continues to smother its productions with sameness and bland repetition, Miss Behave Game Show stands out as something uniquely “Sin City”. It’s an experience that you can’t have anywhere else…and that’s what Las Vegas is all about.

Miss Behave Game Show performs Wednesday through Sunday at 8pm inside The Back Room of Bally’s. Tickets start at $49.99 plus tax/fees and can be ordered here. VegasFool has a discount offer for $29 plus tax/fees by clicking here. Audience members must be 21 or over.