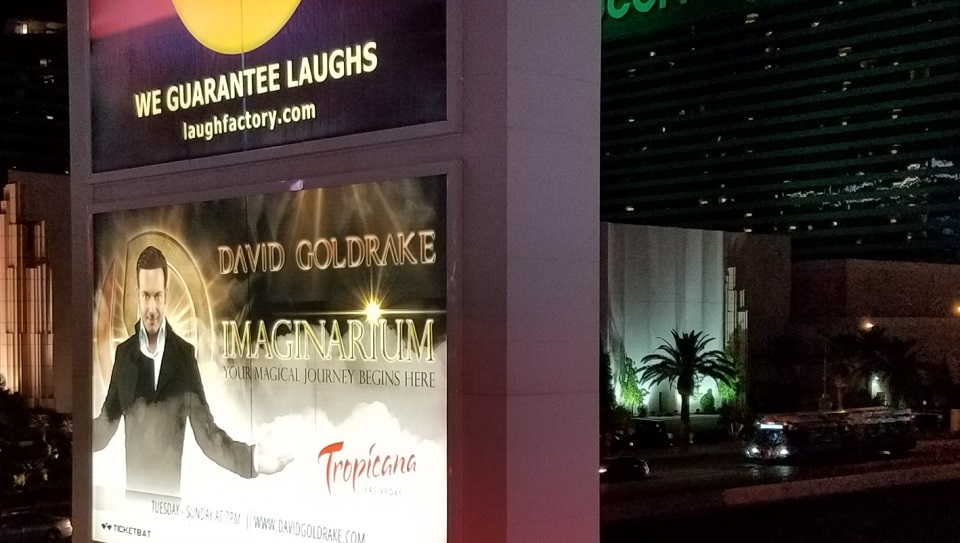 Something mysterious is going on at the intersection of Tropicana Avenue and Las Vegas Boulevard. The entertainment gods have seen fit to grace that location with three epic magic shows. One performer is legendary, the second is flashy, and the newest is a challenger of major proportions. His name is David Goldrake, and his new show David Goldrake: IMAGINARIUM at Tropicana is an entertainment gold mine. 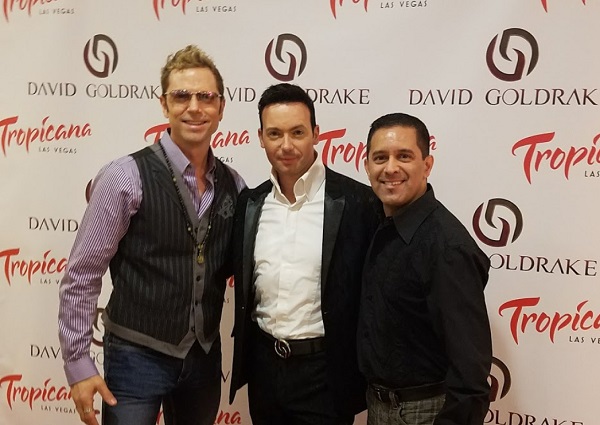 Following on the heels of Jan Rouven‘s shocking abrupt closure and the short-lived Band of Magicians, one might question the wisdom of opening yet another illusion-based production inside the troubled, beautiful Tropicana Showroom. But the third time is clearly a charm, as David Goldrake’s gorgeous presentation is worthy of the space. It’s also deserving of the opportunity to take on David Copperfield and the far-inferior Criss Angel. 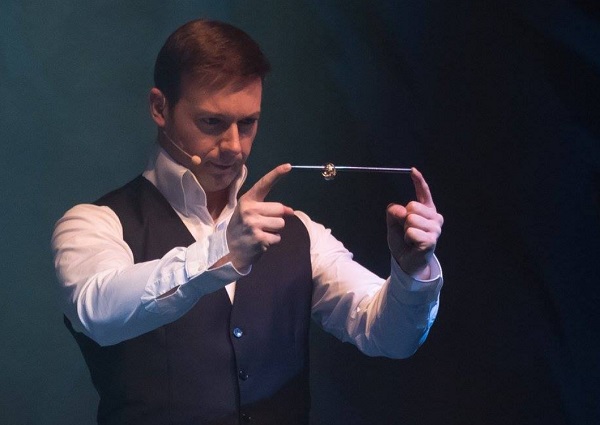 Say what you will about the relevance of magic shows in 2017 Las Vegas, but IMAGINARIUM is much more than hokey top hats and sexy assistants. With an ethereal introduction of smokey morphing shapes and lush music, IMAGINARIUM sets up a surrealistic mood that the Luxemborg-born Goldrake maintains throughout.

After an opening illusion, Goldrake comes out to introduce himself and explain IMAGINARIUM, the circus sideshow that he visited as a child for a fifty-cent admission price. The experience of growing up as a fascinated young man in Europe permeates the production, enhanced by the host’s unique accent and magnetic presence.

David Goldrake, while known in several countries as an “International Man of Mystery”, has yet to make a mark on U.S. pop culture. When you’re a somewhat unknown quantity in Las Vegas, it helps to have charisma and good looks…both of which Goldrake has in abundance. 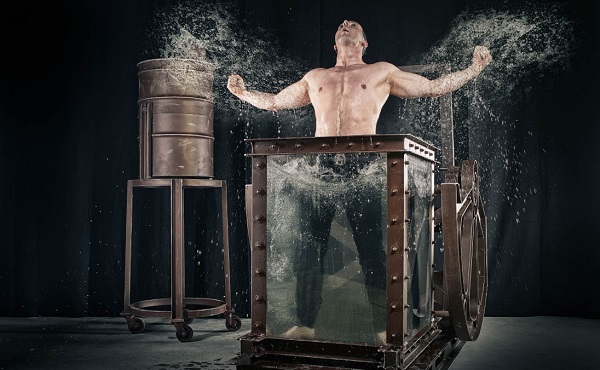 David moves with the grace and elegance of a dancer, yet his massive muscular frame fills the grand Tropicana stage. So do the lush sets and immersive backdrops that pull you into each illusion. Expensive-looking video content from Drop The Spoon (Le Reve/Franco Dragone), steampunk-style design by EDT and costumes from Erin “Topaz” Lareau rival anything that the Cirque-financed Criss Angel has presented at Luxor. 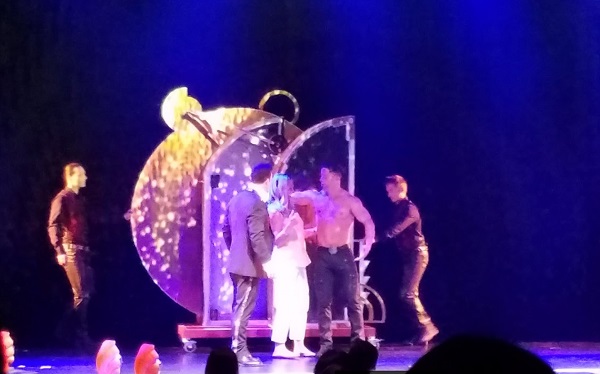 All of those bells and whistles don’t mean anything if the star performer can’t capture your imagination. IMAGINARIUM does so in spades. Large-scale stunts like a human-sized hourglass disappearance and passing through a sheet of solid metal will have you scratching your head. 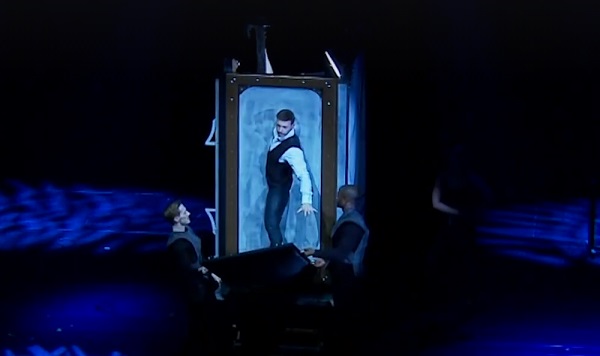 A particularly memorable moment comes when Goldrake collects rings from the hands of three volunteers. Placing them on a spindle while in constant view of the audience, he agitates the rings until they’re suddenly linked together into a small chain. And before you can say “audience plants”, one participant of that illusion was my companion for the evening…there was no collusion. 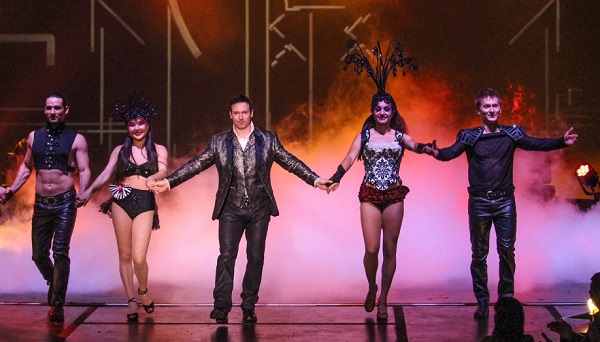 David’s assistants, two women and two men, are skilled performers in their own right. The gorgeous dancers, contortionists, acrobats and aerialists get their own well-deserved sequence, an old-tyme European-styled sideshow sequence highlighting individual talents that come together for a rousing mini-finale. 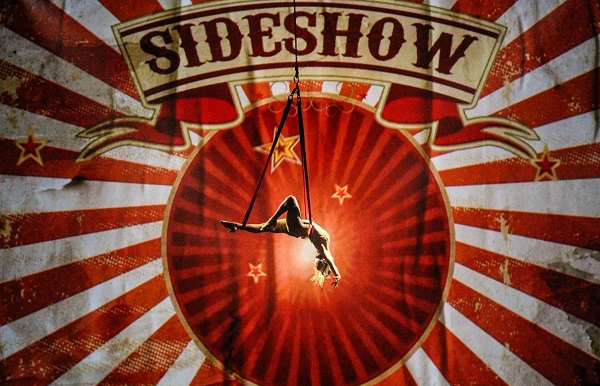 My favorite set piece, by far, is a salute to Houdini’s underwater straitjacket escape. A shirtless (and ab-tastic) Goldrake is chained and suspended upside-down in a glass chamber filled filled with water before your eyes. Never once is the clear tank out of sight…the gasping, bubbles and struggles are real. So were the accelerated beats of my heart. 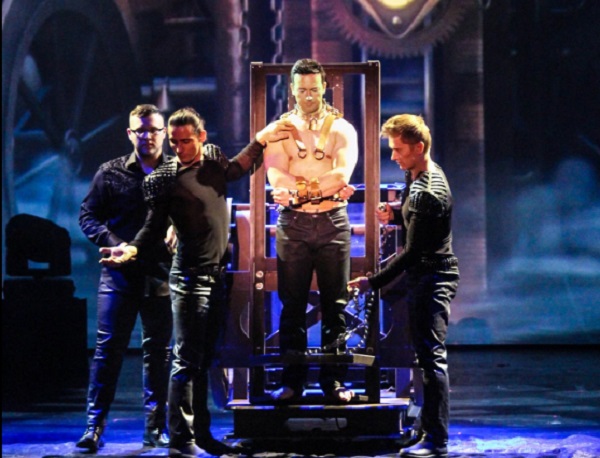 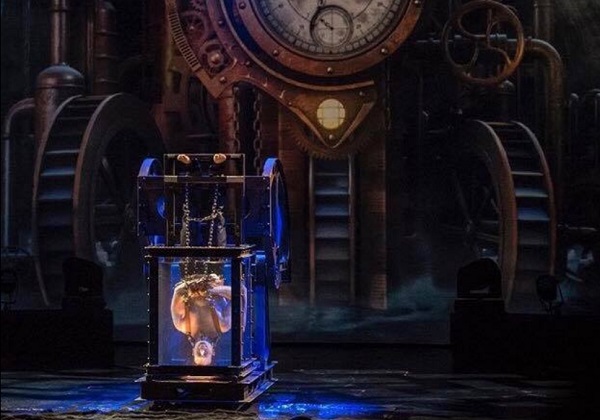 It’s always exciting when a new name bursts on the Vegas scene and raises the bar for a everyone…audiences and performers alike. We saw it happen when Spiegelworld (Absinthe and Cosmo’s Vegas Nocture) challenged Cirque du Soleil, Matt Goss shook up the lounge scene and BAZ: A Musical Mashup redefined musical theater. We’re seeing it once more with David Goldrake: IMAGINARIUM.

There’s a hot new illusionist in town and he’s not to be missed. If you see only one large-scale magic show on your trip to Sin City, make it David Goldrake: IMAGINARIUM. You will be thrilled, mystified…and your heart will soar skyward.

David Goldrake: IMAGINARIUM performs Tuesday through Sunday at 7pm. Suitable for all ages. Tickets start at $39.90 plus taxes/fees and can be ordered here. Groupon is currently offering discount seats starting at $28 with no additional fees by clicking here.