Greg C. brings us another photo essay, this time on sadly-departed classic neon…

When you hear the words “Classic Vegas” or “Old Vegas,” your mind probably tends to gravitate towards Rat Pack shows or tales of the Mafia. For my photographer friend Greg C., the classics are spelled out in miles of glowing neon. Glorious, painstakingly-created works of art…

There’s nothing like memories from past visits…arriving in the city under a blanket of darkness, turning onto the Strip and seeing the dazzling light show that stretched out for miles ahead of you.

Driving past the dual ivory and gold towers of Tropicana, gawking at the multi-colored rings of Bally’s futuristic entry, basking in the flickering of Bill’s Gambling Hall…eventually reaching the ultimate Vegas throwback…Sahara Hotel Casino.

For me, the colors of the Sahara will always hold a special place in the hall of memories. It was the second place that I stayed in the city. I vividly remember getting out of the taxi and listening to the buzzing of the neon tubes and on-off clicking of the bulbs around the porte -cochere.

It was chilly that night, but the signage and blinking lights gave off their own warmth, inviting me inside for an adventure not to be forgotten. 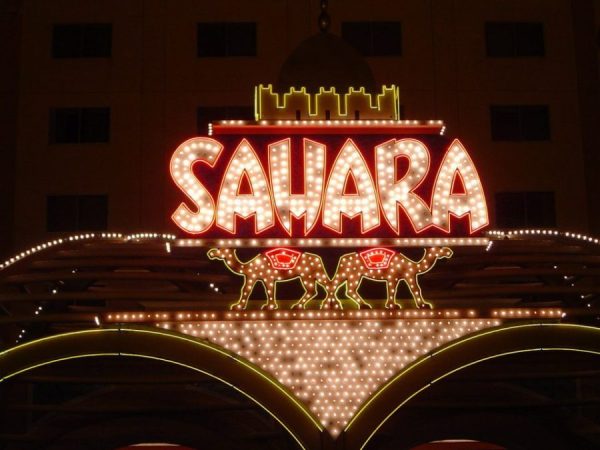 After my scathing analysis of current Vegas trends was published, Greg suggested taking a more visual approach to what we’ve recently lost around the Strip:

I am assembling photos of all the neon signage and cool structures that have vanished in Vegas since 2010. When the photos are seen all together, it creates a vivid idea of how much has been lost in only the last six years.

Greg is absolutely fascinated with Sin City architecture. His photo essays of Westgate Sky Villas, hidden structural oddities and recent implosions speak for themselves. Now he’s ready to turn his lens towards the demise of long-loved neon signage and very familiar landmarks.

The beautiful neon and bulbs from the Barbary Coast were kept by Bill’s Gamblin’ Hall….. but scrapped when they transformed the simple old-school place into the bland Cromwell….

O’Shea’s gave its life so that Project Linq could live. The new version is a pale ghost of the original…a raucous, cheap, easy-access place for casual fun lovers to get plastered and grab some basic eats. Naturally, it had to be wiped out as it runs counter to the modern corporate ideal of high-end, high-budget fun. The old façade was awesome — lots of neon and flashing bulbs. Yep….get it outta here! No place for that in Vegas.

Imperial Palace: Yeah…it had really gone downhill. Still, it was a cheap place to hang if you wanted to be on the central Strip and were on a budget. 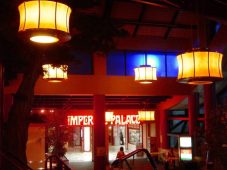 The entrance of Bally’s being destroyed to create the wonderful ghost town of retail shops — the “Not-so-Grand Bazaar”. And the cool purple-glowing section of Casino Royale, destroyed for the modern blah Walgreens and White Castle additions. Gotta have retail now, don’t we?

And out on Flamingo and Paradise, the familiar neon outline of Mr. T (of Terrible’s) was replaced by Silver 7’s. Adios to $9.99 Baby Back Ribs….

Tropicana is still there (well, most of it) but the old-school signage with neon and flashing bulbs is gone…as is the Folies Bergere, which was the resort’s trademark entertainment for most of its pre-renovation life. 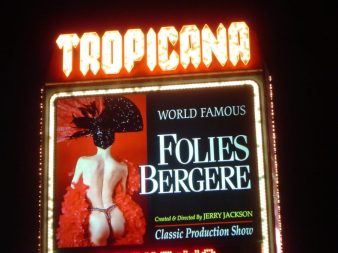 One of the older wings of the property was demolished in 2010 (the 300-wing)……half of it by a little-known implosion. Today’s look is much more bland without the alternating dark/white stripes and the gold-accent glass on the tower tops that was whited out during the refit. The tower along the Strip also had a cool electric-blue waterfall going down the end (which they turned dark — bad decision). We need all the neon we can get…..

Convention Center Drive:  Greek Isles was not a big name for sure…..it was actually a dump–in bad repair. The hotel has the dubious distinction of being the most renamed joint in Vegas….Debbie Reynolds before Greek Isles…. and the Paddlewheel before that……..and the Royal Americana before that……and finally the Royal Inn (its original name when opened in 1970)…. it was bought by Clarion in 2010 and imploded wearing that name.

The elderly Somerset House Motel across the street dated to the early 60’s. It was leveled in 2011. Nothing but empty lots where both stood (seems to be a recurring trend in that area).

It’s hard to get excited by the new trends of “office-building chic”, multi-toned beige and monochromatic blah. Even some room renovations have stripped out colors in favor of hospital-room white (see Delano‘s clinical decor at Mandalay Bay, which feels like being in a padded cell). When Sahara became SLS, the cans of white paint must have numbered in the thousands. 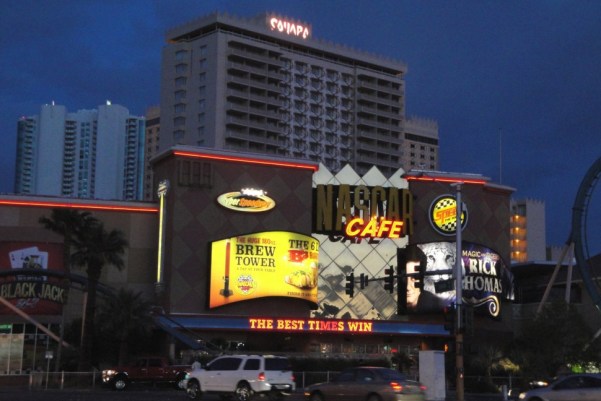 The north end of the Strip has clearly been hit the hardest. Not only have historic properties like New Frontier and the legendary Stardust been turned into rubble, but ballyhooed projects meant to rise from the debris have fallen into their own decay. Let’s hope the same thing doesn’t happen where Riviera once stood.

Can’t begin to say enough on this one–it’s already been talked about enough…. but it has to be mentioned as it was probably the greatest loss of neon glory in recent years…..

These days, visitors are greeted by huge LED screens that rival those in Times Square. Sure, they’re eye-catching, but also cold and clinical.

Fremont Street is the best remaining place to see authentic neon artworks in all their splendor. But they, too, are falling out of favor as hotels get purchased and modernized (think The D and Golden Gate).

If you love neon like Greg and I do, be sure to visit your favorites and snap some photos while you still can. The pile of carcasses at Neon Museum will most likely grow higher as Sin City continues to rip out its own electric heart.

Photos and quotes by Greg C

This article previously appeared on another site. It has been updated.