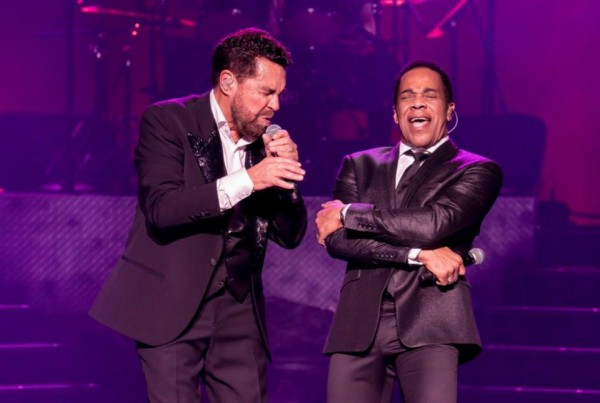 Yet Turner and Holmes continue to prosper and thrive on Vegas stages. The two friends have performed separately for many years and are mutual fans of one another. As Clint tells the story “When arriving in Vegas back in 2000, I did what every performer does…I asked “Whose show should I see?”. Everyone told me about Earl Turner…and they were right. He’s terrific”.

These days you’re just as likely to see Earl in the audience for Clint’s solo performances as vice versa. But when these two collaborate for an ongoing series of concerts at Westgate’s International Theater, it’s the fans who will be rejoicing. 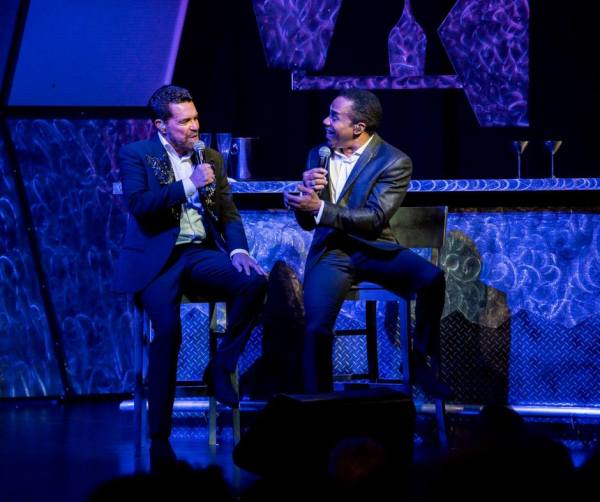 SOUNDTRACK offers a familiar premise – cover versions of songs you know and love…and what they mean for memorable events in your lives and theirs. The target demographic is mainly folks forty and over, yet the gentleman do justice to current hits as well. It’s a well-rounded collection of favorites sure to please every generation.

Much of the fun of this anthology comes from not knowing what’s next, so I’ll try not to spoil things by pounding out a track list. Just know that artists as diverse as Bobby Darin, Stevie Wonder, Prince, Ed Sheeran and The Beatles get the SOUNDTRACK treatment, all done in the inimitable styles of the two leads.

Much like Human Nature JUKEBOX at Venetian, SOUNDTRACK bounces through the decades somewhat randomly, adding to the sense of spontaneity that makes productions like this such a joy. Between the songs are humorous anecdotes that convey a warmth these two have clearly shared through the years…both onstage and off.

Holmes and Turner fittingly open SOUNDTRACK with “The Boys Are Back In Town”. But this is far from an all-guys night at the theater. Talented back-up singer Serena Henry comes front and center….and owns the stage with a set of classic songs made famous by other female vocalists. It’s almost disappointing when Serena steps back out of the spotlight. Expect to hear lots more from Ms. Henry in the future.

Both stars also have their own moments alone onstage. Clint demonstrates the way he learned to be funky from his African-American father (his mom was a “proper British white woman”, he tells us). Earl shares his evolution from country tunes to a spot-on James Brown impersonation that will have you on your feet and holding your sides with laughter. They come back together for a scatting session that will leave you breathless.

The eight-piece band led by musical director Christian Tamburr is as attractive as it is talented. Standout saxophonist Rocco Barbato brings a huge slice of “sexy” to several solo moments including a vocal/instrumental jam session with Holmes.

The large International Showroom stage, once home to the likes of Elvis Presley, Barbara Streisand and the returning Barry Manilow, is nicely utilized with simple but effective sets. Lighting, sound and visuals are all what you’d expect from such a well-known venue. Costuming is pretty basic with the band in black suits and the gentleman in shiny pants and sparkly blazers. Ms. Henry dazzles in a series of flattering ensembles.

One thing that I’m personally pleased to see is a minimum of sing-alongs and “I can’t hear you!” moments. Those live-performance cliches are so overused…and quite frankly need to be retired. If I wanted karaoke I’d go to Ellis Island Brewery, so thank you SOUNDTRACK for sparing us many of the cornball audience-participation segments.

With Holmes and Turner both having busy solo schedules, the dates for SOUNDTRACK are somewhat limited. A next round of performances will begin July 5th and a full schedule of upcoming shows is available here.

Be sure to stake out a future date and mark this show down on your list of Vegas “musts”. SOUNDTRACK is one memorable playlist that should not be missed.

SOUNDTRACK performs on select dates at 7 pm inside Westgate International Showroom. Tickets start at $48 (plus taxes/fees) and are available here. Travelzoo is running a special for seats starting at $24 by following this link.