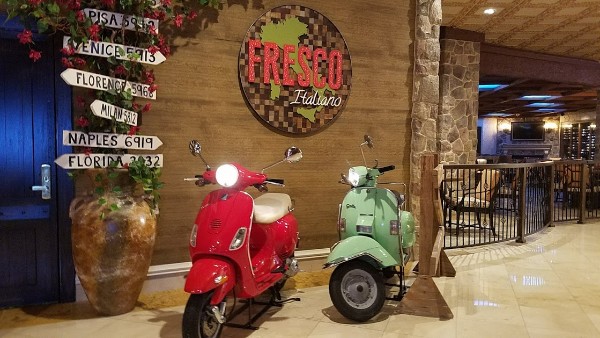 Outside the entrance to Fresco Italiano, two adorable Vespa scooters are amusingly parked. Almost symbolically, it seems as though they’ve been waiting for the right pair of riders to hop aboard and take control.

Inside, that very thing has taken place for two Italian immigrants who recently arrived to helm Fresco’s kitchen and operations. Despite the restaurant already being an established hit, this pair has elevated the Tuscan eatery to new heights.

Regular readers might recognize Fresco Italiano as my very first column when I launched this site last summer. Since then, I’ve dined here repeatedly, savoring every wonderful morsel. Not only is the food to die for, but the atmosphere and service scream “Italian authenticity”.

As you enjoy the dining experience, your party might be greeted by a lovely blonde with a distinctive Naples accent. General Manager Dora Pane loves to chat with her guests, lending a family-like ambiance to every visit. She’ll remind you of that favorite aunt who invites you to sit down at her kitchen table and “mangiare“. (I’ll be spending time with Ms. Pane for a profile article very soon.)

But of course, the big draw for this type of meal is the magic that happens inside the kitchen. That’s where Chef Paola Brugli comes in. This elegant native of Florence is the Executive Chef for Fresco Italiano and an absolute treat to meet. As busy as she is in the kitchen, Ms. Bugli also finds time to engage her guests and share a mutual enthusiasm for great dishes.

Kitchen time was ingrained in Chef Paola’s family traditions. She learned from her mother and grandmother how to make pasta, polenta and sauces. They worked together as a team, each doing something different to prepare a complete meal. Lessons from those collaborative efforts would be invaluable once Bugli decided to pursue a career in the culinary arts.

Chef Paola enrolled in the Istituto Professionale Alberghiero Aurelio Saffi of Firenze Italy in 1977. There she achieved degrees in Culinary Arts and Hotel Management, then spent the next several decades honing techniques in fabulous restaurants and destinations throughout Italy. 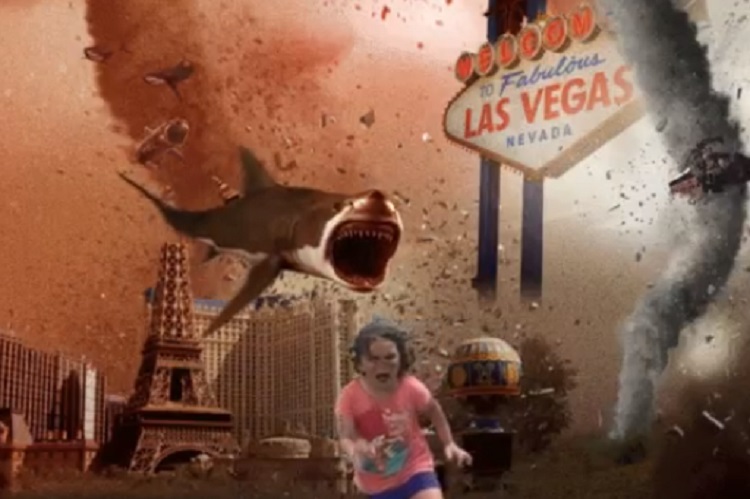 The shores of the Unites States eventually welcomed Chef Bugli to a new chapter and more career adventures. First came Atlanta, where she spent a decade in the kitchens of several noteworthy restaurants, holding positions as Sous Chef, Pastry Chef, Chef de Cuisine and Executive Chef.

Eight years ago Bugli settled into the St. Louis area after capturing the attention of a recruiter for Pinnacle Entertainment. There she spent a year and a half as Executive Chef for the now-shuttered House of Savoy, an authentic riverfront Italian eatery in the gorgeous Lumière Place Casino Hotel. This turned out to be her first position in a gaming resort, but fortunately would not be her last.

As luck would have it, Chef Paola worked under the mentorship of Jeffrey DeVito, current Vice President of Food and Beverage at Westgate Las Vegas. As she told me “It was my first job in a casino and I was a little concerned about that, but Mr. DiVito was always extremely supportive”. 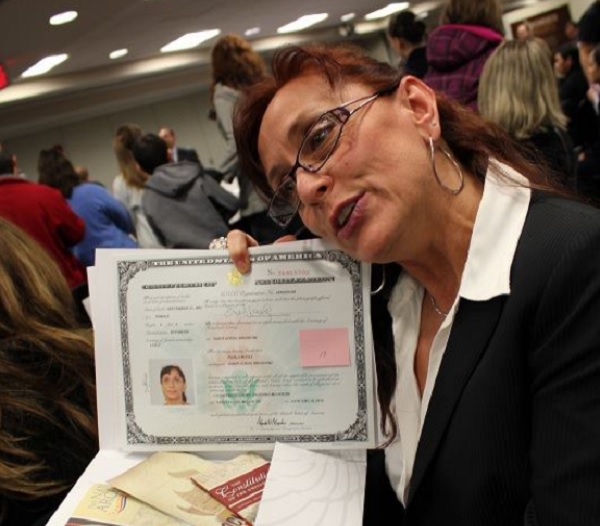 During her time in St. Louis, Chef Paolo proudly achieved United States citizenship in a wonderful ceremony held at the new National Archives, which was inaugurated for the occasion. The variety of cultures, climates and opportunities of this nation were now hers to explore without limit. 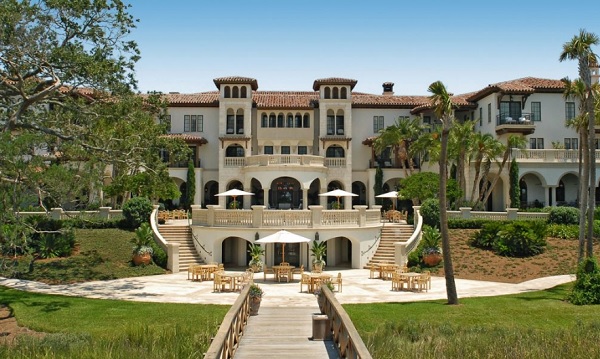 Next up was the lush Sea Island Resort, south of Savannah on the sunny coast of Georgia. There Bugli served as Chef de Cuisine for Tavola, a formal yet rustic Italian dining experience. Tavola‘s philosophy is “the soul of Italy isn’t just found on the menu. It’s around the table” which might explain why the Florence native was drawn there.

After dabbling in some consulting work in Savannah, it was off to Biloxi, Mississippi for a new position with Beau Rivage Casino Resort. As Room Chef for Stalla Italian Restaurant, Chef Bugli was once again able to bring her authentic style to another part of the United States. ”

Her philosophy of simple, fresh ingredients (“super-simple is the key” she likes to say) made her very popular with the resort’s guests. So much so that she remained there for over four years, creating an indelible mark on the MGM Resorts property. 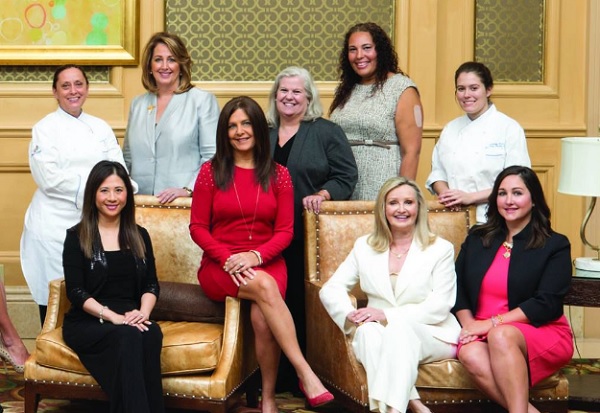 Alas, a change in corporate management began to crush this independent artist’s creativity, so it was once again time to move on. When asked if it was difficult to make so many changes in her life, her response was candid. “Maybe I’m a masochist but I like the challenges. Sometimes you have to find the right way to part. I don’t believe in creating failures…I like to give opportunities”.

As has been the case of so many gifted culinary artists I’ve profiled, Chef Bugli found new creative horizons via the food and beverage team at Westgate Las Vegas. In January she took over as Executive Chef for Fresco Italiano, one of my favorite restaurants in the city. And she was once again on a team overseen by Jeffrey DiVito. 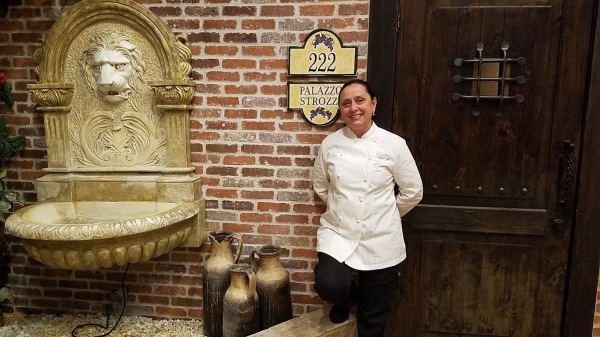 Coming aboard an established and successful venture would indeed offer Chef Paola some trials and tribulations but she was up to the task.

Everything in a restaurant is a connected process. A kitchen is like a pirate crew…we’re weird. There needs to be creative cohesiveness from front to back.

Working with General Manager Dora Pane, the two have taken the operation and streamlined it to reflect their own styles.

Food is so much about energies…your whole self. Shake people up a bit and you get good results. So we’re improving things like the service steps and our wine offerings. I’m also adjusting the flavor profile and retraining the staff with my cooking methods.

When asked what procedures she referred to, Chef Bugli explained:

It’s not enough just to follow a recipe’s ingredients. It’s the steps that matter. You see, a sauce isn’t just throwing everything into a pot and letting it boil. Certain ingredients have to be sauteed together first to let their flavors develop. Then others like tomatoes are added afterwards. You can taste the difference by doing things in the proper order.

Attention to detail is also reflected on the ingredients she purchases for her dishes.

The culture at our restaurant is respectful of the environment. In Italy it’s a concept called Zero-Kilometer Cooking. We can’t get all locally-produced foods being in the desert, but we can come pretty close. It’s also necessary to change our offerings depending on the season. A winter tomato won’t taste the same as one in July. People will know the difference!

Making a difference is what Chef Paola’s cooking is all about:

Guests are more educated now. Everyone is a connoisseur, so we approach Fresco Italiano with a friends-and-family atmosphere. This may be casual fine dining, but we want people to leave feeling like they’ve had an experience.

When asked about her new life in Las Vegas, Chef Paola gave a bit of a shrug. “I haven’t had time to get to know Vegas yet, really, except through the people I’ve met at Westgate. When I settle in, maybe I’ll start up a local women’s chef group”.

As for Sin City sights, the Florence native had plenty to say about the Strip. “Las Vegas replicates so many famous landmarks and they’ve done it beautifully. You’ve got Paris, Venice, Rome, Egypt. It’s amazing”.

She did have a word of warning for any future resort planners, though. “Vegas can do anything else they want, but they’d better leave Florence alone. We’re already perfect!” she chuckled wildly.