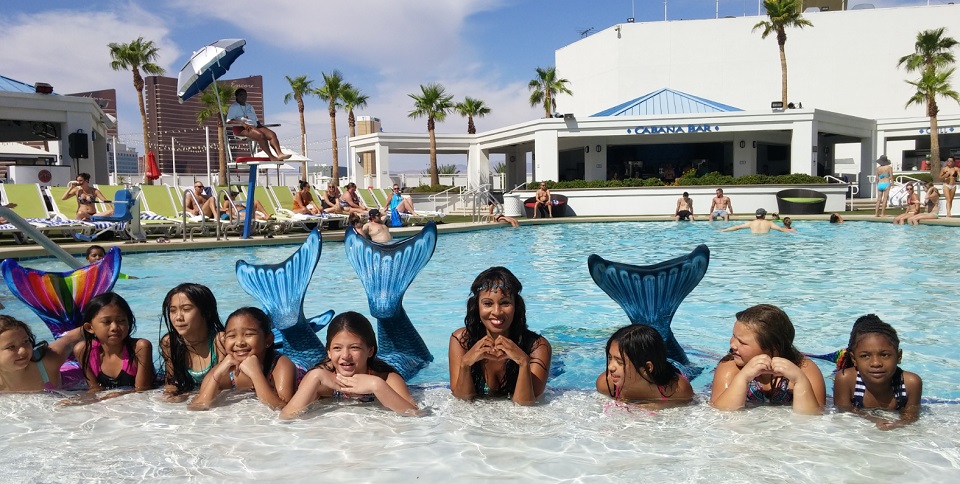 Weekend childrens’ classes are Westgate’s latest “outside the box”…

Going through my daily round of press release emails is a lot like attacking the pile of presents under the Christmas tree. Some of them I can’t wait to open up (“Chippendales Announces Latest Guest Host”). Others feel obligatory…like a Visa gift card from the mother-in-law (“Hash House A Go Go Introduces New Cocktail, Extends Happy Hour).

Then there are the ones that stink like rotten fish and get tossed into the garbage without opening (“Chris Brown Returns to Drai’s Nightclub”, “Mariah Carey Announces Christmas Show at Caesars Palace”). But my favorite emails are the ones that have you scratching your head in wonder. Things like “Learn To Be A Mermaid at Westgate Las Vegas”. Seriously?

Regular readers know that bringing the children to Vegas is one of my biggest pet peeves. But Westgate is a different kind of resort. A privately-held timeshare company, their twenty-eight locations cater to families around the country. Of them, only the Vegas location on Paradise Road has a casino (and a topless revue).

Naturally there is crossover of timeshare owners with kids, so Westgate Las Vegas offers a limited selection of entertainment and activities that appeal to the little ones. Shows like Magic of Jen Kramer…and Dirk Arthur before her. Dining at the glorious gardens of Benihana Village. And yes, weekend mermaid classes.

I’ll admit to initially being tempted to toss this press release into the trash folder. But “only in Vegas” experiences should be treasured. So after a long night of partying with the guys, I donned my shades and took the elevator down to Westgate’s expansive third-floor pool deck to meet Mermaid Farasha and the little ones who had lined up for that morning’s class.

Mermaid Farasha DesertSiren goes by the name of Farasha Millner when in human form. A professional belly dancer and mermaid performer, Ms. Farasha travels with her mobile tank and seashell to entertain, educate and promote the “Mermaid Code of Ethics”. In other words, she’s a positive role model for youngsters…and anyone in need of a little course correction through the sea of life. 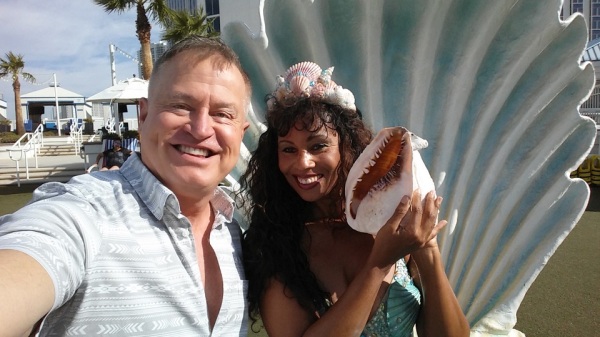 I was able to briefly meet Mermaid Farasha before the morning’s class and she was indeed glowing with compliments and positive vibes. “Oooh, you give off a great energy” she cooed in my ear. “You’d make a great mer-man”. Yes, I really was blushing.

Although the Desert Siren was eager to begin, one fledgling mermaid had already been waiting long before anyone else arrived. Nine year old Carson Parker of Florida was up at the crack of dawn…and ready to slip into her fin. 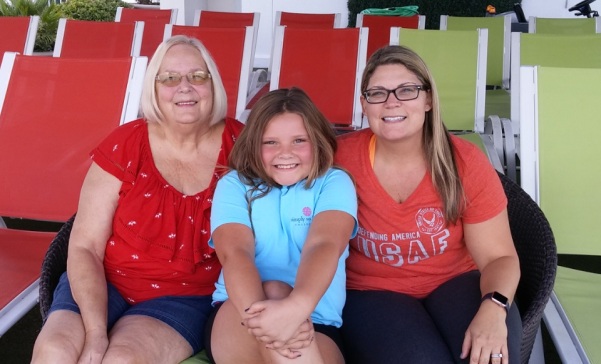 Accompanied by great aunt Becky Knowles (left) and aunt Kelli Wilkin, Carson was staying at Westgate while mother Melissa Parker, the reigning Mrs. Florida America, was competing in the Mrs. America Pageant. That event was being held the same weekend at the off-Strip resort.

With her mother in rehearsal for the evening’s show, Carson was eager to learn some new tricks in the water. As fortunes would have it, Carson was already an avid mermaid-er. Adept at doing front flips, she regularly practices at the family’s pool in Melbourne. 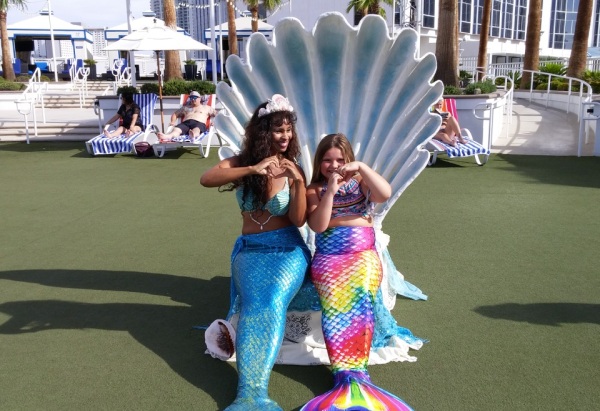 Word had gotten out to Vegas locals about the new classes, too. Seven-year-old Dionni signed up after her mother Tavia heard about Mermaid School from a Facebook friend…who in turn saw a piece on local station KTNV. She proudly posed with her new mermaid fin and couldn’t wait to begin.

Also attending that weekend was Abbie Losch, aka “Mermaid Coral”. You may remember Abbie as the adventurous daughter of Westgate’s own superstar Chef Aaron Losch, whom I profiled earlier this year.

Inside the pool’s merchandise shop, other youngsters were lining up to buy or rent their fins. Some were singing from Disney’s “The Little Mermaid”, whose soundtrack would soon be playing over and over (and over) on speakers during the morning’s lessons.

The class began with a preliminary introduction and explanation of basics for the newbies. The students were assisted in learning to don and stand in their fins. Then came introductions all around. The young ladies were asked to choose a personal mermaid name, then the real fun began. 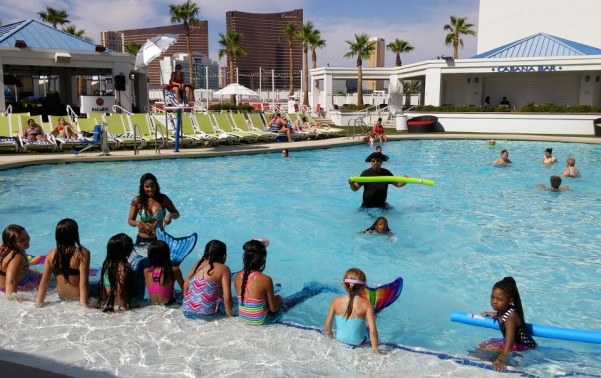 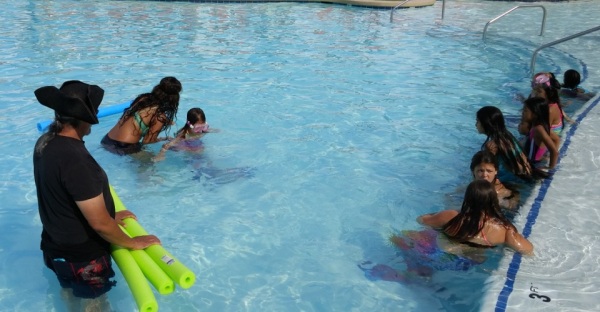 After a brief absence, the Desert Siren returned to the pool in full mermaid regalia and shimmied into the pool. Along with showing her students new maneuvers, Farasha emphasized the importance of support, encouragement and respect for each other and one’s own self.

“You’re in control. You are beautiful. In the mermaid’s world we support one another” she told them. The students learned how to tread water, give a “tail salute” and speak seafaring lingo like “Shello!”. But most of all, they learned how to be feminine, graceful and kind. “There’s so much you can do with this. You are a Mer!”.

As the class wound down, curious onlookers came over to see what Mermaid School was all about and pose for pictures. Then a young boy swam over to chat to Mermaid Farasha about being a mer-man. “I love your British accent, handsome!”. Yes, the classes are open to boys as well.

If interest continues to grow, there’s a possibility of adding adult groups into the mix. And why not? Apparently this is a new social movement. Mermaid Schools are popping up all over the country. And they’re a nice fit to Westgate’s other poolside offerings like sunrise yoga classes (Friday-Sunday from 7 am to 8 am, weather permitting) and the Silent Savana sunset sessions I told you about here.

Despite Farasha‘s suggestion that I try on the fins myself, I’ll leave that kind of fun to the younger guests. I’ll be content just to sip a fireball mojito and watch the activities from The Playground, Westgate’s 21-and-up dayclub that I told you about here.

That’s what’s so great about Sin City. There’s something for every taste. And just when you think you’ve seen and done it all, another WTF press release will appear in your in-box. Let’s hope the next one isn’t “Mariah Carey Extends Latest Residency”. There’s got to be a limit to the madness!

Tickets for Mermaid Class are available at Serenity Spa at Westgate’s 3rd floor pool deck. Call 702-732-5648 to purchase tickets by phone. Classes are capped at 15 students.