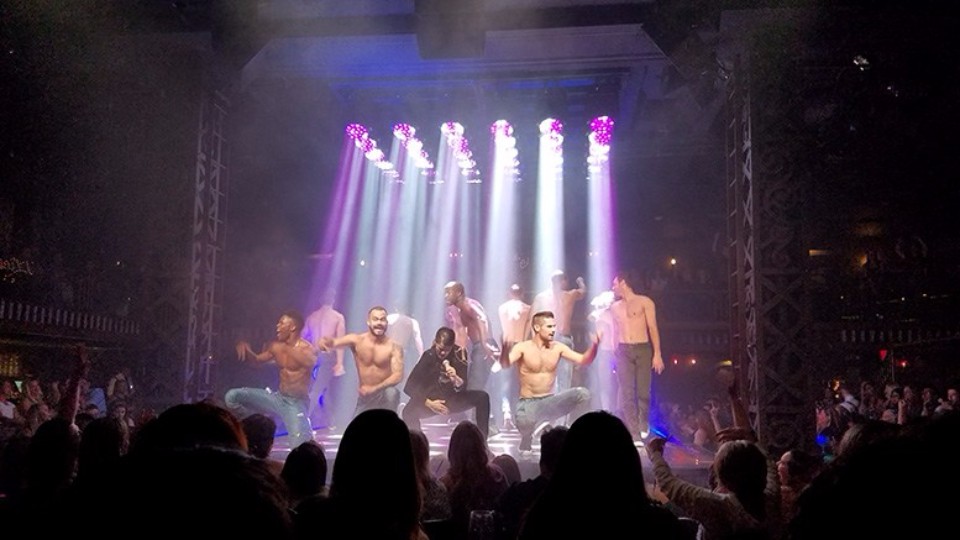 Poorly-conceived circus collapses under the weight of its own contradictions…

Imagine a bunch of “bros” arriving in Vegas, intent on having a rowdy time. They prop up their feet at Larry Flynt’s Hustler Club, booze and money in hand, eager to be titillated. But instead of bare breasts and g-strings, the party boys get some low-rent male comedian babbling about his problems…and the ladies stay clothed.

You can believe there would be booing, flying fists and sailing beer bottles within a few minutes if this happened to guys. And yet, that same bait-and-switch is exactly what you’re served at Magic Mike Live…with the genders reversed. It’s a whole lot of  pro-female “humor” and blah-blah-blah masquerading as a male revue.

Despite being named after actor Channing Tatum’s pair of male-stripper films, this live show has essentially ZERO to do with them. It starts off promisingly enough, with local favorite Mark Shunock (Rock of Ages) gliding into the audience with a flashy jacket and flashier grin, then quickly plummets down the stairs.

One would assume that Shunock is channeling the first film’s “Dallas” (loosely based on real-life Vegas resident London Steele of Kings of Hustler). That calculating club owner, as portrayed by Matthew McConaughey, would make the perfect campy host for a rowdy night out. Alas, after a few raunchy jokes about desert-dried vaginas and such, Shunock disappears entirely (a cardboard standee of him is brought out during final bows…I’m not kidding).

Next, a troupe of dancers enters the performance space, clad as your typical fantasy-hero types: cowboy, fireman, police officer, etc. A woman is coaxed onstage from the audience. It turns out that she is a plant…and subsequently the REAL emcee of the show. This abrasively-voiced harpy chides these characters for being misogynistic and cliched. But isn’t that what the movies were about?

What attracted audiences to the films were Channing and his hot Hollywood pals gyrating around in various states of undress, not the plot line. Complaints of “too much story” were even addressed in the sequel, wherein dance numbers and skin quotient were amped up.

Tatum and his production company, Iron Horse Entertainment, decided…after reading message boards…fans were demanding “more dancing and less story”. “Look, at the end of the day, it’s a stripper movie,” he says. Hence the extended dance sequences, with catchy tunes and screaming women in the background. The Straits Times, 7/8/15

But back to the show….the collection of “Village People rejects” are forced offstage by the actual dancers of MML. You’re told in no uncertain terms that these are the kind of guys that women TRULY fantasize about. Spotlights scan the crowd, searching for “a doctor, a musician, the nice guy with a job, someone who will rub your feet without being asked”…you know, the type of men that sex-crazed women flew all the way to Vegas to drool over.

The hostess then promises multi-cultural offerings in what’s to follow and proves so by lining up four men in deepening shades of brown.  She squawks “I’ve always wanted to have a mixed (bi-racial) baby!” in an irritating cackle. Imagine how offensive this scene would be if viewed in the context of a stage production of ROOTS. It’s as ugly and off-putting as it sounds.

Tatum has promised in interviews that Magic Mike Live would not reflect the movies (but has no issue with using the bankable name). Instead, his goal was for this project to focus on “female empowerment.” According to this show, what women want is just someone to impregnate them and pay their bills. It seems to me that women relying on men to get through life is the antithesis of female empowerment, wouldn’t you say? 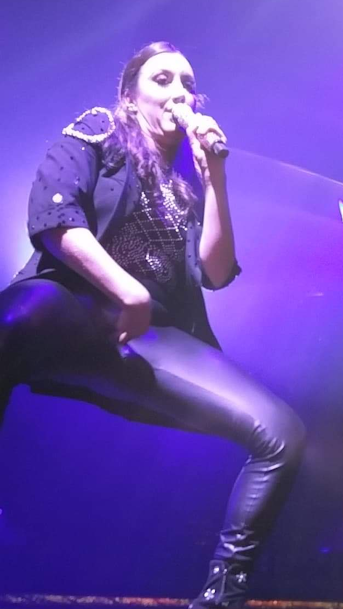 So if you’re heading to Magic Mike Live to get your guy-porn on, you’ve just learned in no uncertain terms that you are SOL. Fortunately, there are genuine, infinitely superior and far less expensive male revues in Las Vegas for ladies (and gay guys) to spend their entertainment dollars on.

The messages conveyed in MML are so conflicting that they’re delusional. The fun-sucking emcee, portrayed by little-known Chicago comedienne Lyndsay Nicole Hailey (with Vegas local Chelsea Phillips-Reid subbing on Wednesdays), turns what might have been a guilty pleasure into a treatise on man-bashing. Expect divorce rates to soar among ticket-buyers.

At this point, you might be wondering how anything from the Magic Mike films connects to this fiasco. That answer comes in two parts. First, Lyndsay prays to a “mystical unicorn” who rewards her with a bejeweled microphone lowered from the ceiling (a magic mic….seriously?). She uses said mic to lure a handsome waiter onstage to try his hand at a striptease. It turns out that he’s also a plant…an employee supposedly named “Mike”. Oh, brother.

In the film, Mike is a construction worker who persuades a new guy on the crew to moonlight with him at a dance club. In a lame effort to distance the show from the movie, Mike is now the newbie instead.  He claims that he can’t dance, so Lyndsay exposes him to a series of sequences designed to fire up his libido and get those hips gyrating.

What follows is a watered-down variation on Absinthe. Sets, props, and characters descend from the ceiling and rise from the floor. Singers, acrobats, aerialist and musicians appear, awkwardly draping audience members across a grand piano and the lap of a drummer.

Songs take center stage with relatively little in the way of actual strip-tease. The dancers are fully clothed for much of the proceedings. When they aren’t, you might find yourself wishing they were.

It’s a bumpy ride both onstage and off at Magic Mike Live….

The emcee struts onstage after each sequence, loudly declaring “how hot that was!”. At one point, that swagger becomes a stagger…her blouse and jacket are torn apart and her hair has fallen loose. “I feel like my vagina was just beaten up!” she exclaims. Is this entertainment or a PSA for battered women? Whatever it is, it’s in poor taste…and not funny in the slightest.

Exactly 54 minutes pass before the first guy ditches his pants. Even then, his church-friendly briefs stay in place. How do I know the length of time so precisely? Because I couldn’t stop staring at my watch, eager for this mess to end.

Before the show limps its painful but welcome finale, Lyndsay can’t resist one final reminder of the inadequacies of men. She urges the ladies in the audience to get to their feet and hold one another. “When’s the last time you slow-danced with someone?”, she asks. Thanks, MML, for that feminist group-therapy session. Can we have some fun now?

If you’ve noticed that I haven’t reviewed the dancers, that’s because they play such an inconsequential part of the production as a whole. None of them are particularly memorable. Not even “Mike”, whose transformation into the titular character is actually quite dull.

The saving grace of the production is the venue itself. LOTS of Tatum-infused cash has been laid out to transform Hard Rock‘s Body English nightclub into an absolutely glorious theater. The corridor leading into it is tastefully appointed (aside from dozens of oddly-empty picture frames). A narrow stairway leads you down to the basement theater, a multi-level beauty.

One oddity worth mentioning is the lack of a gift shop. Where are the t-shirts, calendars, posters and memorabilia? These things are standard at most Vegas shows. With more than a year of preparation since MML was announced, surely a line of souvenirs could have been produced and marketed. Very strange…as if Hard Rock had little faith in an extended run.

Update – since the original publishing of this review, an online store has been established. I’m uncertain if products are available at the showroom, as I’ve not been (and have no intention of going) back.

Once seated, a massive team of attractive ushers, bartenders and wait staff will make you feel welcome and pampered. A Hard Rock insider told me two months ago that all waiters and bartenders would be shirtless throughout their shifts (sadly, that’s not the case). But even without a show, I’d still stop there just to let them serve me a cocktail…or three.

The true standouts here are indeed the wait staff…a collection of charming, attentive and handsome lads that exude more charisma and sex appeal than anything you’ll see onstage. Imagine, if you will…the first fake-out (Village People vs. Modern Man) gives way to a SECOND fake-out, wherein the studly waiters who’ve been giving you excellent service suddenly set down their trays and take to the stage. Now THAT would have been different…and far superior to anything that MML currently offers.

As it is now, Magic Mike Live is a misandristic mess…an expensive and overblown bomb that’s about as sexy as Menopause – The Musical. It ranks alongside the first phase of Criss Angel BeLIEve as one of the most poorly-conceived Vegas productions of the past decade.

This is one major show desperately in need of a gutting and overhaul. Tomorrow wouldn’t be soon enough.

MAGIC MIKE LIVE performs Wednesday through Sunday at 8 pm and 10:30 pm. Tickets start at $75 (plus taxes/fees) and can be ordered here.