These days, the opportunities to say “Only in Vegas” are getting harder to come by. The lions have left MGM Grand.  The volcano at Mirage rarely erupts these days. Bowling with “glamazons” at Drink and Drag Lounge has faded into memory. But there’s an activity in Sin City that you most likely can’t do at home. It’s Señor Frog’s Drag Brunch at Treasure Island.

When I first heard about Treasure Island’s Drag Brunch, I didn’t think much of it. This writer has covered many weekly mixed-crowd events that quickly “petered” out (no pun intended). But during my weekend mornings at home in Oregon, I noticed plenty of Vegas friends tagging themselves and checking in at the Brunch on the official Facebook page.

Would this be the one that actually catches on? Chances were pretty high, as the concept had already been the rage at Señor Frog’s locations in Miami, New York City, and Fire Island Pines.

Then I started getting a Groupon offer that was very tempting. Buffet, unlimited mimosas and a show for $45.00? I was already a fan of Señor Frog’s menu and wacky atmosphere. Throw in some seasoned RuPaul’s Drag Race contestants (like CoCo Montrese, Desree St. James, Kahanna Montrese and India Ferrah) dishing out racy comedy and hit songs onstage and throughout the venue…and this makes for one heck of a deal. 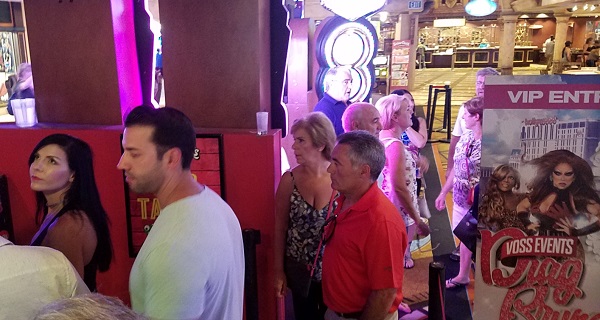 There’s also a VIP option with two-hour premium open bar and preferred seating. Prices are higher at the official site, which also lists a standing-room show-only option with cash bar for $10. I was told by an insider that the Groupon deal will be extended indefinitely, so that’s the way to go.

As luck would have it, I was just about to purchase my Groupon when I got an official invitation to review the brunch. Despite a whirlwind schedule, I accepted and arrived early enough to take some photos…and get an early jump on the  best seats. 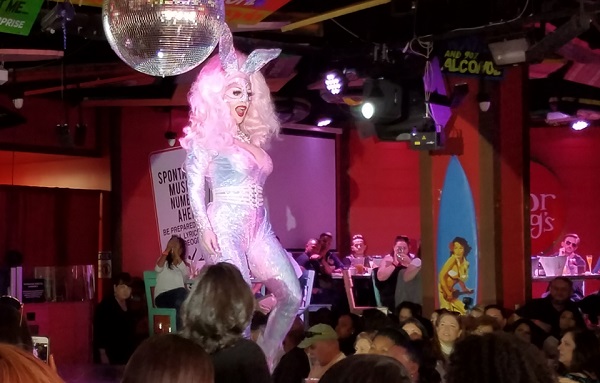 The venue on the second floor of Senor Frog’s overlooks the Strip (and lagoon for the former Sirens of T.I. show, another lost attraction) and has a dedicated bar and DJ booth. Most tables are large and “family style”, so you may make a friend or two before the show begins.

If you’ve never attended a female-impersonation show before, this is the perfect opportunity to lose your gender-bender virginity. Drag entertainment has been around for centuries, going as far back as ancient Rome. Even Frank Marino’s DIVAS Las Vegas has been running on the Strip (in one form or another) for over 30 years. 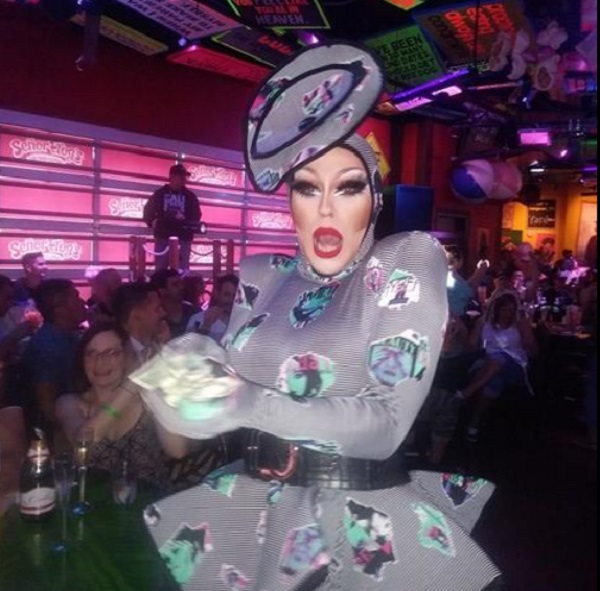 If you’re feeling a little insecure, the basic admission package includes unlimited mimosas. There’s also a cash bar staffed by muscular masculine bartenders. That should help to loosen your inhibitions and prepare you for the wild ride ahead.

The Vegas version of Drag Brunch is emceed by Shannel (Bryan Watkins), whom you may have seen at Divas Las Vegas, 53X at Paris or Piranha Nightclub. Shannel has lightning-fast wit, amazing skill as a female impersonator and just enough gravitas to act as house mom to hold the younger “girls” slightly in check.

The jokes flew fast and furious, as did the wigs, lips and elaborate costumes. A cast of four performers covered the entire floor with outrageous dance numbers, wonderful spontaneity and laughs galore. 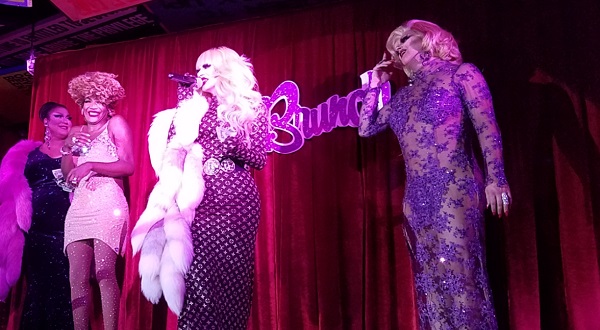 Be aware that drag shows are extremely interactive. You may find yourself as part of a comical moment, dance number or group toast. Almost anything can happen here, but that’s why you come to Vegas, right? (BTW, it’s traditional at drag shows to wave some tip money at the performers, so you might want to have some singles ready).

Since this review originally appeared on another site, I’ve attended Drag Brunch on numerous weekends and consistently have a great time. It’s a great choice for bachelor/bachelorette parties, anniversaries and any special occasion. They even hosted my birthday party this year, as you can see below.

If you want to return home with your own “Waking Up In Vegas” tale, this is the one that you want to tell. Senor Frog’s Drag Brunch is a smash hit. Bring your appetite, a camera…and a sense of adventure. But leave your stuffy, uptight friends behind. 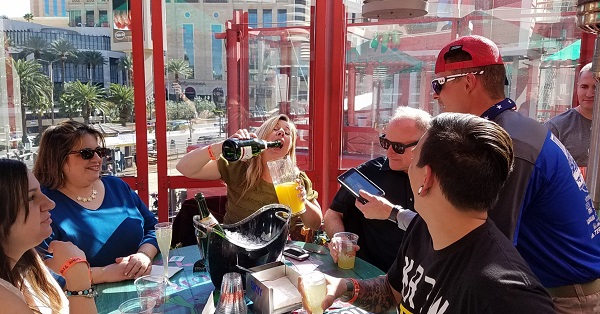 Senor Frog’s Drag Brunch is held every Thursday through Sunday at Treasure Island Hotel Casino. Seating times are 11:30am and 2pm. Ages 21 and over. Prices range from $10 entry-only cash bar to $79.95 VIP including open bar and photo with cast. Group rates available. Discount admission via Groupon starting at $45 via this link.

This review previously appeared on another site. It has been updated with current information and photos.

One thought on ““Drag Brunch” at Treasure Island is a Bold, Giddy Blast”