“Slip through the crack in the space/time continuum for a close encounter with a spaceship of fools”.

The politics of show business are not unlike those of the world’s governments. Coalitions are forged, battle lines get drawn and sometimes old enemies become allies. That’s what happened when the 2014 spectacular Vegas Nocturne abruptly closed at the Cosmopolitan‘s Rose.Rabbit.Lie Social Club a mere seven months into its run.

It’s a genuine shame if you missed out on Vegas Nocturne. That genre-spanning production delivered an entire evening of thrills and laughter, spread out over three full-length interconnected shows.

Some of Nocturne‘s best acts, like David O’Mer‘s bathtub seduction and Sean and John‘s tap-dancing routine were integrated into Absinthe. Other breakout performers like Piff the Magic Dragon and beatbox singer Butterscotch moved onto their own fame as well. 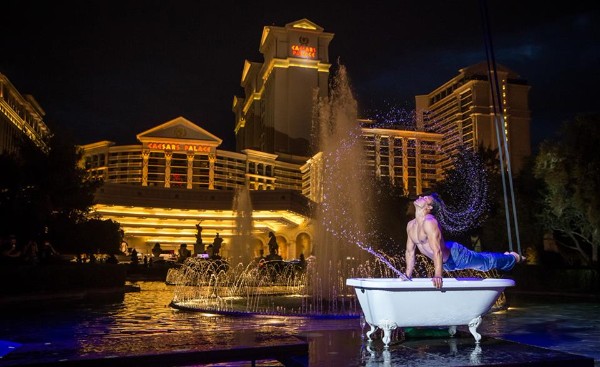 Vegas Nocturne‘s sudden closure led to legal battles that continued for years. Things got more complicated when it was announced that Caesars‘ hit show Absinthe would be moving into the performance space once occupied by Nocturne. Again, the big guns came out…and after a few volleys and threats, Absinthe stayed put (leaving the Rose.Rabbit.Lie theater empty for yet another year).

This month, all those differences have been put aside. A brand new variety show is about to launch in that sadly-neglected space. It’s called OPIUM…and it promises to be as crazy and off-the-wall as those other two naughty spawn of their Spiegelworld parents.

Last week, Spiegelworld held a cast reveal and teaser performance under the Cosmo’s Chandelier Bar. Emceed by “Harry M. Howie”,  the supposed creator of OPIUM (and a fictitious character a la Absinthe’s “The Gazillionaire”), the official Arrival Ceremony was comically timed to overshadow the opening ceremonies of the 2018 Winter Olympics.

Howie, looking nervous and disheveled in a tacky suit, spoke from a cheap portable PA system in front of a folding table adorned with lunchbox packs of Jell-o and a gallon jar of Costco Cheez Balls. He was eager to unveil the final artwork for his long-dreamed-of Sin City project.

“You make a poster and everything else pretty much falls into place” Harry stated with the arrogance of a seasoned Vegas producer. One might say that his confidence fluctuated as wildly as the authenticity of his Australian accent. With one quick tug, the veil was lifted on the official poster…and the drums started to play. 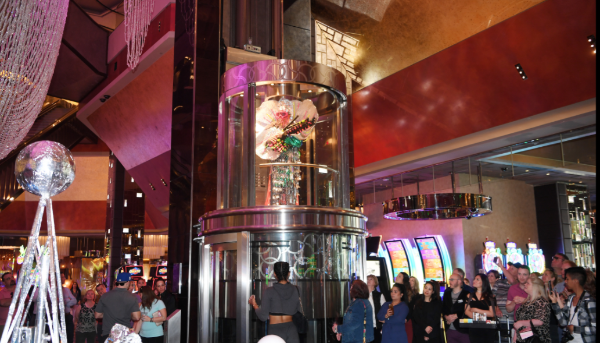 As various characters entered the Cosmo casino from all directions, the crowd began to thicken. A sax player belted out notes on the descending escalator. Towering interstellar God (and costume designer) Machine Dazzle made a grand entrance by way of the Chandelier Bar‘s glass elevator. They all came together to give the curious spectators a peek at OPIUM, which opens next month. 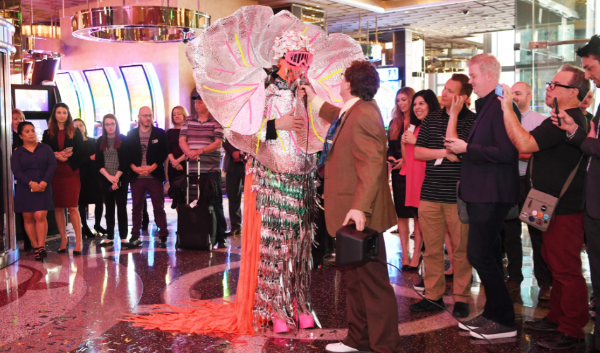 What happened next was hard to explain. The cast performed a rhythmic number backed by bongos and carrying pyramid-shaped props from which they extracted a change of costumes. Utilizing folding lawn chairs, suitcases, confetti and LOTS of aluminum foil, the OPIUM performers shared their home galaxy’s avant garde brand of music and dance:

It’s clear from the video clip above that OPIUM will be anything but ordinary. One can only hope that the new show will bring the same level of enchantment that Vegas Nocturne did when it first graced the Rose.Rabbit.Lie stage.

Although shrouded in mystery, OPIUM is already more forthcoming than Nocturne ever was. That ill-fated production asked members of the media not to reveal very much in hopes that guests would discover it on their own. Even my VegasChatter review, which spared held back most of the details, was heavily edited to blot out additional specifics. That over-reliance on secrecy, IMO, is what led to consumer confusion…and ultimately the untimely closure. 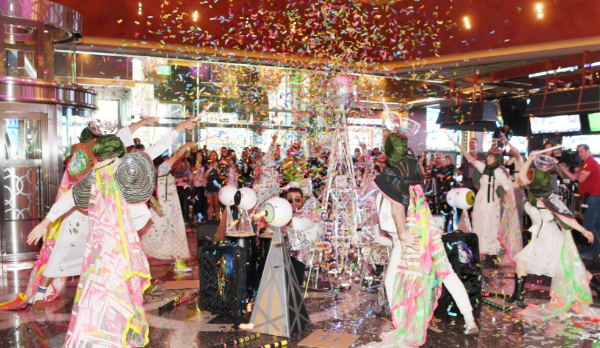 In addition to the teaser performance last week, the folks at Spiegelworld have offered this formal synopisis of OPIUM:

Journey on a trip to a new dimension of entertainment with OPIUM, the new show at The Cosmopolitan of Las Vegas from the creators of ABSINTHE. What is OPIUM? It’s fast, funny and funky. Completely off the planet. Remember the good old days when you sauntered into a Las Vegas showroom, martini in hand, while a pack of comedians and crooners bantered in front of the house band? Even if you do, one thing’s for certain: it didn’t look like this. Slip through the crack in the space/time continuum for a close encounter with a spaceship of fools.

They’ve also uploaded this peculiar featurette onto YouTube. I recommend jumping to the actual promo video which begins at the 2:18 mark:

So if your senses…and your curiosity…are prepared to be heightened, take a hit of OPIUM. I’ll be checking it out myself soon and will report back with a detailed review.

Preview performances for Spiegelworld’s OPIUM begin March 13, 2018 at Cosmopolitan’s Rose.Rabbit.Lie. Tickets are on sale now at Spiegelworld.com or by calling 1-866-973-9611. Use code VEGAS at checkout to receive the amazing price of $30 (plus taxes/fees) while offer lasts. 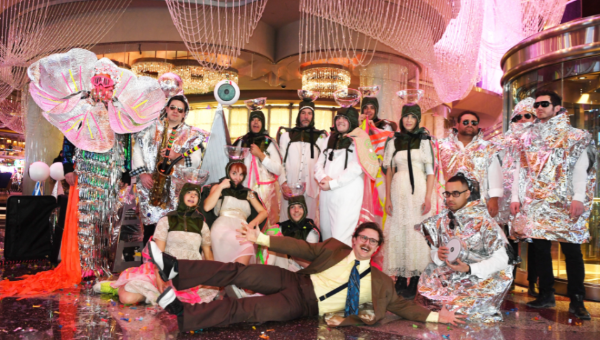