Absinthe’s new cousin is the schlocky 70’s sci-fi variety show that never was….

Imagine that you’re scanning the channels and come across TV Land, the cable network specializing in beloved 60’s and 70’s programs. They’re airing a weird science-fiction variety show that you don’t remember at all…and you can’t look away. 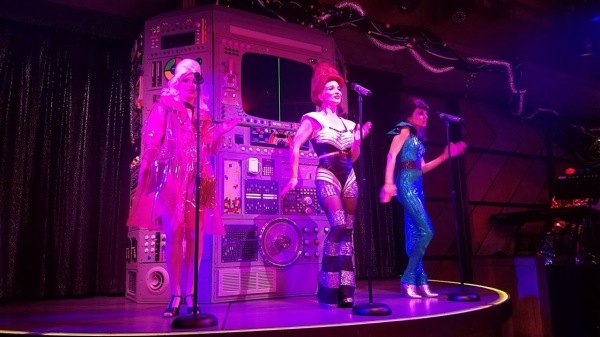 The wacky neon-and-spandex-clad passengers and crew of the starship OPIUM are headed towards Earth. For some reason they perform musical and acrobatic acts when not doing naughty things on and with each other. No, it’s not an episode of The Twilight Zone or the super-bizarre Brady Bunch Variety Hour (yes, that was really a thing!). It’s Spiegelworld’s OPIUM…and the ship of fools has landed at Cosmopolitan.

OPIUM takes over the space once occupied by Vegas Nocturne, another Spiegelworld creation. That lamented masterpiece of hysteria now lives on through OPIUM, which infuses the spirit of Vegas Nocturne with a psychedelic vibe all its own.

An ethereal mood is instantly established when you enter through Rose.Rabbit.Lie‘s ring of mysterious doors and head for the bar. The lounge is bathed in pink and purple neon tubes and 70’s kitsch like lava lamps and portable televisions (who didn’t have one of those?) line the walls. There, under a shower of electronic bleeps and Moog synthesizer music, you can peruse a 3D menu of specialty cocktails via an authentic View-Master reel. 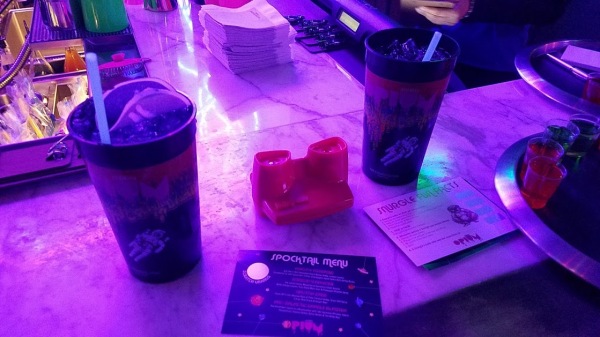 Comparisons to Absinthe will be unavoidable, but as my guest at a recent performance noted, OPIUM is the exact opposite of the nearby production. While that long-running hit at Caesars is back-to-back acts of world-class quality, OPIUM deliberately revels in its own awfulness. It’s pure camp and overacting on an epic scale.

It would be unfair to give away the plot or tell you too much about the characters. They’re pure delight and half the joy is in discovering them. Instead I’ll focus on some of the variety segments, which don’t all achieve the stellar heights of Absinthe but soar on their own plane of existence.

“Dusty Moonboots” is the songbird of Starship Opium’s crew. She (or he…I can’t be totally certain) belts out ballads and pop numbers with aplomb, sporting an outlandish series of costumes that seem re-purposed from a roadshow version of Priscilla – Queen of the Desert.

Vegas Nocturne returning performer Brett Loudermilk is unrecognizable as the ship’s resident sword swallower. His risque oral act is exactly what you might be thinking. Armed with a suitcase full of swords of varying shapes and sizes (along with a rather large “personal item”), Brett’s stunts will shock, nauseate and have you holding your aching sides from the laughter. 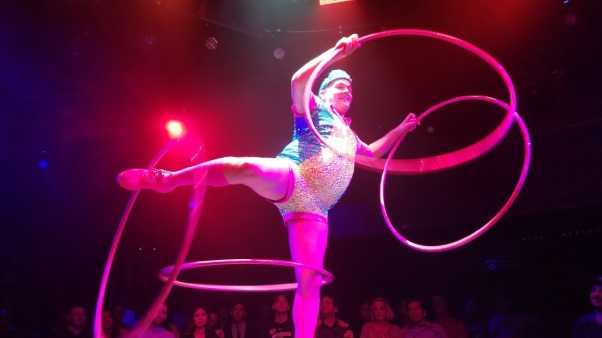 The ship’s all-purpose handyman “Scottie” seems determined to fly his inner rainbow flag through the solar system. Armed with dozens of bright pink hula hoops and streamers trailing behind his go-go shorts, the chubby crew member amazes with his balance, flexibility and grace.

By far my favorite sequence involved America’s Got Talent duo Christian Stoinev and Scooby. The hunky shirtless young strongman and his faithful chihuahua are so entertaining that they alone are worth the ticket price. This video clip from the performance I attended is a real treat:

Despite the seeming randomness of OPIUM’s concept, it really is cohesive…and surprisingly touching. There’s a story arc, character development, audience interaction and some pretty kick-ass music from a live band. If you’re a Freddy Mercury fan, you’ll love the Queen sing-alongs that form a framework of universal love and acceptance.

OPIUM’s goal is to amuse, titillate, revolt, befuddle and entertain. Most of all, it’s about delivering the unexpected. On that OPIUM succeeds beyond your imagination. It might not reach the heights of either of its Spiegelworld relatives, but OPIUM is one schlocky sci-fi tale that deserves to run for at least a five-year mission. William Shatner would be proud.

OPIUM performs nightly (except Tuesdays) at Cosmopolitan Las Vegas. Ticket are available online or at the OPIUM box office on the second level. Click here for show schedule and times. Discounts of 25% on select seats are available courtesy of our friend at VegasFool by clicking here.