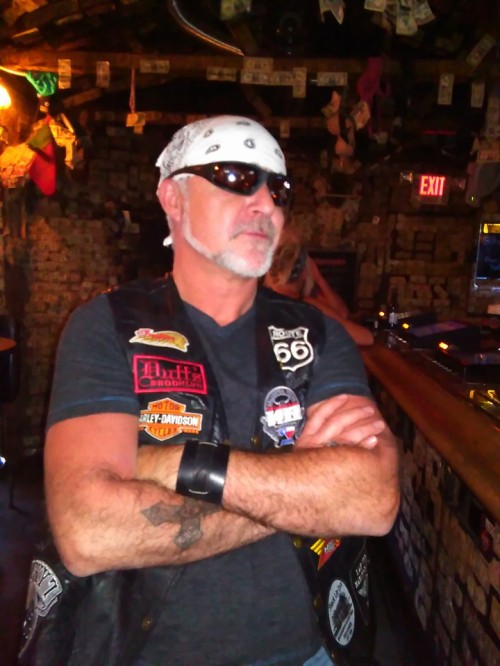 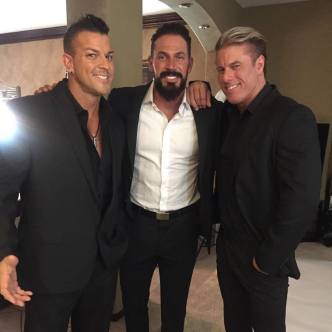 Long before Gloria Estefan and Miami Sound Machine were singing the praises of bad boys, James Dean and Elvis Presley were making rebels look both hot and cool. Today’s crop of Vegas hunks continues that legacy. Bad-ass, suave and still sophisticated, they know how to turn on the charm while driving your temperatures skyward.

Where you’ve seen him – EDGE Steakhouse at Westgate Las Vegas

Mike Thompson is like one of those mysterious characters you see in a spy movie. He’s all sophistication and a master of conversation when suited up for shifts at Edge Steakhouse. A master of social graces, Mike will remember your favorite cocktail and have you forgetting your troubles by the second sip.

But when the tie comes off, so does the Bond-like persona that Thompson’s patrons know and love. On go the mirrored shades as he slips into his tough-guy gear…and the wild side of Mike is ready to tear down the desert highway on his favorite motorcycle.

Mike’s background is as mysterious as where he goes when he takes off into the sunset. His personal life is closely guarded….much like that man who goes by the name “Bond. James Bond”. Is Mike a spy? Perhaps a vigilante hero? Nobody knows for sure.

What I do know is that Mike’s got a globe-hopping past, having worked in New York City, Dubai and London. A little research uncovered the fact that he received top honors in the Sofitel International Bartending Competition in Venice, Italy, too.

So perhaps this wild-child gentleman really IS some kind of undercover hero. If so, I don’t want to reveal his alter ego. What’s certain is that with several years of bartending experience right here in Las Vegas, Mike Thompson knows how to make one Hell of a cocktail. Visit him at the lounge inside EDGE Steakhouse soon. Tell him that Sam at Vegas Unfiltered sent you. And be sure to bring your friends. 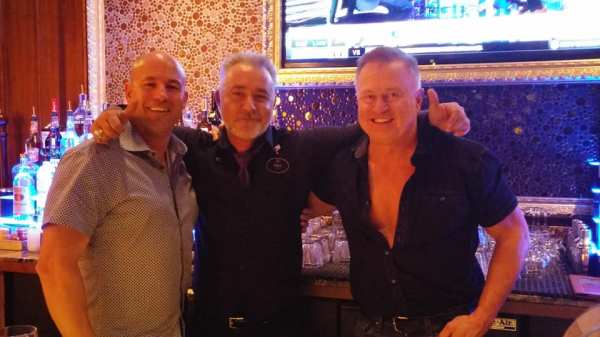 Hotshot realtor Jeff Desruissseaux and myself with Mike (center)

Chances are that when Santa Claus comes across Kris Davis on his annual naughty-or-nice list, he takes a deep breath and reaches for a bottle of bourbon. That’s because Kris is trouble….and he knows it. Yet the former Chippendale dancer is so damned pleasant and lovable that you can’t help liking him. Even if you want to slap his head from time to time. 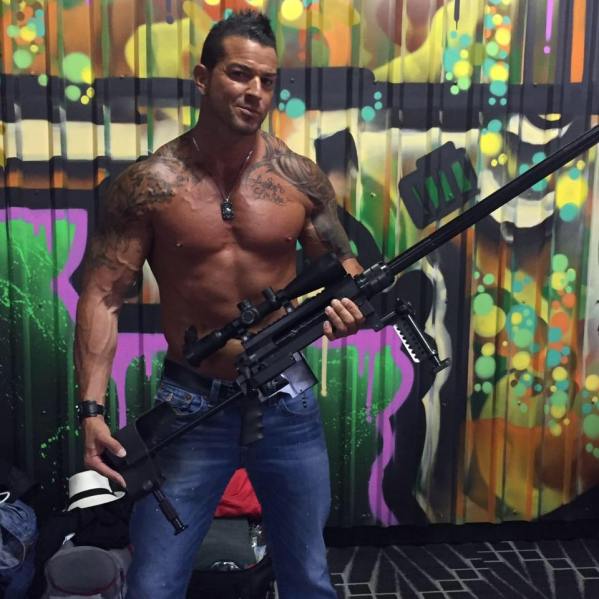 Davis is one of those guys who just doesn’t care about conventional behavior. He’s going to do whatever he wants to do…so you’d better get out of the way. But while he’s a man on a mission, he’ll willing to bring you along for the ride. Kris is such a popular social media figure that he had to create a second Facebook page and identity….by reversing his first and last names.

So what does this guy do in Sin City? Pretty much everything. From repping supplement outlets to dancing in male revues and posing for photos as a sexy fireman, Kris is all around town both day and night. Want to get into awesome clubs like Downtown’s new Troy Liquor Bar? Kris is your man. Looking to liven up a bachelorette party? That’s probably Kris, too.  Whatever enterprise he takes on, you know that Kris will be living the Sin City wild life…and having a great time doing it. 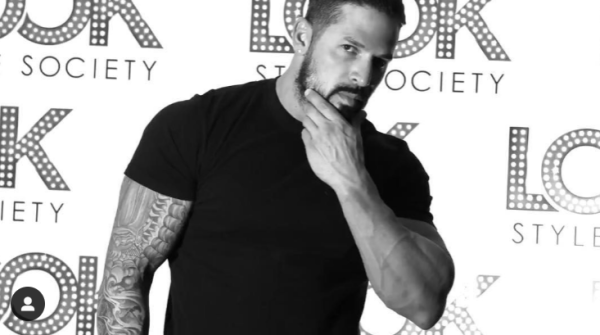 Every bad boy has a partner in crime. Mikey Perez has two. Not only does Mikey cause hearts to throb wherever he goes. but this wild-child stud has partnered up with pals Kris Davis (above) and Kevin Cornell Dockter (below) for their new enterprise Men of Chip in Dipp. This irreverently-titled party-hosting service relies on their past stripping/dancing experience to enhance your group’s night on the town.

Providing a limo and getting your tickets is just part of Mikey’s big package. He and the crew will entertain you on the way, then party with you and your guests well into the night. You will feel safe and secure with Mikey’s strong arms there to protect you, as this macho dude has a background in fighting at TuffNuff championships. Yes, Mikey is known as “Pretty Boy” in his MMA bio.

Whether you find bulging arms and a canvas of tattoos to be “pretty”, you can’t help falling for Mikey’s amazing white smile and warm glint in his eyes. He might come across as the toughest of the tough, but Mikey’s just as likely to give you a bear hug as to knock you onto the canvas. He’s the kind of friend you want to have. 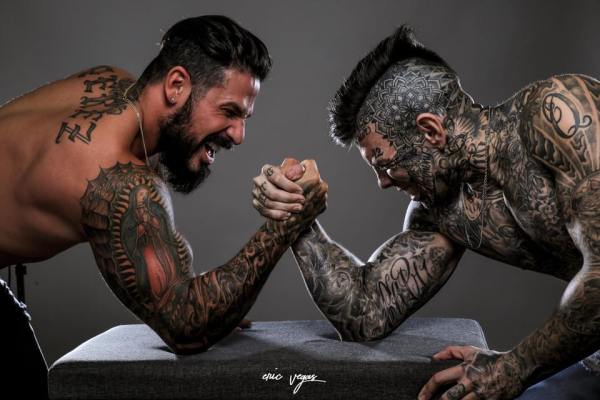 Our final wild child for this edition of Hot Guys of Vegas hails from St. Louis, but he’s a Sin City boy at heart. Once known for his Tarzan-like mane of hair, Kevin Cornell amassed a legion of fans around the world for his long-running stint with Chippendales. 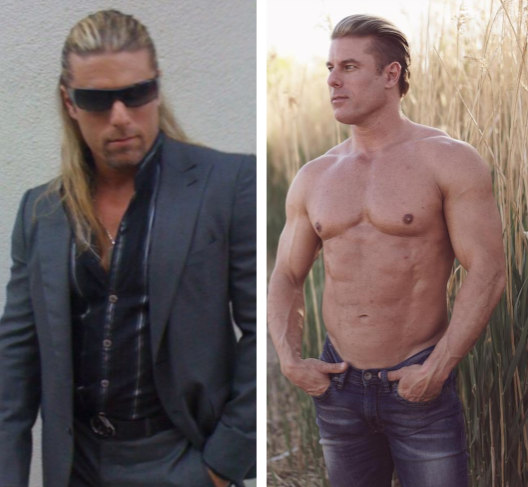 Another motorcycle fan (there’s definitely a pattern here), Kevin has been spending lots of time with buddies Kris and Mike for their new business. These days he’s sheared his locks, but Kevin is just as much a badass as his partners in crime and fun.

Like Mike Thompson, Kevin keeps his personal life close to his vest. Fortunately that vest is usually hanging open to display a torso that’s years in the making. He may not share his buddy’s affection for tattoos, but Kevin has what it takes to look both tough and tender.

One thought on “Hot Guys of Vegas: Tough Men and Bad Boys”