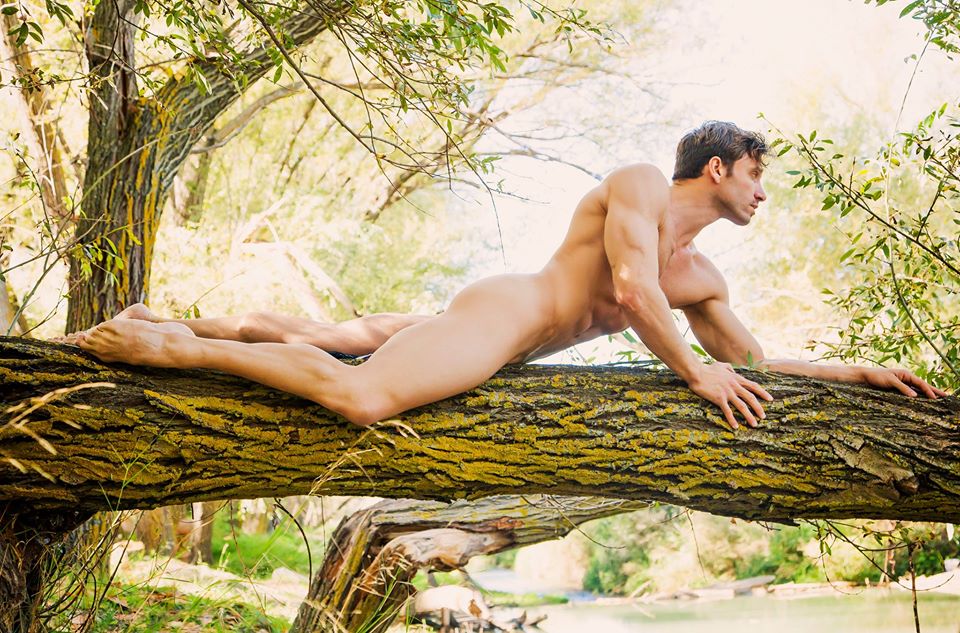 “People think they know who I am…they don’t. ‘AcroDave’ is a character. ‘The Outlaw’ is a character. My name is Davide Zongoli.” So begins my conversation with Sin City’s newest aerialist/acrobat. And it’s one discussion that I won’t soon forget.

Davide may or may not be the “The Abdominal Outlaw”, the flamboyant flying cowboy who sails over the audience in a state of near-total nudity at Venetian’s Atomic Saloon Show. If that statement confuses you, click here to bring yourself up to speed. 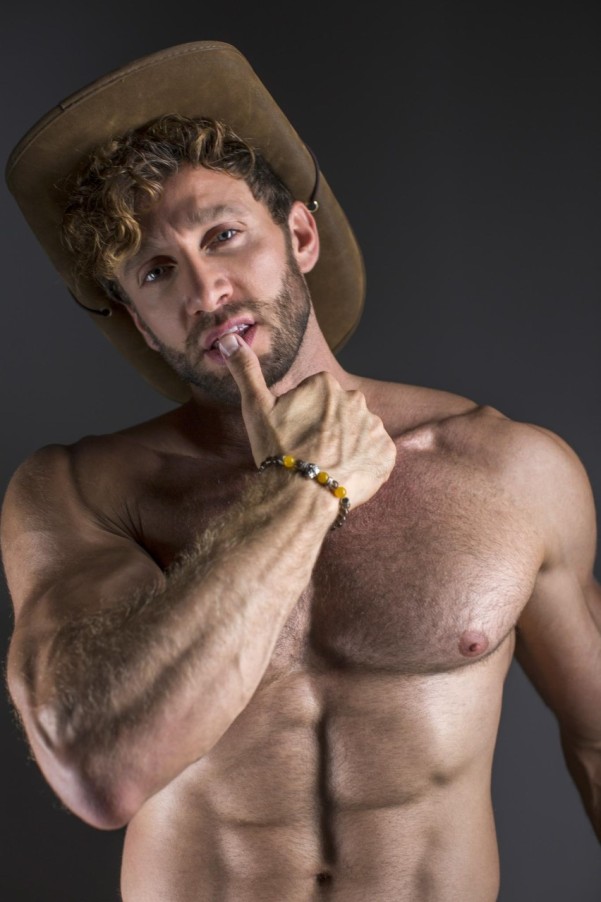 As we settled in for drinks at a coffee shop on the city’s west side, I couldn’t help noticing the stares when Davide (pronounced DAH-vee-dah) unzipped his jacket and released his tight, beefy frame from captivity. A barely-there tank top did nothing to hide the Italian hunk’s extraordinary physique.

But even when fully clad, Mr. Zongoli strikes an imposing figure. With his thick flowing hair, carefully-manicured scruff and chiseled cheekbones, he’d turn heads in any environment…even in Las Vegas, where pretty people are “a dime a dozen”.

So what makes Davide Zongoli worthy of a profile article and heaps of praise from his 329,000 followers? Well, that’s an answer many years in the making, built on a foundation of adversity and determination. And everyone loves a success story achieved through hard work.

Prior to being cast in the ATOMIC SALOON SHOW, the acrobat has been caught performing his jaw-dropping acrobatics in circuses across Europe, as master of the aerial pole, and was a 2018 finalist on Spain’s Got Talent. And as if that wasn’t impressive enough, The Abdominal Outlaw is also a swimwear and underwear model with more than 300,000 Instagram followers. If you follow him, you’ll understand how he got his moniker. – Jena Pugh, BestOfVegas.com

Long before Zongoli was the impressive specimen I saw before me on this sunny afternoon, he was a six-year-old boy suffering from scoliosis. As part of his treatment regime, doctors advised him to swim regularly. Taking an active part in his conditioning and therapy was something Davide became fully immersed in, so much so that he became a competitive swimmer until he was sixteen. This established a lifetime of discipline which segued into professional success in the world of dance.

After signing up for ballet, modern and contemporary classes at the urging of his friend, instructor Antonella Mita, the 17-year-old proved to be a natural. Within a year he had a contract to perform in Ivano Festival della Valle d’Itria and appeared in the televised musical “A Voice In The Sun” with popular Italian singer/actor Al Bano. In 2010 he was asked to participate in Leona Lewis‘s first international tour. 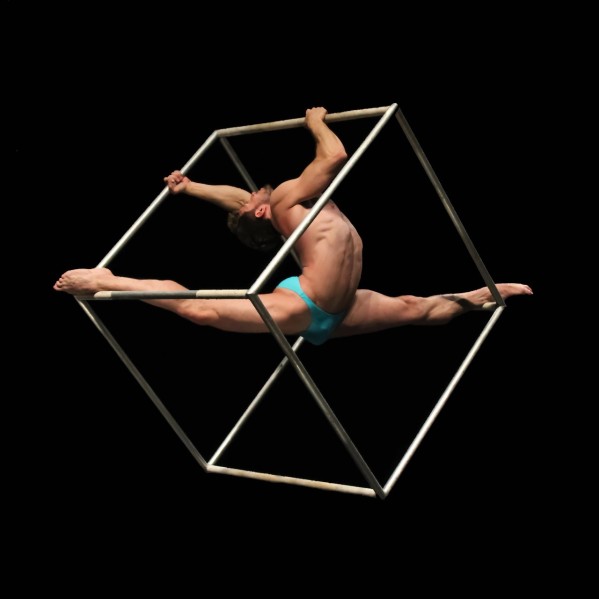 Despite demonstrating remarkable talent and aptitude, Davide faced resistance from nearly every direction. School instructors, peers, and even his family made it difficult for him to pursue what he loved (“Boys don’t dance!”). Bullied and pressured, he continued to learn the craft with the support of counterparts in the entertainment field. Zongoli’s parents had hoped for him to achieve a degree in law and initially resisted in supporting him, but eventually, they became strong allies too.

Perhaps it was the fact that dancing allowed him to appear on television with celebrities that won them over. Or touring the world in prestigious productions. Most likely it was the fact that their son was fully committed to being the best in his field. Whatever the reason, Zongoli was making his own rules and succeeding quite wonderfully at them. And he was thrilled that his parents were now attending his performances from Venice to Madrid.

As we were about to discuss his transition from dance to acrobatics, Davide’s phone rang. During the next few moments, I got to witness the qualities that made this performer worthy of being lured to Vegas from overseas. Sure, I’d already seen the stunning things he could do on stage and in the air…but what goes on behind the scenes is just as vital when you’ve reached this level. 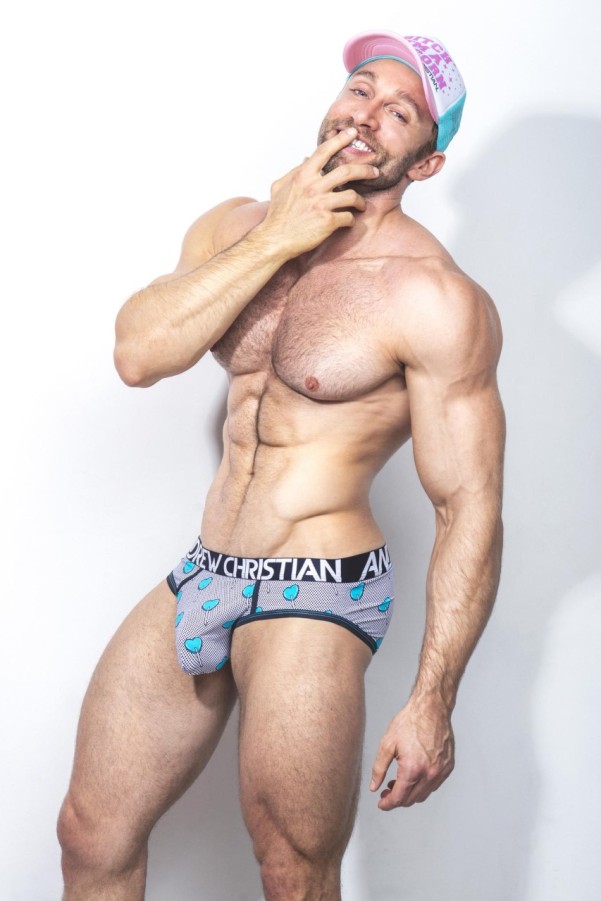 It turns out that one of Zongoli’s fellow acrobats had been sidelined from an injury and would be out for a while. Davide was being summoned to the theater to cover that performer’s absence and to rework some transitions. “They want me to come in at three. I told them I’d be there at five. It will only take thirty minutes to fix this and it will be perfect”.

Witnessing his confidence, I fully believed that the evening’s show would be flawless. With all of his experience and previous gigs, situations like this one become routine. Still, I was shocked at his candor with the party on the other end of the line. “That was pretty gutsy” I gushed. Davide just laughed. But what some might view as arrogance is actually earned. “This is why they hire me. I’m good at what I do. I’m a professional and will take care of this. Nobody will realize that someone is missing”.

I asked Davide what the audition process was like for Atomic Saloon Show and once again he chuckled. “I don’t audition for parts. People can see what I do on the internet. It’s all there. If it’s something that I’m interested in, I send a video.”

For many Vegas performers, the genres of acrobatics, dance and competitive sports frequently intersect. This allows them to become more commercially attractive and useful in the field of entertainment. Davide found himself transitioning from traditional dancing into pole dancing, a talent that drew him national attention on Spain’s Got Talent. It’s also a skill that’s highly featured in Atomic Saloon Show.

Wowing the judges in Spain’s Got Talent 2018

As with swimming and dancing, Zongoli quickly took to pole dancing and once again rose to the top. From his bio:

At this point, our conversation bounced around from relationships (he’s single) to recreational activities (all I do is train, eat, work and sometimes go to Piranha), and of course, sexuality. Anyone who follows Zongoli’s Instagram page is aware that he’s a brazen, no-apologies member of the gay community. Then there’s OnlyFans, where he shows just about every asset. His stage character shares that bold sexuality, so I asked Davide if Spiegelworld had any concerns about his personal and social media activities. 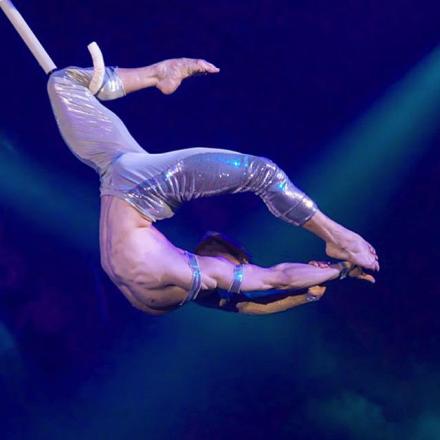 “Not at all. They’re supportive of my ideas and they’re great to work with. They allowed me to be myself and even let me add in a kiss with _______ (I won’t spoil the surprise here). It was my idea to bring the nuns into my act, too. People love it and it works great.”

Considering the current, volatile state of live entertainment in Vegas, I wondered if Davide had fears about relocating here for a brand new show. “No. I already spent enough money to stay for a while. I have a car, furniture, an apartment. Five years is the plan. I can always get another job if I needed to, but I love my show and working for Spiegelworld.”

While Davide doesn’t necessarily have intentions of making Las Vegas a permanent home, he’s up for being flexible. “Where I came from, everything is within a few blocks. Your friends are all around you and everything you need is near. Here, you drive drive drive. Everyone knows each other but they’re over here, over there. But, you make plans and life changes them.” So…who knows?

Planning and self-awareness are traits that have allowed Zongoli to curate a perfectly polished image known as “AcroDave”. That’s the name he goes by on Instagram. Much more than a public display of selfies, the account represents another facet of his business, one that generates brand association and of course, income.

Davide may not have gotten that law degree, but he would have certainly excelled at marketing. As he explained it, every product, location or photographer he collaborates with is expected to have a similar or greater level of public presence. Every choice is one that can offer growth and a heightened degree of exposure. He’s currently a brand ambassador for both JJ Malibu and Andrew Christian undergarments and is about to launch his own line of clothing.

“I’m not a model. I’m not that tall and not that young. But I know how to look good in pictures.” Every photoshoot takes several days of planning. It’s unusual for a fitness/physique model to have body hair, but Davide said that Atomic Saloon Show wants that look for his character. So when a session is coming up, he’ll trim his body hair a few days beforehand, allowing time for any skin irritation to subside. Then he meticulously grooms and shapes it.

Nothing is left to chance when it comes to a photo shoot. Photographers must enter an agreement to immediately download a copy of each raw photo taken before he’ll leave the studio or location. Then Davide will retouch the final shots after they’ve already been edited by the photographer. “Those photos will be around forever. This won’t be” he says, pointing to a blemish on his bicep. “We get pimples. We have scars that will fade. I want everything to be perfect.”

Perfection is what sets apart the best from the rest. And scars, both emotional and physical, will indeed fade with time. But for performers like Davide Zongoli, who respect their craft and the audience that pays to see them, the impact of their talents will remain long after the final curtain falls.

3 thoughts on “Look! Up In the Air! It’s Davide Zongoli aka ‘AcroDave’!”