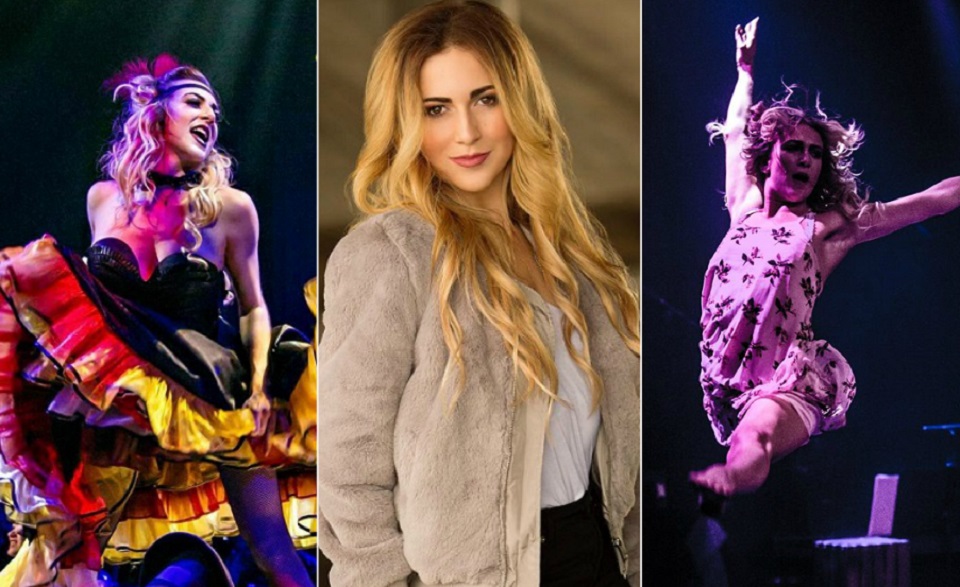 Ever since its humble beginnings inside a small Los Angeles nightspot, BAZ: A Musical Mash-up has boasted a fluid cast. Performers and celebrity guests regularly step into and out of six iconic and several supporting roles. They often swap characters and lines…sometimes within the same performance, making each night a unique experience.

The genre-bending BAZ musical, a creation by LA-based For The Record, recently celebrated its 500th performance inside a custom-designed venue at Palazzo Resort. Although its tradition of rotating casts continues, one performer has been there through four different dance partners. Her name is Savannah Cross…and she’s someone you’ll want to experience on your next trip to the Strip. 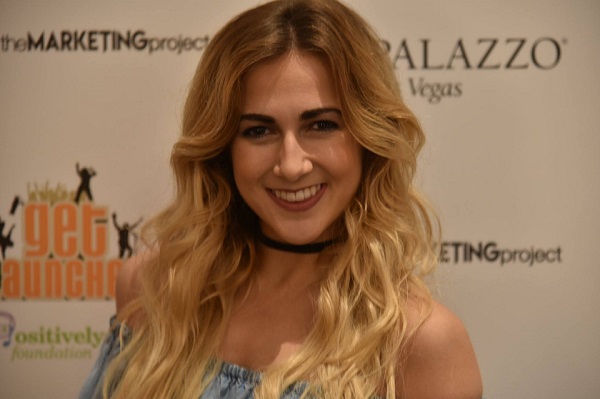 Savannah grew up in Sandy, Utah, just south of Great Salt Lake. She spent her earliest years learning to dance at several studios around her home state.

I started dancing at the age of 6.  Watching my older cousin compete is really what drew me into dance.  I remember thinking to myself, this is it, this is what I want to do.  From the time I started training at 6, I just never stopped and got even more immersed into dance.

During my first couple years of dancing, I saw the movie Center Stage and fell in love.  I loved the idea that dance was something I could make a career out of and watching this movie made it all even more real.  I also loved the work, energy and sacrifice that the dancers in the movie put into this crazy art form.

During high school, the ambitious teen traveled around the country with Hollywood Connection, a company dedicated to preparing dancers for their commercial careers. Despite her young age, Savannah performed in a variety of productions that displayed skills in hip-hop, contemporary and ballroom styles. 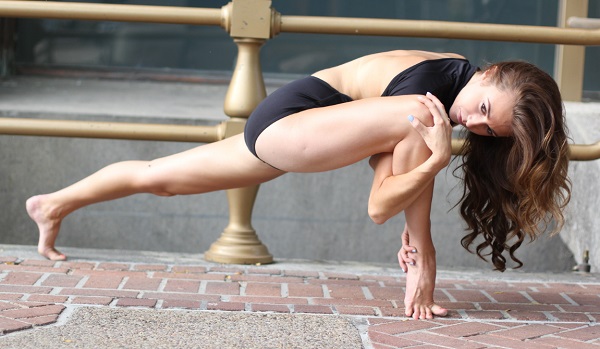 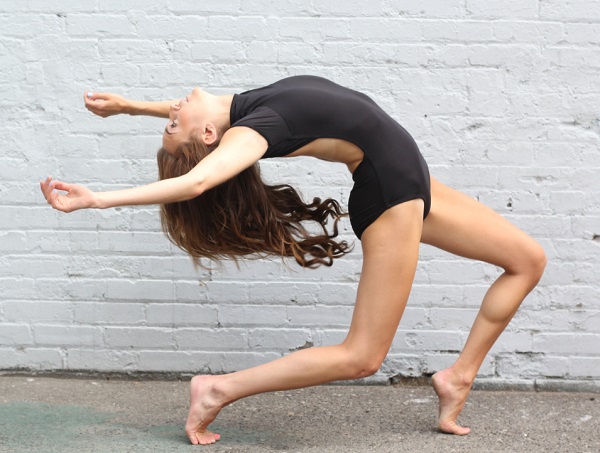 After graduating from high school, the dynamic young lady enrolled at the University of Utah‘s College of Fine Arts. While there, Savannah was member of their Performing Dance Company, which gave her the opportunity to work with several famed choreographers. As a result of her hard work and the enormous potential she displayed, Savannah received the prestigious Dizzy Feet Foundation Scholarship for her 2014-2015 year. 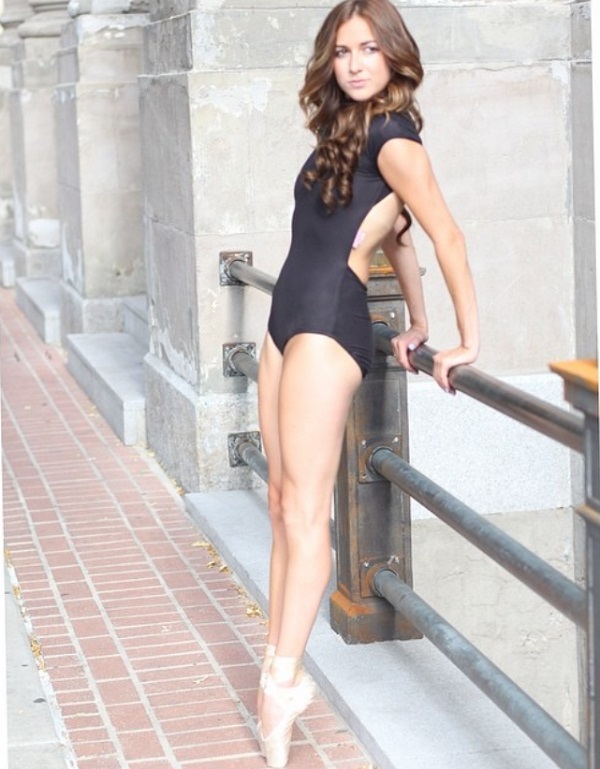 While less ambitious college students were spending their summers sipping margaritas on Mexican beaches, Ms. Cross was in Leeds, England, receiving intensive training at the Northern School of Contemporary Dance. And somewhere in those college years she managed to become a finalist on Paula Abdul‘s Live To Dance and appeared in a music video for singer Shaun Barrowes. 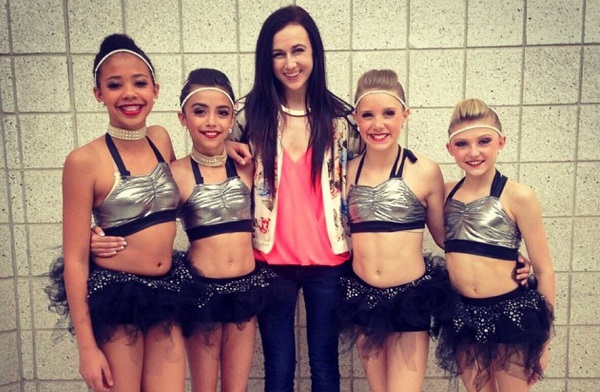 After earning a Bachelor of Fine Arts degree in Modern Dance, Savannah became an instructor at Utah’s Elite Academy, a unique dance studio that teaches children as young as preschool age.  There she inspired other up-and-coming dancers and shared the knowledge she’d gained from an already extensive background.

Aside from dancing, I have really found a passion in teaching.  I started teaching dance when I was 18 and instantly fell in love. I was so lucky to have such incredible and diverse teachers growing up and because of this I felt very informed when I first started teaching.

It was obvious that the girl from a small town in Utah was destined to accomplish great things. With the unending support of her loving mom…and her father as a faithful companion/escort to countless auditions, Savannah’s determination would soon pay off. 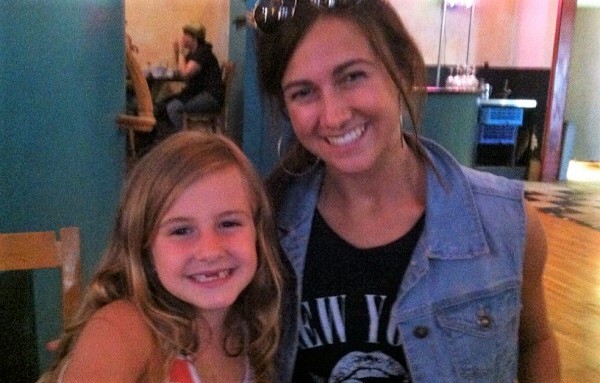 I have the most amazing support system and especially wouldn’t be where I am today without my mom and dad. They sacrificed so much to let me follow my dreams.  Every vacation we ever took as a family was always for dance.  A large part of me sticking with this art that can be so hard and grueling is because of those two.  They never gave up on me and every second of everyday, they believed in me.

I have one sibling, a 12 year old sister named Dylann.  She is now starting to dance and train heavily and it makes my heart so happy.  Watching her flourish makes me want to be the absolute best version of myself each day.

As with so many other promising artists, Savannah Cross decided to try her luck in New York City. Although she had success there, a turn of luck would lead her to the bright lights and neon of the Las Vegas Strip. 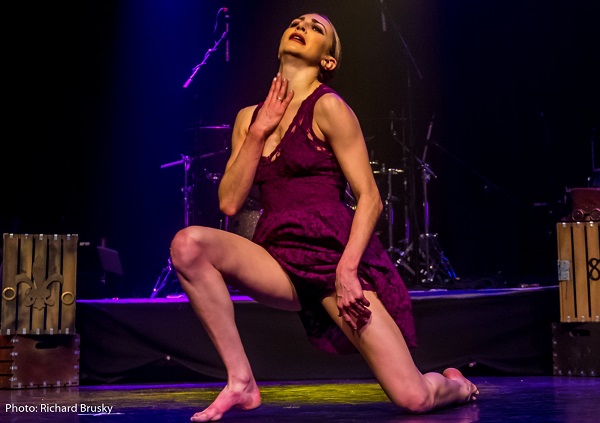 The innovative Los Angeles-based cabaret troupe For The Record Live was catching on like wildfire. Their musical interpretations of the film works from directors  Quentin Tarantino and John Hughes were drawing raves…and crowds. Their biggest hit so far was For the Record: BAZ, built around the scenes and music of avante-garde Aussie filmmaker Baz Luhrmann.

The production, interweaving love stories from Luhrmann’s contemporary re-imaginings of The Great Gatsby, Moulin Rouge and Romeo & Juliet was given a short stint at Mandalay Bay’s LIGHT Nightclub. Plagued by problems with the venue and its relationship with Cirque du Soleil, BAZ closed prematurely…but refused to die.

In 2016, Palazzo Resort announced a relaunch of the newly-named BAZ: Star Crossed Love. Cirque was now out of the picture and Venetian/Palazzo pledged full support of the acclaimed musical. This latest version of the long-evolving production would open with a mostly-new cast, a reworking of songs and scenes and a custom theater designed to showcase its cabaret-style roots. 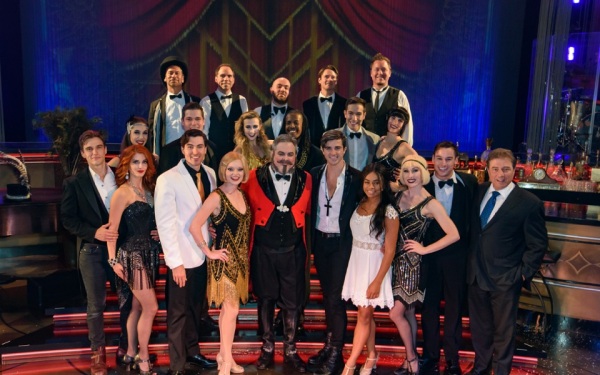 What would eventually become my 2017 Best Production Show in Las Vegas was about to gain a brand-new ballroom star. This time, Savannah would be required to sing, act and play characters in addition to swirling around the stage. Here’s how she became a part of BAZ…in her own words:

I really never imagined I would be a part of a show like BAZ. Before I joined the cast, I was dancing for two contemporary companies in New York and I really thought that was my path. When I initially joined the show, I was somewhat hesitant having to sing and act, but now have come to realize that I have such a passion for the two. I do strongly believe that my background in dance and immense training that I did all over the world and in different styles, informed and directed me as a strong actor. 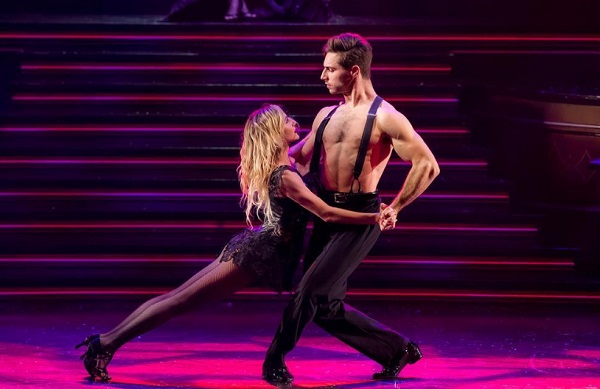 My initial start into the show was such a whirlwind! I received a phone call from a fellow dancer/friend who I hadn’t heard from in years. She started the conversation totally casual, and a few minutes into the conversation asked me if I would be interested in BAZ. I fell in love with the structure of the show and the incredible talent she described to me. Within days, I got a phone call that I was chosen for the role of Fran! I felt so incredibility lucky to be cast in the show without For the Record and the management team ever seeing me in person. 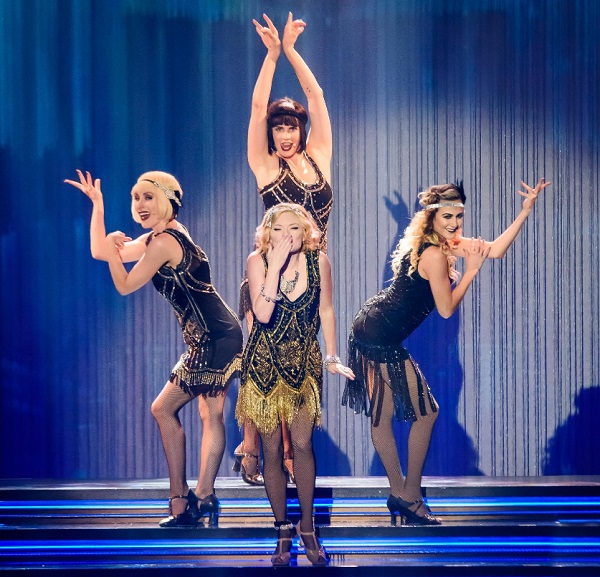 Everything happened so quickly, with only 3 days to learn the entire show, I became the first new cast member to come into BAZ. I instantly knew that I was meant to be here doing this amazing show. As of now, Scorsese: American Crime Requiem (based on the mafia films of Martin Scorcese) is the only other For the Record show I have seen, but it absolutely blew me away!!! I saw the show in Los Angeles with some others members of BAZ and I sat there thinking to myself, how lucky am I to be part of such an insanely talented family. 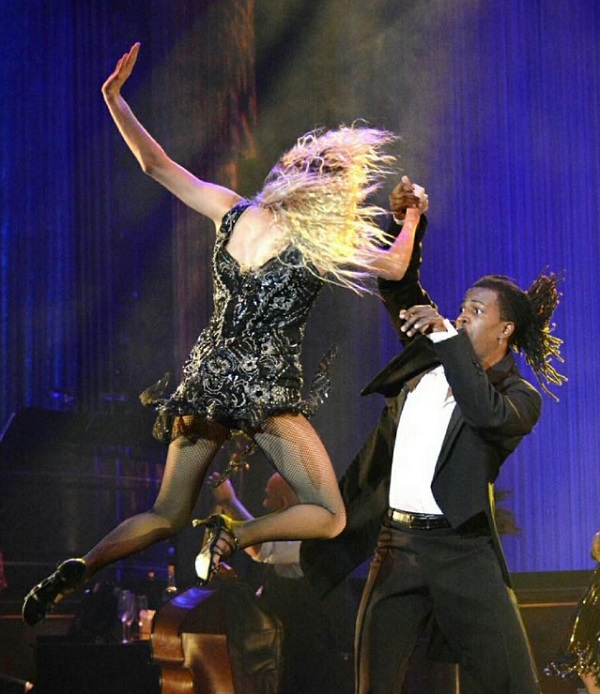 I have now had four different partners in the show and I will say that I have really been lucky with each boy. Two of the four partners are also from Utah and we actually grew up dancing together, which made the transition pretty simple. But I will say that there is an emotional toll when a partner leaves.

You end up building such a connection and relationship with each other in which you fully trust each other. I do think that it often feels like a “break up” to some extent and can take a minute to rebuild an entirely new connection with someone else.

Being able to build a connection between herself and others is definitely one of Savannah’s gifts. Whether it’s with her fellow performers, the people in the audience or her own students, Miss Cross is magnetic, energetic and completely mesmerizing. 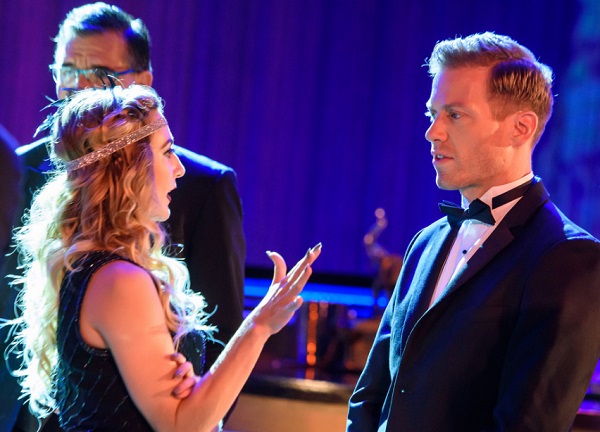 This writer was fortunate enough to have once been Savannah’s student…for a day. As a member of the media, I was invited to participate in BAZ Boot Camp last summer, an event that allowed members of the press to live a day as a performer at the Palazzo Theater. 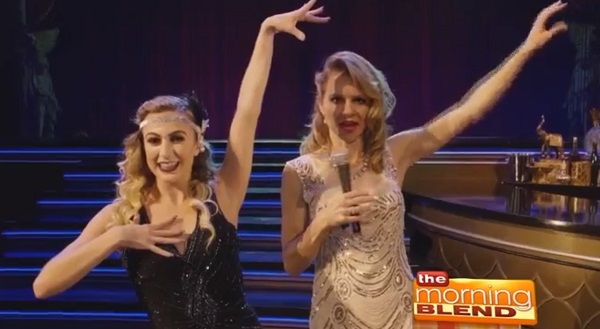 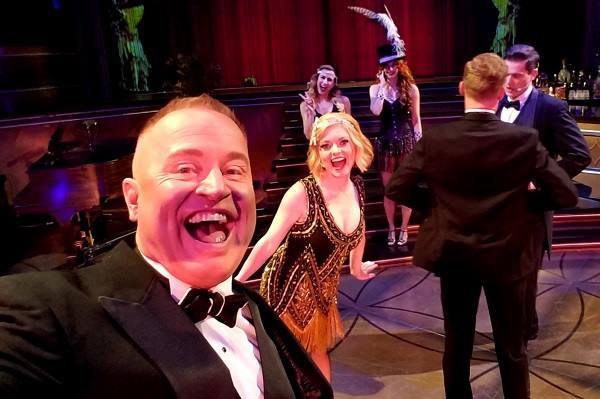 Savannah (center, rear) keeps a watchful eye on yours truly during rehearsal…

Despite my having two left feet and a pair of wobbly legs, Savannah and her dance partner Marcquet Hill rallied and turned us into dancers in a few short hours. Savannah’s positive reinforcement and patience were especially memorable. 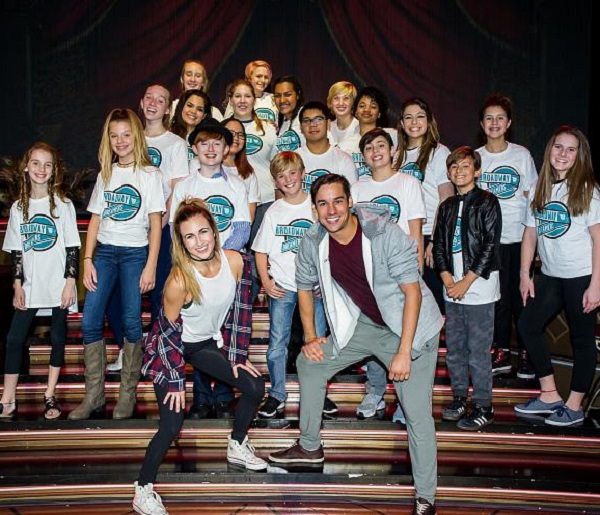 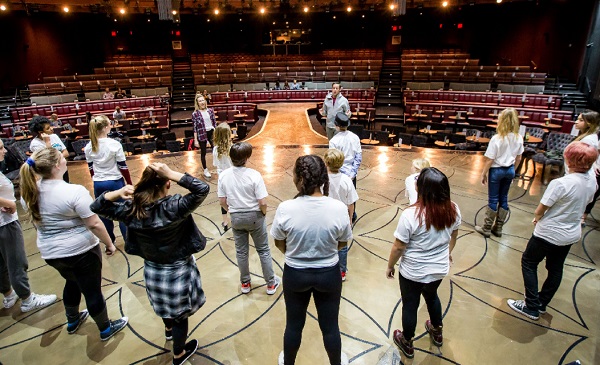 Fortunately, the next round of students Savannah and cast mate Patrick Ortiz shared the BAZ experience with were fledgling local youth performers. During the past two years, the show’s team has partnered with Positively Arts Foundation to provide mentorship, collaboration and inspiration for students intent on pursuing a career in performance. 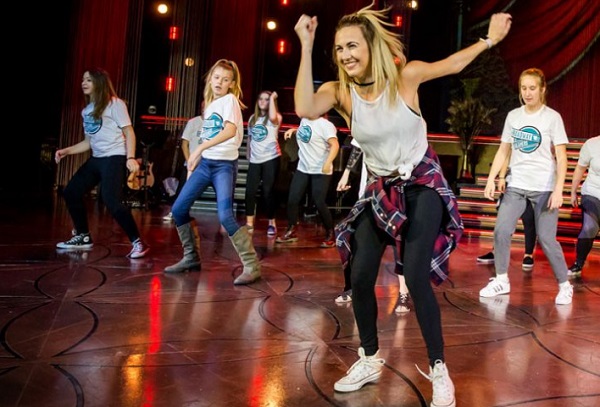 The cast of BAZ also put on the Positively Arts Holiday Spectacular at the Palazzo Theater last December. Featuring more than sixty Positively Arts students, the show brought performances of seasonal songs like “Silent Night,” “All I Want for Christmas Is You,” “This Christmas,” “Carol of the Bells” and “Let There Be Peace on Earth” to the stage with all proceeds benefiting the Foundation. For Savannah, teaching and performing on the same stage is something she will no doubt always relish:

I think its beyond amazing that I get to share something I love so dearly with others and help them find their own passion within the art.  Watching my students grow is the most inspiring and informative lesson for myself.

Now that BAZ: A Musical Mash-up has surpasseded the 500th-performance mark and is about to celebrate its two-year anniversary on the Strip, it’s clear that something special is going on inside the Palazzo Theater. With people like Savannah Cross to teach, inspire and entertain, here’s hoping that she and the cast of BAZ reach for the stars with five hundred more…and beyond. 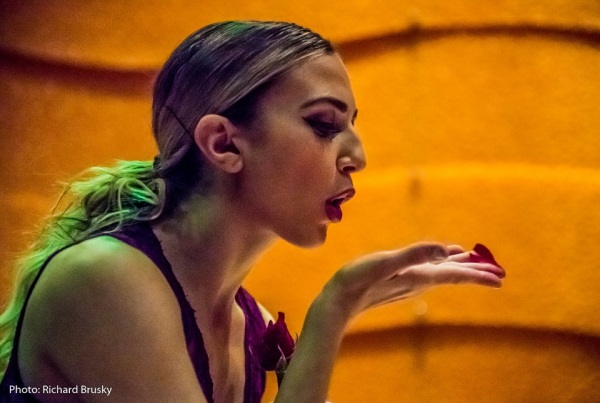 BAZ: A Musical Mash-up performs Tuesdays through Sundays at 8 pm. Tickets start at $64 (plus taxes/fees) and can be ordered here. VegasFool is currently offering discounted seats starting at $39(plus taxes/fees). Access that offer by clicking here.

One thought on “The Many Sides of Savannah Cross”