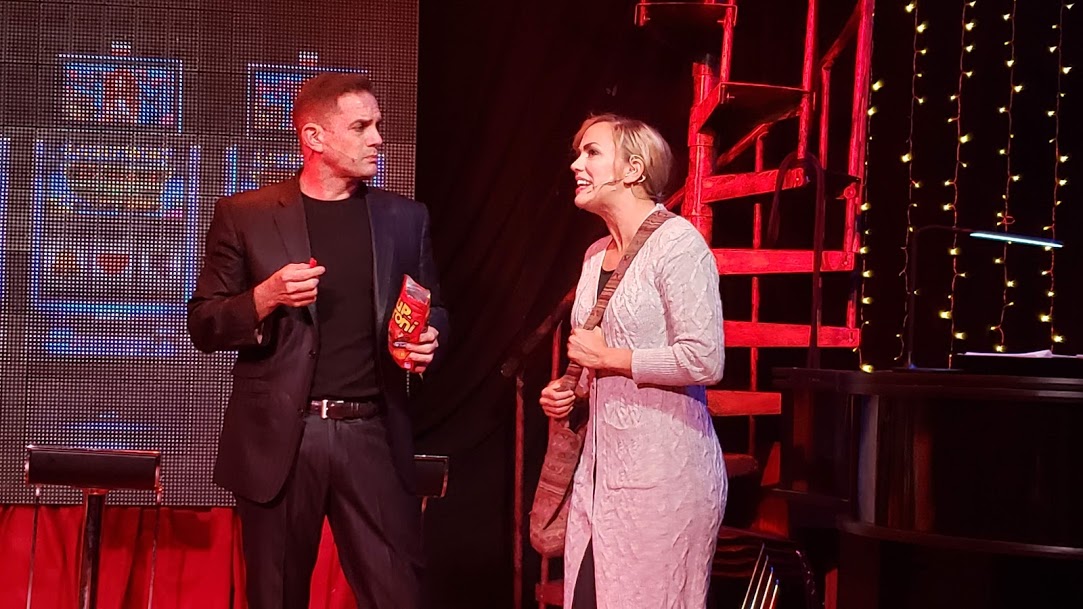 Despite my promises to do otherwise, it’s been way too long since this writer has visited a community theater performance. My last was the outstanding KRAMPUS by Majestic Repertory Theater during the 2018/2019 holiday season. It’s a good thing that dancer/choreographer Alejandro Domingo reached out to me this week and invited me to his latest production. Otherwise I might have missed the brilliantly entertaining SATANGO at downtown’s adorable Cockroach Theatre Company.

I’ll admit a certain weakness to the prospect of seeing Alejandro back in action after the abrupt closure of BAZ in 2018. Despite having kept busy since then, the abs-tastic dancer has been keeping a relatively low profile here in Sin City. Now it’s clear as to why…Domingo has created the choreography and supplies a supporting role in one of the cleverest and most wonderfully naughty new musicals in ages. 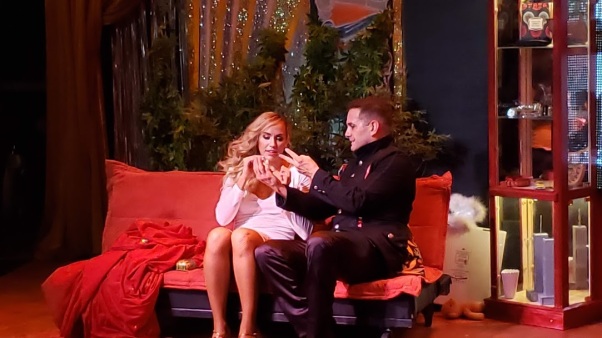 The premise of SATANGO is delightful and delicious. Toby Allen‘s “Old Scratch” is contemplating his eternity of loneliness (Welcome To My Neighborhood, I Was Once An Angel) while fearing that he may have lost his dance grooves. You see, it’s the eve of the All-Souls Ball, a once-in-a-millenium party. On that special night, the barrier between Heaven and Hell dissolves, giving souls the opportunity to lure each other to the opposite side. How? By using tango, the “Dance of Seduction”, of course. Will Lucifer’s dancing impress the other guests…and will he find an eternal companion?

Fortunately for Satan, a lost innocent named Sofia (played by Savannah Smith) happens to pass through the gates to his fiery lair. She also just happens to be a dance instructor from Pahrump! Using his persuasive charms (“Everyone loves Luci!”, he boasts), Satan manages to strike a deal with Sofia to give him three tango lessons. She asks for one thing in return, which she’ll reveal after the party. What ensues is an amusing and steamy tug of war between the temptations of naughtiness and the rewards of being pure. 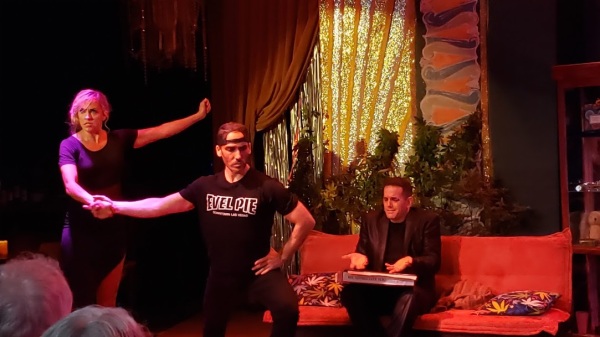 Pop-culture references and topical humor fly as fast as the nimble feet in a wild assortment of comical and sexy dance numbers. Vegas locals will enjoy a shout-out to downtown pizza favorite Evel Pie and jabs at parking fees, the High Roller observation wheel and the ill-fated Fontainebleau tower. Supported by a solid five-piece band led by Music Director Keith Thompson, the cast belts out fifteen original songs (music by Stewart D’ Arrietta, book and lyrics by Justin Fleming) that keep the plot moving at just the right pace. 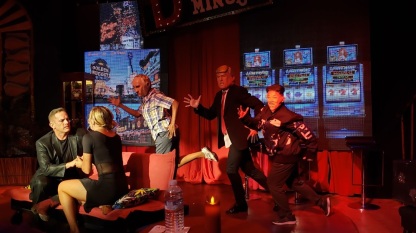 Toby Allen absolutely shines in the lead role. Despite his towering physical presence, Allen tends to be the lowest-profile member of Venetian’s long-running Human Nature Jukebox. In SATANGO, he unleashes a maelstrom of emotions and energy coupled with a scathing slice of wit. He’s clearly great at improv, too. An opening-weekend mishap with a prop was splendidly blended into the proceedings by Allen. As luck would have it, a second occurrence of the same gaffe occurred perfectly in sync with lyrics being sung at that moment. Clearly, the Devil had an angel on his shoulder last night.

Speaking of angels, Savannah Smith (Vegas! The Show) is sheer nirvana as “Sofia”. Whether singing the praises of Pahrump from atop a ladder (My Favorite Place To Eat) or bringing the audience to its feet with her dazzling steps, the popular singer/actress/dancer is clearly having the time of her life. 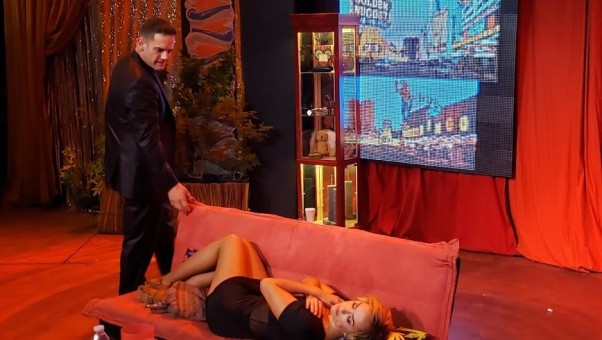 Alejandro Domingo, Kate Farrow and Socorro Jones round out the wonderful cast. They portray Satan’s minions along with a variety of other characters including Donald Trump, Kim Kardashian and even a lusty delivery boy. And yes, Domingo doffs his shirt once more to display the legendary abs that earned him a place on my list of the hottest guys in Vegas five years ago.

Despite the tiny size of Cockroach Theatre Company, every inch of the venue is utilized in this production. Set design and costumes are spot-on, and director Wayne Harrison (ABSINTHE) achieves a polish that belies the indie nature of this production.

SATANGO is one dance with the Devil that you won’t want to miss. You’ll forget your humble surroundings and be immediately drawn into this den of temptation. That’s the magic of live theater, and SATANGO pulls it off with aplomb.

Cockroach Theatre Company is located at 1025 South First Street #110 in the Arts District. SATANGO performs Friday through Sunday at 8pm through June 23rd with matinee performances at 2pm on Saturday and Sunday. Tickets are $35 ($20 for public servants) and can be ordered here.