The men of Chippendales have always been trendsetting in the world of the male revues. Innovative and daring, they’ve raised the bar and set new standards for celebrity guest hosts, too. From Tony Dovolani and Nyle Dimarco (of Dancing with the Stars) to supermodel/actor Tyson Beckford…if they’re hot, you know that they’ll eventually be strapping on the signature collar, cuffs, and bowtie. After all, who could resist the appeal of the gold-standard Chippendales brand?

Last year’s guest stint with Jersey Shore alumnus Vinny Guadagnino set new records at Rio for the long-running production. MTV‘s “Keto Guido” returned for a second round, proving that audiences were thirsty to see their favorite hunks up close and in the flesh. Now Chippendales has answered the call once more with special guests Joss Mooney and Rogan O’Connor.

Mooney and O’Connor have been individually sending shock waves through the airwaves via appearances on programs like MTV’s THE CHALLENGE: World of War 2, FINAL RECKONING and EX ON THE BEACH. It was only a matter of time before these two athletically-gifted men-about-town would come face to face in the real world. 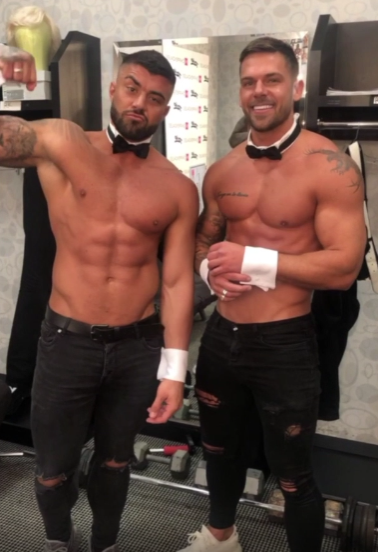 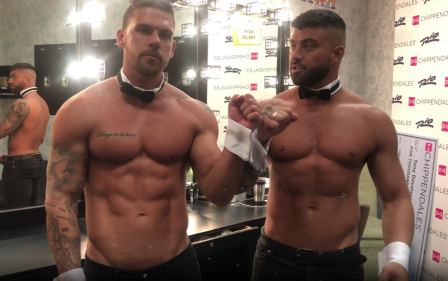 The boys don their cuffs and collars for the first time…

What could have been a disastrous, competitive head-butting has turned into the ultimate bromance. Now the pair are best pals and affectionately known as “Jogan”. Sexy, unstoppable and a true force of nature, the fit Brits will make their way onto the Chippendales stage for four shows only on January 24th and 25th.

“Guys like Joss and Rogan fit the bill as great looking, athletically fit celebrity talent who enhance the Chippendales experience when strategically integrated in the show.” says Kevin Denberg, Chippendales Managing Partner. “We’re excited to have them on board.”

Dance captain Ryan Kelsey takes the guys through their paces…

And you’ll be excited, too, when you see what Joss and Rogan have up their sleeves…and under their shirts. Could a resident gig be in their future? That remains to be seen, but with such a loyal fan base, they’re likely to sell out all four scheduled performances right away. So don’t take any chances. Order your seats today.

Chippendales tickets start at only $38 (plus taxes/fees) at Best Of Vegas.

I was one of many who were shocked when Chippendales announced notoriously-outspoken Perez Hilton as their next celebrity host. After all, the self-proclaimed “Queen Of All Media” was hardly forged from the same slabs of beef as previous guests like Tyson Beckford and Antonio Sabator Jr. So what gives?

The answer is that the forces behind Chippendales version 2018 are ready to shake things up. With the absurdly awful Magic Mike Live biting into their sales and cutting-edge newcomers like Aussie Heat offering alternative takes on the male revue concept, it isn’t enough to just be the gold standard any more. 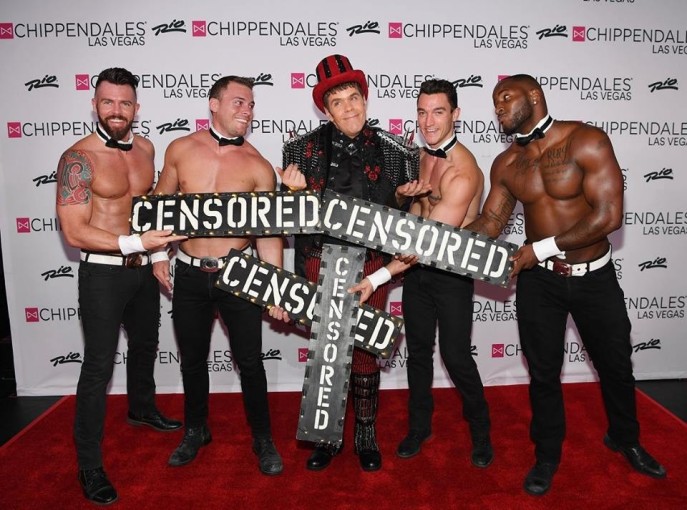 With the passage of marriage equality, the need for gay-only entertainment options has largely melted away. LGBTQ tourists are now welcomed along with everyone else, so it’s common to see gay couples and groups attending male revues along with the ladies.

That’s why Perez Hilton fits so nicely into this hosting gig. Never one to shy away from controversy, the flamboyant Hilton is this generation’s Paul Lynde, Liberace or Siegfried & Roy. He’s way out there, yet approachable. Daring, yet somehow safe. A perfect mash-up of comedy, shock value and tongue-in-cheek humor to make your night on the town an only-in-Vegas experience. 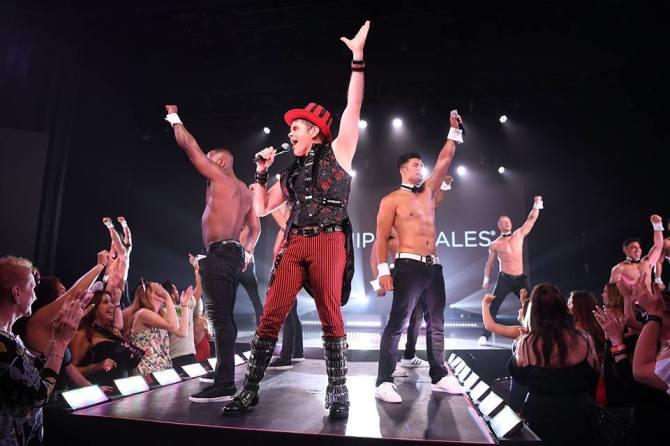 I sat down with Perez before the official opening of his debut last Friday. Decked out as a carnival barker in a spectacular Jeffrey DeBarathy-designed costume reminiscent of Britney Spears’ ensemble for The Circus tour, Hilton was surprisingly eloquent and soft-spoken.

When asked if he felt like a pioneer by being the first openly-gay host of a show that once prohibited men from attending, Perez seemed surprised:

Wait a minute….I’m gay? Who told you that? (laughter). Wow, I did not know that! So men weren’t allowed in the audience before…that’s interesting. But no, I can’t say that I feel anything like a pioneer. This is something that I’ve wanted to do for awhile and I’m glad we were able to make it happen!

“Now that you’ve been in rehearsals, gotten to meet all the guys and seen their inner workings (more laughter), were there any pre-conceived notions about Chippendales that were either confirmed or shattered?”

(sly grin) Hmmmm….there weren’t really any backstage shocks that I can think of. I know the show pretty well from coming so many times. And I’ve only been rehearsing since Monday so there hasn’t been a lot of opportunity to think about things like that when you’re focused on the work.

I will say that everyone here has been supportive of me and they’ve made it easy. It’s been so much fun and I’m eager to see how the audiences react. This is uncharted territory for me as much as them.

With the pre-show party about to begin inside the adjacent Flirt Lounge, time was running short. So I was able to ask one last question – “What advice can you offer a small-time blogger like myself?”.

You need to know your audiences for every individual platform. The readers on Facebook are going to be a different group from those on Instagram. They want to experience different kinds of content, so you need to tailor each social media outlet to their expectations, not yours.

YouTube is the big one right now. You have to use video…and lots of it. People want to see for themselves what you’re up to. I have two YouTube channels and it’s a challenge to keep up with all of it, but you have to stay current and pump out new information all the time.

After fans (and the curious) had lined up and taken their seats inside Rio‘s custom Chippendales Theater, the countdown to showtime was interrupted by Perez himself. Appearing from behind the audience, the host stopped the show with a bit of impish playfulness before allowing the beefcake to be revealed.

Throughout the evening, Hilton worked his way into the proceedings with his signature charm, playing emcee for a faux game show, busting in on performer Kyle Efthemes‘ “Purple Rain” shower sequence (yes, really) and holding an open forum for questions from the audience.

What could have been a train-wreck attempt at hipness from lesser media celebs (the flatliner response to Chester Lockhart and Scheana Shay’s short-lived stint at Sex Tips for Straight Women From a Gay Man comes to mind) turns out to be a brilliant move. And one that should bring in hordes of new fans to the long-running show. 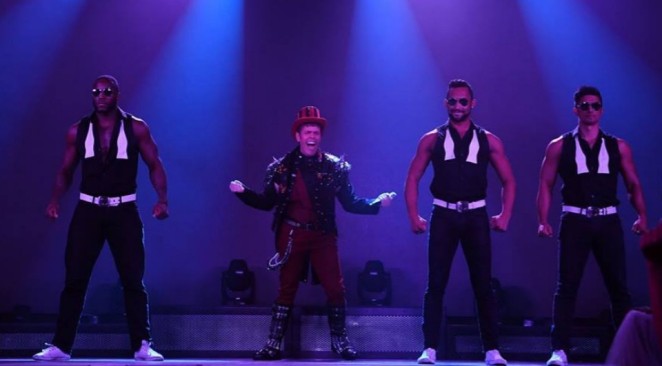 But don’t take my word for it. See the audacious Perez Hilton and his crowd-pleasing antics for yourself. Chippendales performs nightly at 8:30 p.m. with additional shows on Thursday, Friday and Saturday at 10:30 p.m.