Raising a child in any large city can be a challenge. You want to be a great role model, provide for your children yet still make their formative years memorable, fun and happy. Now imagine being a single father in “Sin City”…and you’re a performer working late nights in an adult-themed production. That’s the reality of ZUMANITY heartthrob Wayne Skivington.

Skivington was born in a British Military Hospital in Germany. He began formal gymnastics instruction at the age of four and his natural talents were quickly recognized. When his family returned to Great Britain in 1994, Wayne performed in many exhibitions. While representing the nation at an international competition in Palm Springs, his troupe stopped in Las Vegas, visited Treasure Island’s Mystere….and Wayne’s love affair with Cirque du Soleil began.

Mesmerized by the renowned Alexis Brothers’ balancing act, Wayne sent his show reel to Cirque du Soleil along with an employment application. In 2008, as he was about to turn twenty-one, the handsome athlete was invited to join the Montreal-based entertainment company. 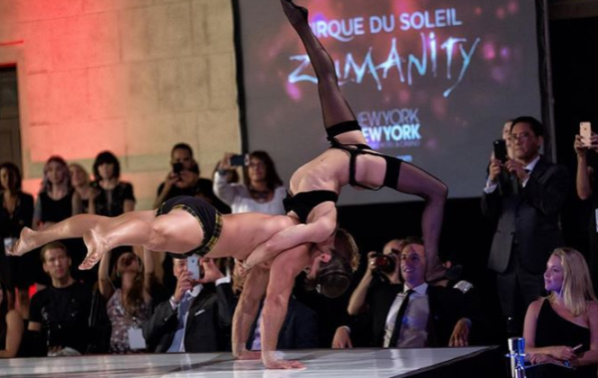 To his surprise, Wayne was hired for their Las Vegas division and placed him in Mystere, the very show that had inspired him to apply. Accepting the position required leaving his sports coaching/conditioning studies at University of Leeds, but it’s a decision that Wayne has never regretted.

After his stint at MYSTERE, Skivington became the coach for Criss Angel BeLIEve and joined the cast onstage as a fellow performer. Now thirty-one, he’s a fitness coach at Rebound Vigour during the day and ZUMANITY’s sexy Scotsman at night. His sensual acrobatic routine raises temperatures ten times each week at New York NY Hotel Casino.

Fatherhood has taken Skivington’s personal life to greater heights than a trapeze. Six-year-old son Rowan shares Wayne’s blonde hair and gift for gymnastics and acrobatics. The two have become a worldwide sensation thanks to a series of father/son workout videos that Wayne shared on social media platforms. 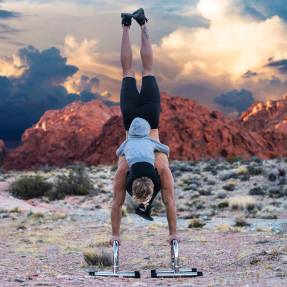 Being a single parent with two jobs, I don’t have a great deal of spare time. So, my son is always with me. It was by sheer fluke that one day whilst videoing, like most parents do, I realized my son was copying me working out. He loves attempting to do what daddy does!

Wayne stresses that his time with Rowan isn’t what he considers to be a formal exercise regime. He saves that for personal training sessions, garage and gym workouts…and of course, rehearsals at the theater with show partner Katerina. When Rowan and his dad do their amazing feats, it’s just father-and-son fun.

I think my videos have become popular because I am including my son in my active lifestyle, demonstrating the possibilities that lie with the greatest tool we own… our bodies! They can also see the trust my son has in me and the confidence I am building in him, all achieved through bonding during our playtime.

There’s no question that raising a little one in a city-wide adult playground poses its own challenges. Wayne has the unique added complexity of being in a production meant for mature eyes only. But this son of a military officer grew up quickly on a worldwide stage. He’s gained a lifetime of practical experience that most parents would never have exposure to.

Now Wayne is sharing his knowledge and perspectives by bringing fitness to families. He’s created a program called IP FIT FUN, which combines time-management principals with exercises that utilize your most valuable equipment – your own body. 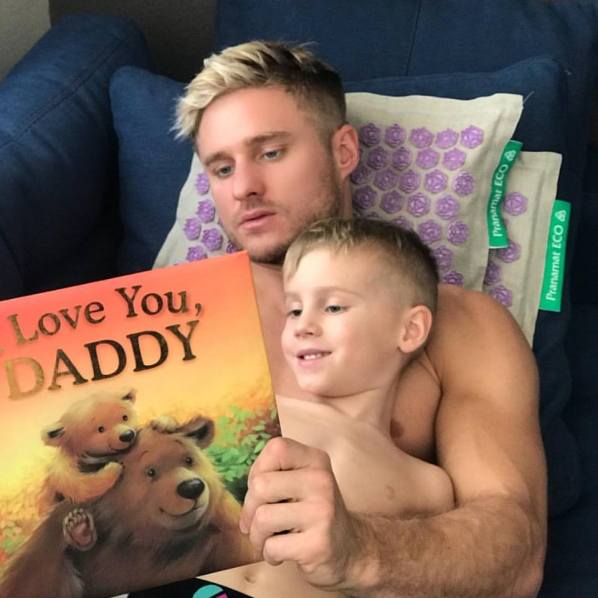 IP FIT FUN helps parents teach basic fundamentals of movement (to their children) through interaction and bonding. (They learn) to work out at home using body-weight exercises. Kids just soak up everything they see and realize anything is possible with a little dedication.

I want to encourage people to be a good role model, live a healthier lifestyle whilst having fun with the family, enriching relationships and memories that will last a lifetime.

As for the possibility of a father-son acrobatics act? Only time will tell if Rowan follows his dad’s footsteps into acrobatics and performance. But for now, he’s off to an amazing start. And his father will be there every step of the way.

“You are my motivation, my inspiration and my drive! I do it all for you”…