Superstar headliner residencies are the biggest draw on the Strip right now. We’ve got Mariah, Janet, Gwen and more with Christina on the way (Pink and Katy Perry are rumored to be eyeing gigs as well). Can you imagine how awesome it would be if Madonna, Lady Gaga and Britney Spears somehow teamed up for the megawatt show of a lifetime? Now you can stop dreaming, because Blond Invasion is here.

Blond Invasion is the latest show to open at V Theater inside Planet Hollywood’s Miracle Mile Shops. A stunningly clever yet simple concept, Blond Invasion is a beautifully executed salute to the ladies who keep us dancing. Unlike other tribute shows you may have seen, Blond Invasion doesn’t have lip-syncing or a rotating roster of celebrity acts. It’s a live performance created especially for fans of Madonna/Britney/Gaga by people who adore them.

In the crazy world of entertainment, you never know if or when you’ll ever get the chance (or finances) to see your favorite headliner. Britney lovers were blind-sided last November when her upcoming Park MGM residency was abruptly cancelled. Things turned even more dire just this month when the troubled pop tart’s manager stated that she may never perform again.

Britney’s devoted fan base will be thrilled when performer Katie Murdock blasts through the Planet Hollywood ceiling with uncanny live vocals and spot-on Britney moves. Flanked by an explosive male dance troupe, Katie opens with the fabulous “Circus”, followed by sensational interpretations of “Toxic”, “Womanizer” and of course, “Work B*tch”.

At the grand opening celebration, guests literally gasped when Ms. Murdock strolled into the party…the likeness was absolutely breathtaking. I later learned that Katie has already wowed thousands through her portrayal of Spears in the record-setting Legends In Concert. With fourteen years of Britney experience and a lifetime of singing and performing, Murdock’s act alone is worth the price of admission. But she’s just one of three powerhouse performances that make Blond Invasion such a treat.

The 90-minute production opens with Coty Alexander striking a pose to Madonna’s “Vogue”, followed by “Into The Groove”, “Papa Don’t Preach”, “Human Nature” and more. A multi-faceted artist who’s also a Legends in Concert alumnus, Alexander has thrilled with her interpretations of Gwen Stefani and Lady Gaga, too.

Speaking of Gaga, prepare to be floored when Philadelphia native Christina Shaw and the boys let loose with “Bad Romance”. Clad in a blue wig and glittery spandex, Christina shows off her own real keyboard skills at a lush red piano for a ballad-style rendition of “Poker Face”.  She and the boys celebrate diversity with “Born This Way”, bring the party directly to your seat for “Just Dance” and wrap up with a fabulous round of “Applause”. 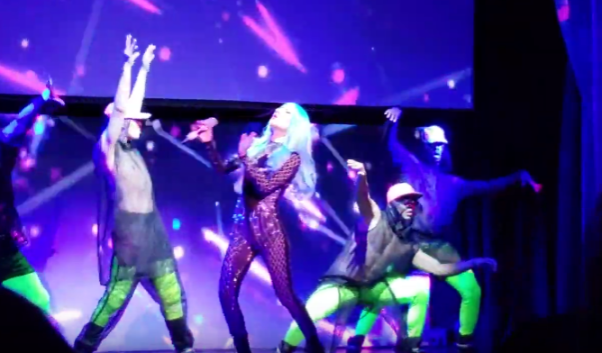 Along with their individual sets, Blond Invasion‘s three stars come together for something you’ll never see anywhere else…Madonna, Britney and Lady Gaga on one stage. Together they unleash a career-spanning medley that’s a concert event like no other.