The folks at Spiegelworld are on a roll. With the 8th anniversary of ABSINTHE fresh in our minds and OPIUM continuing to draw new fans, it was only a matter of time before the cutting-edge entertainment company would unleash another outlandish concept. Welcome, ladies and gentlemen, to the Atomic Saloon Show. 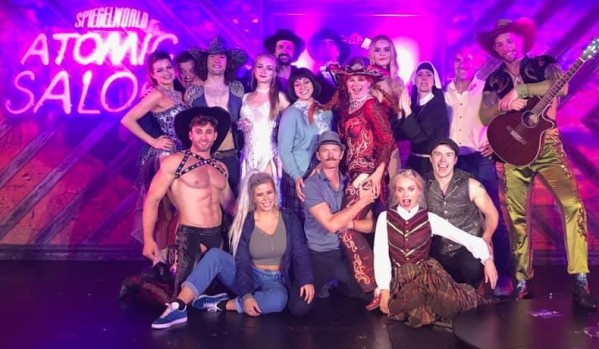 The latest offering from Ross Mollison and his creative team is an all-out effort. Taking over the gorgeous, little-known space once home to controversial ‘The Act’, Atomic Saloon is a fully-realized theatrical concept. The gorgeous multi-level club has been reborn as an immersive old-West saloon/hotel housing multiple bars, intimate private spaces, lush woodwork, period accents…and supposedly a top-floor brothel (more on that in a bit).

The backstory of ‘Atomic’ is as wacky as it is convoluted. The saloon’s original location in the Nevada desert was lost to nuclear testing decades ago. Proprietor “Boozy Skunkton” (Petra Massey) relocated her bar staff, working girls, entertainers and customers to a new spot inside Venetian’s Grand Canal Shoppes.

Apparently all of the citizens of Skunton’s former town decided to come along too, including “Reverend Peabody” (Damien Warren-Smith), his nuns, lots of cows and a few tumbleweeds. And it would seem that everyone is caught in some kind of time warp.

As luck would have it, each of the townsfolk has an amazing and sexually-charged talent…even the Mayor (Pavel Stankevich). His Honor is a wordless heart throb who wanders in and out of the show when not climbing onto a four-post apparatus to display his amazing flexibility and strength. Guitar-strumming “Blue Jackson” (Sex Tips‘ Colin Cahill) has a penchant for breaking into naughty songs between cattle stampedes, showing off a pair of swiveling hips that would make Elvis jealous.

Good girl “Sweet Cheeks” (Alina Shpynova) longs to be free of Boozy’s gentlemen-callers and run away with the saloon’s French stud “Jean-Louis” (Jérôme Simard). Their amusing attempts to escape Madam Skunton’s brothel form the wraparound plot. In between, guests are entertained by a collection of aerial, acrobatic and dance numbers that are so in-your-face that the front row is cautioned to remain seated. 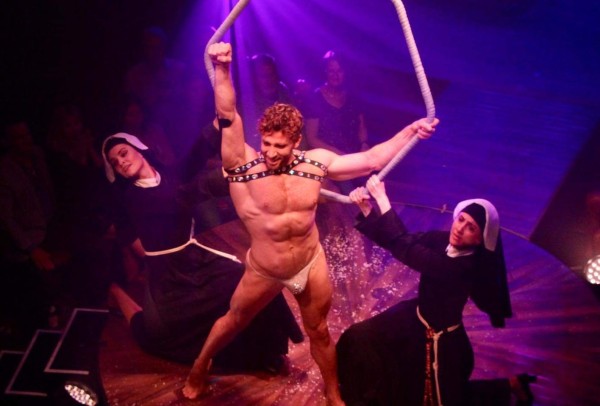 Efforts by the good Reverend to shut down Boozy’s establishment go predictably awry. So much so that the Sisters fall victim to their urges, unleashing a cavalcade of ping-pong balls into the audience (don’t ask). Rev. Peabody himself weakens under Boozy’s spell, leading to a tawdry dance that had this writer watching from between his fingers.

No Western tale would be complete without a bar brawl…and ‘Atomic Saloon Show’ unleashes a doozy.