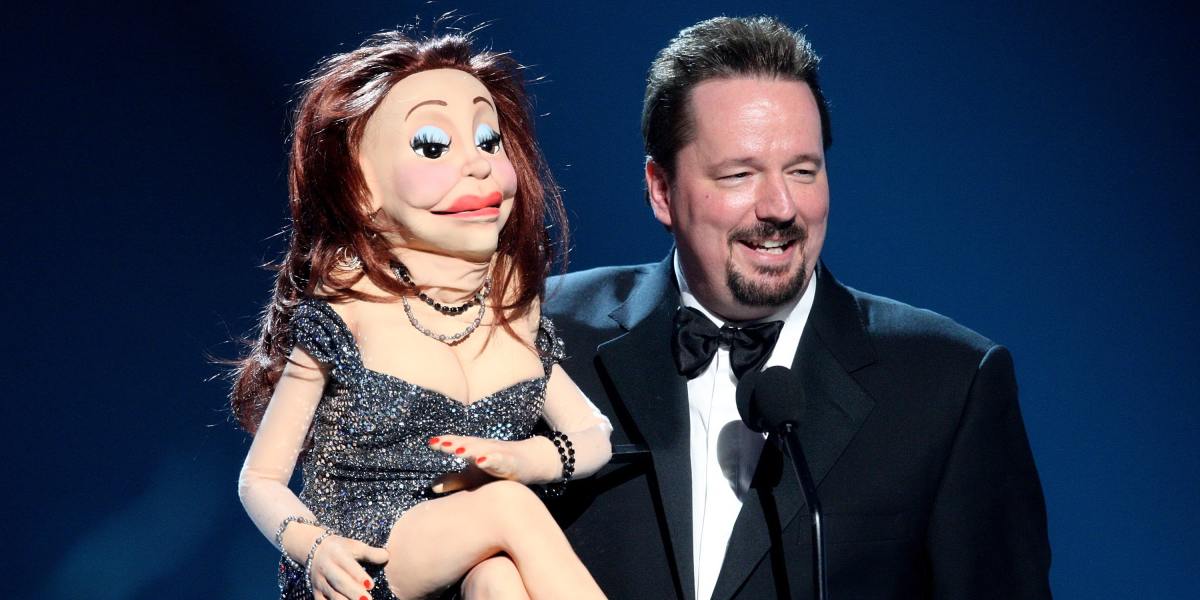 People often say that you shouldn’t kick a man when he’s down. But it’s hard to resist when the person in question is ventriloquist Terry Fator. Once the jewel in The Mirage’s entertainment crown, this walking tabloid magnet tumbled so hard and so fast that he was asked to leave the property.

Even his Tery Fator store was replaced with a shop that sold Kim Kardashian’s nasty-ass underwear. Refusing to admit defeat and fade off into memory, the controversial mouthpiece “Man of a Thousand Voices” vowed to return and rise again. Sound like anyone you know?

Fator managed to secure a holiday gig last year inside the former Zumanity Theater of New York NY. The news didn’t sit well with Christoper Kenny, creator of “Edie“, Zumanity’s host for more than a decade. You see, through his residency Fator has garnered a well-documented reputation of being a homophobe and bigot.

Remember last summer when we were all going batshit crazy with cabin fever thanks to a certain virus? Well, the brilliant minds at Fresh Wata Creative decided to host events outside of their home base at 3905 W. Diablo Drive (near Allegiant Stadium). Topless revues, drag shows, comedy acts and more drew crowds of locals and visitors alike And just like that, Dreamland Drive-In was born. 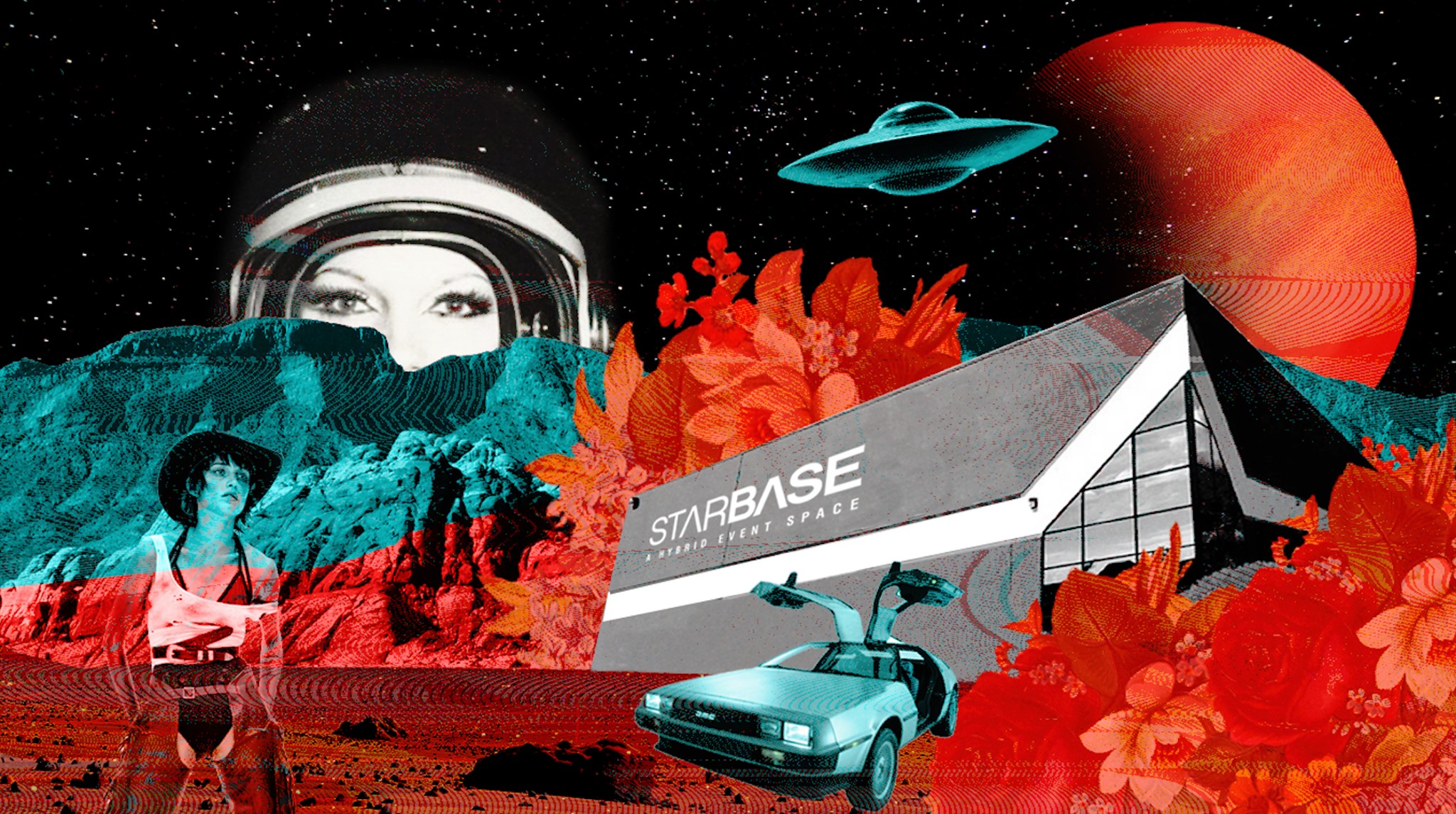 Fast forward twelve months, and now Fresh Wata‘s interior has been transformed into StarBase, a hybrid event center for in-person and virtual-reality functions. Born out of the entertainment needs of a deeply-changed society, StarBase is fully equipped with high tech, ten rooms of excitement and a team that’s ready to welcome revelers to our new reality.

StarBase’s creators believe hybrid events are the future for companies and brands post-pandemic and wanted to give event planners a turn-key solution by booking the event space. In hosting your conference or party at StarBase, you have the option to live stream content out to Facebook, Twitch or into the StarBase building.

There are many firsts at StarBase from the first NFT gallery in Las Vegas, to being the first fully operable hybrid event venue in the world featuring a digital twin in Microsoft’s Altspacevr called StarBaseXR. Attendees can meet at StarBase physically and virtually. StarBase XR is a world presented by a group of developers and professional producers at Fresh Wata, to replicate the venue as a 360 environment online.

StarBase XR can be visited in virtual reality from a headset, like an Oculus 2, or a Mac computer or PC. In other words, the venue is not limited to the physical location in Las Vegas and in general the team believes the sky is not the limit! Engagements will be held virtually inside StarBase XR for those unable to visit in person.

This weekend, Pride XR will lift off from the StarBase launching pad. PrideXR is the world’s first live/VR global LGBTQ Pride event: 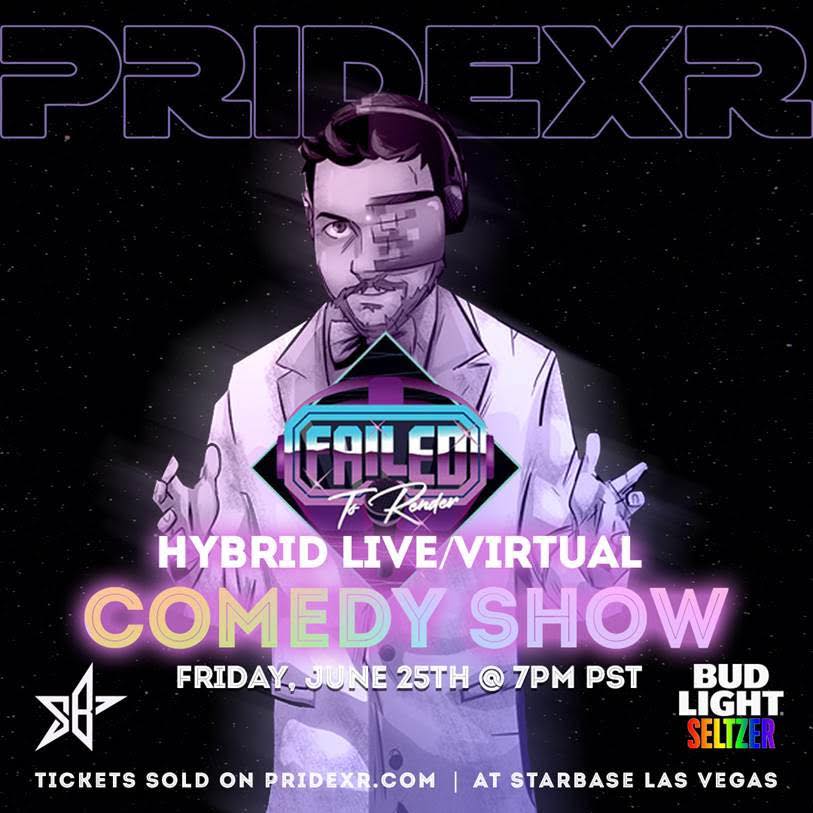 Stand-up comedians from Failed to Render, the first-ever hybrid comedy show, will take the stage in real life for the first time while simulcasting their show in VR. Following the show, DJ Celeste and DJ Skye will perform at the after party, along with live performances by Puerto Rican trap artist DAmire MAjor and more. Tickets are $35 and include a complimentary drink. Click here to order. Table and bottle service also available for the live show.

Tickets are $39.05 and include a complimentary drink. Vegas Unfiltered readers can get $20 off by using code “sam20“.  Click here to purchase tickets. Bottle service available first come first serve or book in advance via email at info@dreamlandxr.com. StarBase is located at 3905 W. Diablo Drive in Las Vegas, near Allegiant Stadium.

Update 3/12/21 – Since the original publication of this article in 2019, much has changed on the Vegas entertainment landscape. After a thorough search (and waiting for just the right time), the creators of ‘FAAABULOUS! The Show’ are launching this evening at their new resident location.

‘FAAABULOUS! The Show’ will perform every Friday night at 8pm inside the innovative and daring NOTORIETY LIVE in downtown Las Vegas. Price is $39.99 plus taxes/fees. To learn more about NOTORIETY LIVE, click this link for my article. To purchase tickets for ‘Faaabulous’, head right here.

NOTORIETY LIVE is located in downtown Las Vegas on the third level of NEONOPOLIS at the corner of N. 4th Street and 450 Fremont Street, above The 35 Cinema and The Nerd.

There are those who say that Britney Spears’ residency at Planet Hollywood was essentially a large-scale drag show. Outrageous costumes. Sexy back-up dancers. A heavily made-up performer who mimed her way through songs while sashaying around the stage, lip-syncing to the lyrics. Check-check-check.

Being a naysayer of Spears and her own wooden, detached performances, I’ve found it more entertaining to enjoy the talents of Britney impersonators. Becoming someone other than yourself….now that’s real talent. Vegas favorites like Derrick Barry (America’s Got Talent, DIVAS) and Katie Murdock (Blond Invasion, Legends In Concert) take that artistry even higher by physically embodying the star while having angelic singing voices of their own. 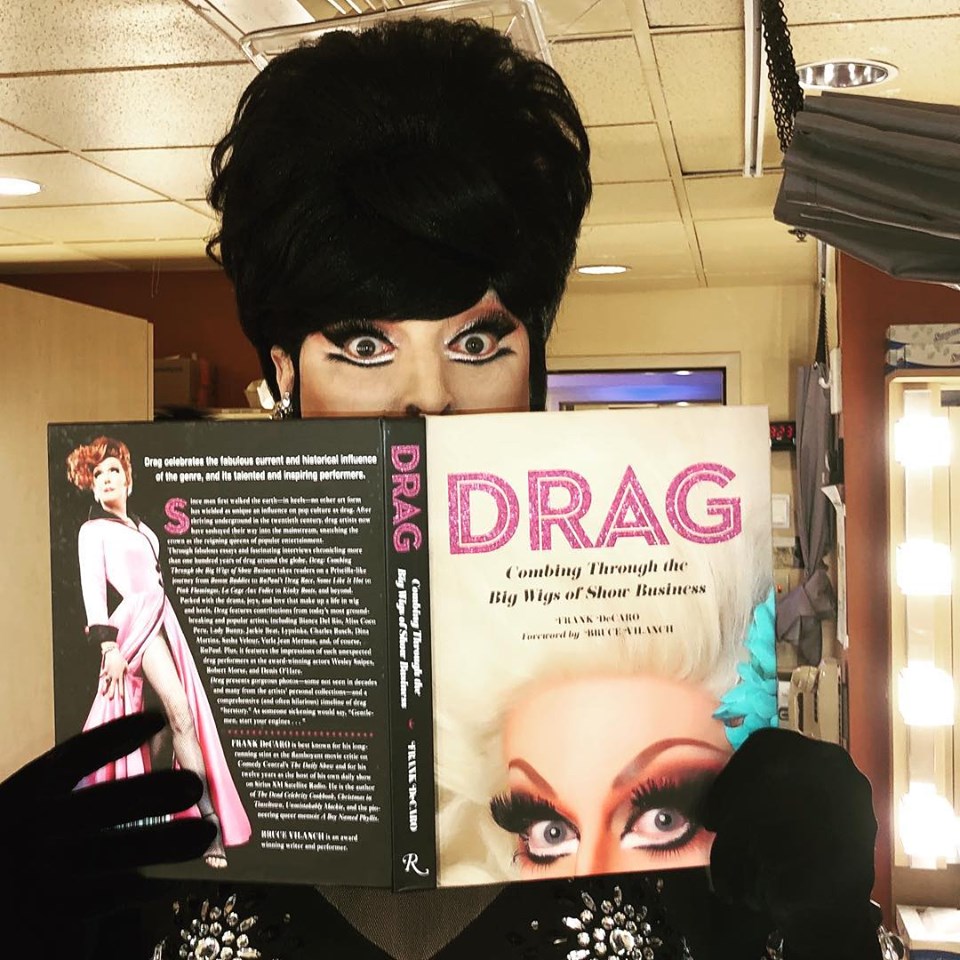 The art of drag is at an all-time high in our culture, especially here in Sin City. Senor Frog’s Drag Brunch at Treasure Island continues to pack in the crowd. Stars-N-Stilettos has arrived to take them on and Hamburger Mary’s has shifted its focus from beef to duct tape. Ester Goldberg gave it a go at SLS and Frank Marino’s DIVAS has been circling from above, rumored for a comeback at Hooters Casino (oh, the jokes we could make with that one).

The one common element for all of these productions is that drag artists rarely do any actual singing. Lip-syncing is the norm for this type of entertainment, hence the references to Britney. But that’s about to change with the debut of FAAABULOUS! The Show. This limited-run production will be the only singing/dancing/comedy drag show in Las Vegas…and they hope it finds a permanent home. 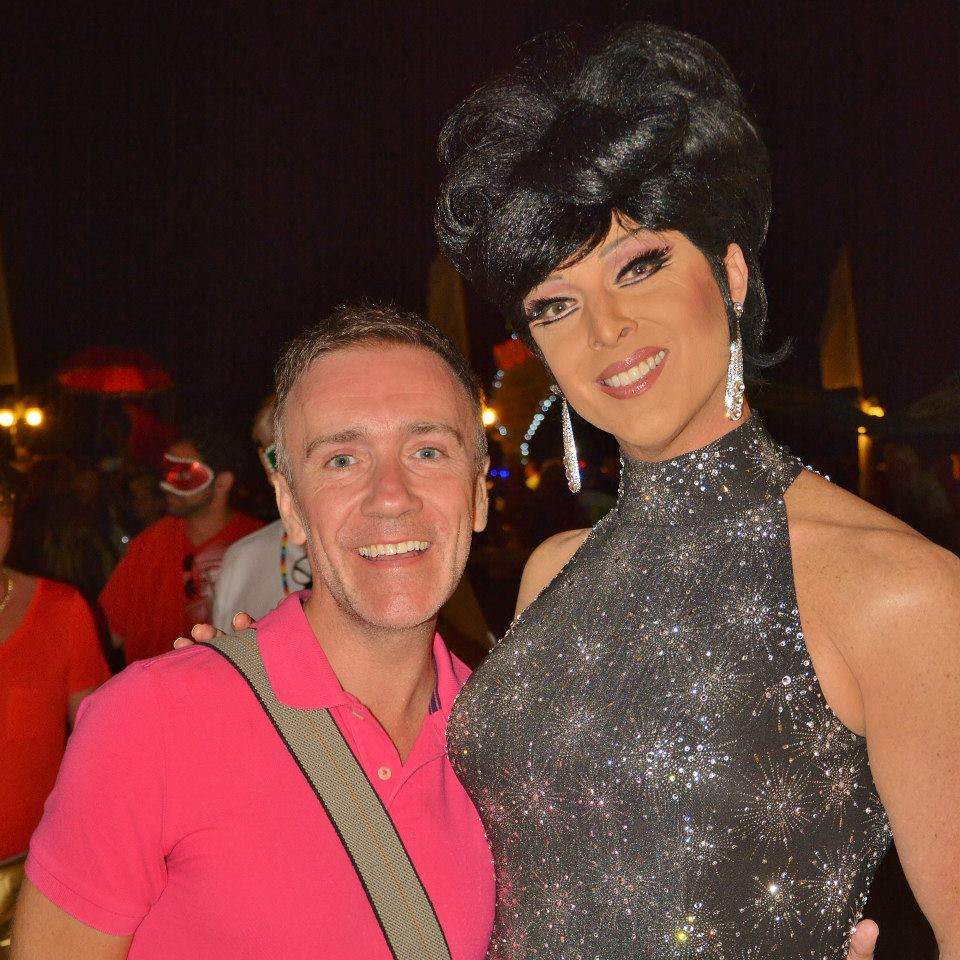 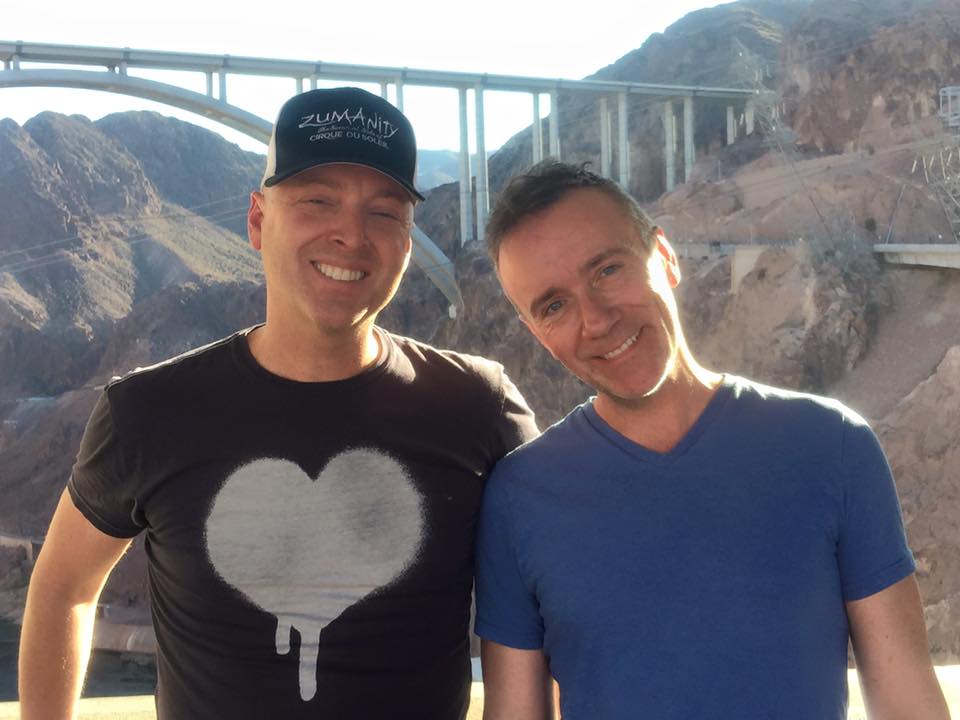 Together, this partnership of boundless talent has captured the essence of drag and infused it with the vocal and comedic skills of five artists, each possessing their own impressive accomplishments:

BELLA T. ROSS is the creation of Josh Ross, a Los Angeles native and a Debbie Allen Dance Academy graduate who has been performing professionally for 15 years. Some of his credits include The Disney Channel’s “Suite Life of Zack&Cody,” Donn Arden’s “Jubilee!,” Tokyo Disney’s “Mystic Rhythms,” “Chicago The Musical” aboard The Allure of the Sea, “Cats The Musical” at Tuacahn Center for the Arts, “The Grinch Live!” at Universal Studios Hollywood, and “A Las Vegas Christmas” at The Linq Las Vegas.
https://www.youtube.com/watch?v=wfjAWYxUrtg
DUSTY MUFFIN is the creation of C. Lash who is music supervisor/director and arranger for FAAABULOUS. He also created arrangements and direction for BAZ – Star Crossed Love (Palazzo), Scorsese: An American Crime Requiem (The Wallis), Tarantino (The Wallis) and Love Actually: Live (The Wallis). He was also the resident musical director and guest faculty member for UNLV’s Theatre Department.
JUNEBUG is the creation of Brooks Braselman, a Leo who enjoys thunder storms and keeping secrets. After majoring in musical theater at Boston’s Emerson College Brooks moved back to his home town of New Orleans. It was here he first squeezed his enormous head under a wig as Chicklet in “Psycho Beach Party” (Big Easy Award nomination). Since then Brooks has played a gaggle of lovely “ladies” including Christina Crawford in “Mommie Queerest (LA Weekly Award nomination), Natalie Green in “The Facts of Life: The Lost Episode,” Clarice startling in “The Silence Of The Clams,” Agnes Gooch in “Auntie Mame”, Velma Cruther in “Shut Up Sweet Charlotte!” He can currently be seen as Brock Hutchinson, along side John Malkovich, in the film “Supercon”, currently streaming on Amazon Prime!
https://www.youtube.com/watch?v=a7VW68YNZRo
SANDRA SANTIGOLD (“San San”) is the creation of Justin Rodriguez, a native of Queens, N.Y. who has called Las Vegas home for over 25 years. Credits include the National Tour of “RENT” (Angel), emcee/host of “Island Heat” at the Treasure Island Resort and Casino, multiple roles in “Tony ‘n Tina’s Wedding” at Bally’s Las Vegas; and even survived the short lived “Spoofical: The Musical” at Planet Hollywood Resort and Casino. He is currently the front man for  “Extreme Live”, a brand new immersive music experience at the Linq Las Vegas.
VITA SUMMERS is the creation of Ashton Shawver who played the role of Suzanne Sugarbaker in “Re-Designing Women” in Dallas (world premier), San Diego, Ft. Lauderdale and off-Broadway in New York. As Vita, Ashton has won several titles in the drag world including Texas All-American Goddess at Large and Miss Fire Island her first summer performing at the popular LGBTQ enclave. Vita also performed alongside Katy Perry on Saturday Night Live. A native of Texas who now lives and works in Ft Lauderdale, Vita is excited to be making her Las Vegas stage debut!

“No lip-synching. No impersonations. The cast of “Faaabulous! The Show” – Vita Summers, Bella Ross, Sandra Santigold, Dusty Muffin and JuneBug – are true triple threats. They sing, they dance, and they are damn funny! Kenney and Morris want to take drag to the next level and they believe this is the show that Las Vegas needs right now”.