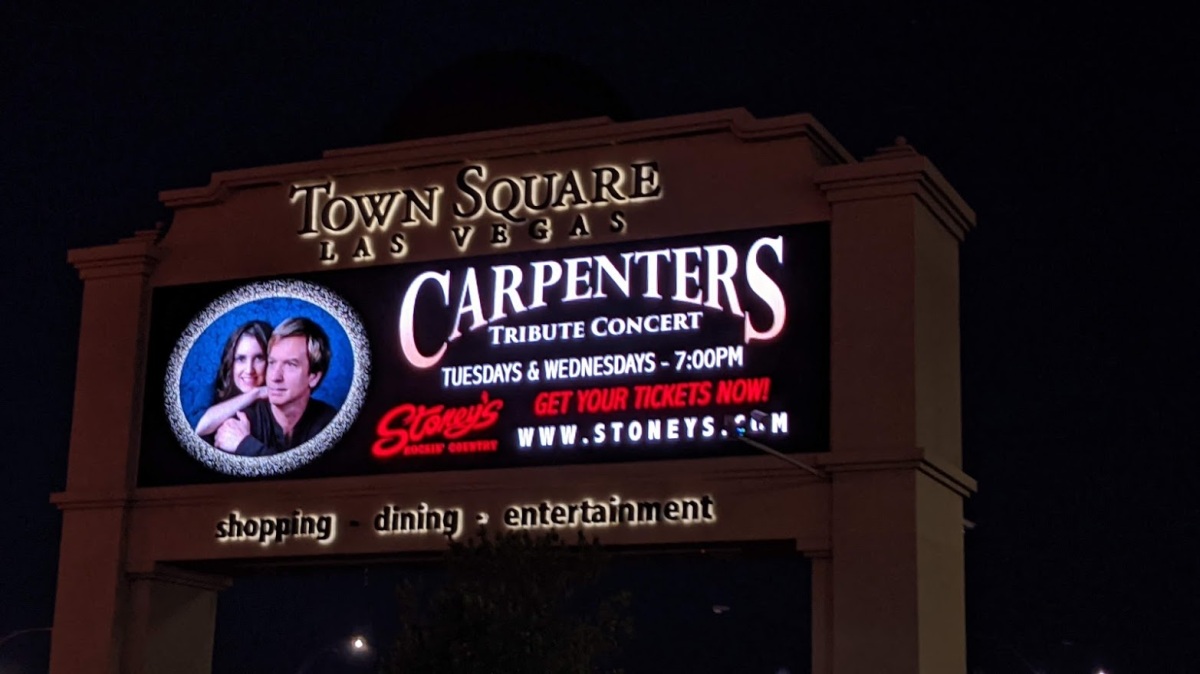 I have no shame in admitting my passion for music of the seventies. The legendary rock groups, family bands and solo artists will be remembered long after today’s contemporary noise has disappeared. And very few artists represent the heart of that era better than Karen and Richard Carpenter.

Much like the Osmonds, the Carpenters wrapped us in their warm embrace. Known for their gentle nature. loving rapport, Karen’s flawless voice, and Richard’s instrumental wizardry, the clean-cut siblings felt very much like family.

Karen’s untimely death in 1983 still hurts, but her songs remain a part of our lives, especially during the holiday season. With her life cut prematurely short, fans never got the privilege of an expanded songbook or a Strip residency (Donny and Marie played at Flamingo for a full decade). Thankfully, the timeless music of The Carpenters is coming to Las Vegas in a new residency at Town Square.

CARPENTERS TRIBUTE CONCERT will debut at Stoney’s Rockin’ Country on May 11th. Slated to perform every Tuesday and Wednesday at 7pm, the new residency is an authentic recreation of the duo’s 1976 U.K. tour. Starring Sally Olson as “Karen” and Ned Mills as “Richard”, the comedy-spiced production promises spot-on performances of all the hits you know and love.

Vegas fans have enjoyed CARPENTERS TRIBUTE CONCERT for a number of years. The show has performed throughout the city, most recently at Chianti’s Restaurant and the ever-popular Italian American Club on East Sahara Avenue. During the pandemic, the production offered live streaming performances to keep fans entertained during quarantine.

Sally Olson is the only artist to have performed as Karen Carpenter for the long-running LEGENDS IN CONCERT. The Rutland, Vermont native studied at Pennsylvania Academy of the Fine Arts and is an avid painter. In addition to being the central performer, Ms. Olson serves as Artistic Director for CARPENTERS TRIBUTE CONCERT.

Pianist Ned Mills studied jazz composition and arranging at North Texas University. He’s served as musical director for a number of entertainment heavyweights like Joan Rivers, the Ink Spots, and The Shirelles. Mr. Mills is also the founder and president of SONORE, a music-based company here in Las Vegas.

The announcement of Olson and Mills’ upcoming residency took place on May 5th at a benefit for The Composer’s Showcase Entertainment Relief Fund. The event was held at Stoney’s Rockin’ Country, the location for their six-week st. CARPENTERS TRIBUTE CONCERT joins the sexy new Apero (which I covered here) in an ever-growing list of live entertainment to be featured at Town Square.

Direct from Las Vegas – Carpenters Tribute Concert: A Re-creation of the 1976 UK Tour is the definitive show celebrating the music and legacy of the famed brother-sister duo. Starring Sally Olson as Karen Carpenter and Ned Mills as Richard Carpenter, the show is a re-creation of the 1976 UK tour, featuring hits including “We’ve Only Just Begun”, “Yesterday Once More”, “Superstar”, Karen’s drum solo, Richard’s classical piano feature, a Spike Jones parody of “Close To You”, comedy antics and much more.

This amazing production show is unique due to its high degree of authenticity. Carpenters Tribute Concert has captivated audiences across the country with faithful and spot-on recreations of the Carpenters’ music and has played to performing arts centers, cabaret spaces including the famed Triad Theater in NYC, and SOLD OUT showrooms in Las Vegas. The show was featured at the Carpenters 50th Anniversary Celebration in Thousand Oaks, CA in April 2019. Sally is the first-ever and only Karen Carpenter tribute artist to perform with Legends in Concert.

Carpenters Tribute Concert: A Re-creation of the 1976 UK Tour features a powerful live band, historical commentary, lovely arrangements and video, taking audiences on an incredible journey down memory lane into the world of the Carpenters – the world’s ONLY authentic Carpenters tribute production in sight and sound.

Tickets for CARPENTERS TRIBUTE CONCERT start at only $15 (plus taxes/fees) and are available here.  Stoney’s Rocking Country is located at 6611 S Las Vegas Blvd # 160 at Town Square. 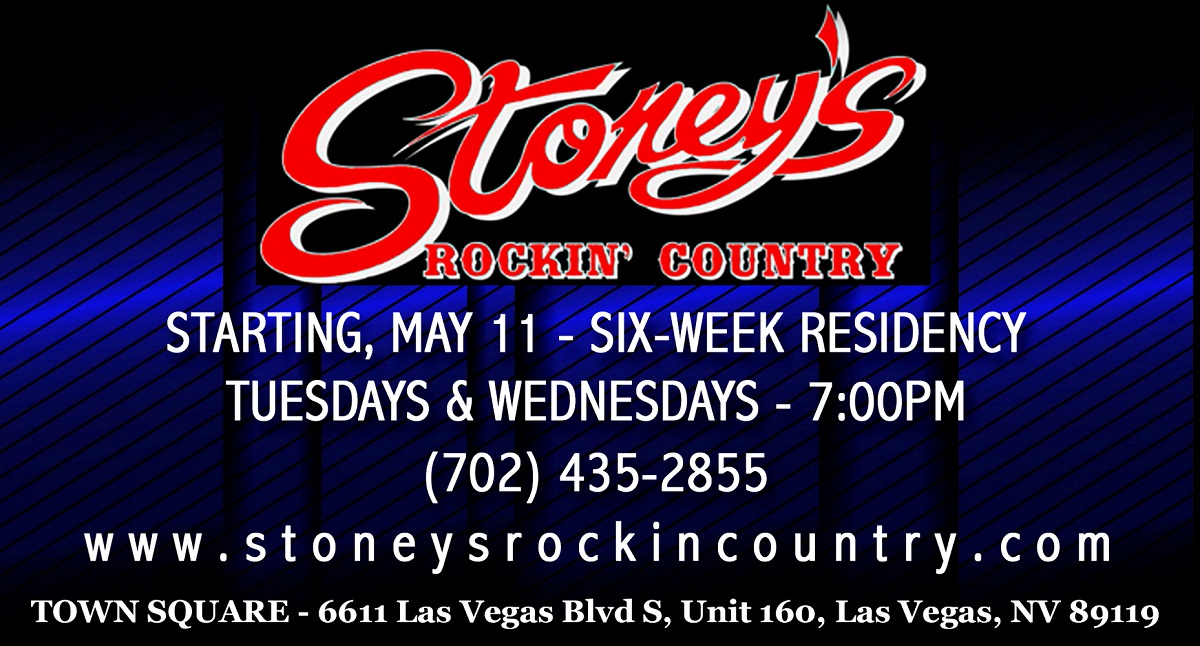 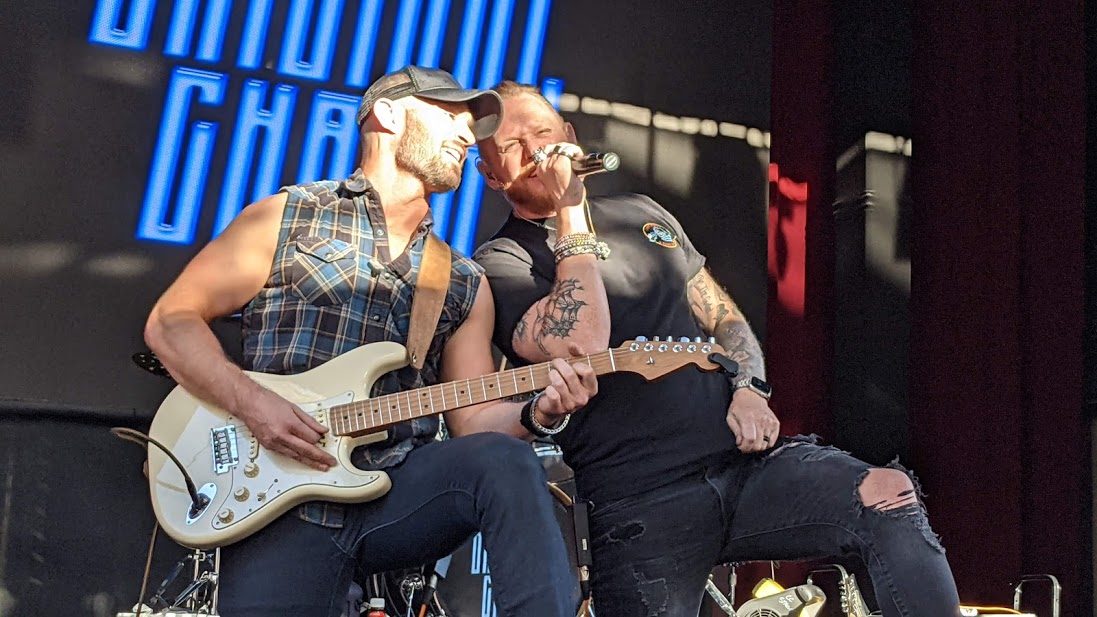 Intimate Venues are the Hottest Ticket to Sin City’s Rebirth…

The times, they are a changing’. Gone for now are the concert tours, superstar residencies and spectacular mega-productions. As Sin City eases into a new comfort zone, the smart money is on smaller spaces, where performers and audiences can connect on an intimate level. In other words, a pure entertainment experience. 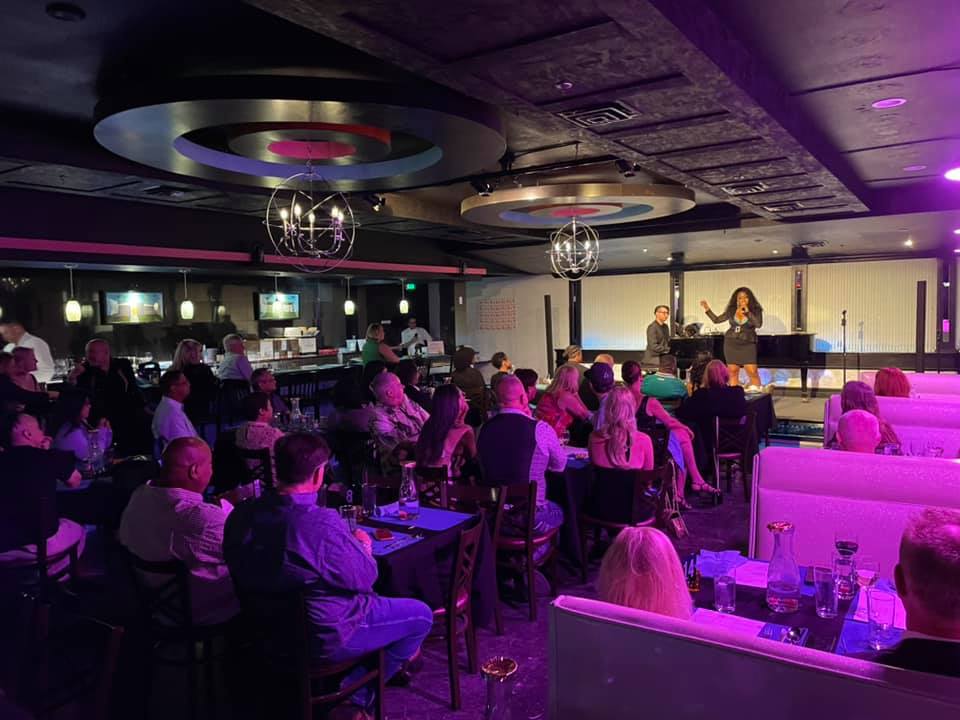 Lounge acts and supper clubs harken a return to the days that put Las Vegas on the map…a time when true talent was the star. Their resurgence is evidence that tourists and locals alike are yearning for live music, despite concerns of gathering in public spaces. Perhaps that’s why The Vegas Room, less than a year old, has already inspired a more elaborate sister club just down the block. Check out The Nevada Room, which debuted on May 13th.

NOTORIETY Live on Fremont Street is another small performance space experiencing a wave of popularity. Located in a former movie theater at Fremont Street’s NEONOPOLIS complex, NOTORIETY has attracted a number of notable names from a wide variety of Strip productions.

Spearheaded by Ken Henderson of Best Agency, the colorful NOTORIETY nightspot has been safely hosting magic shows, burlesque revues from Lucie May, rock concerts and comedy acts for months while others have remained shuttered. With its full bar service and available dining options, the 21-and-over clientele have been returning week after week for top-notch excitement. 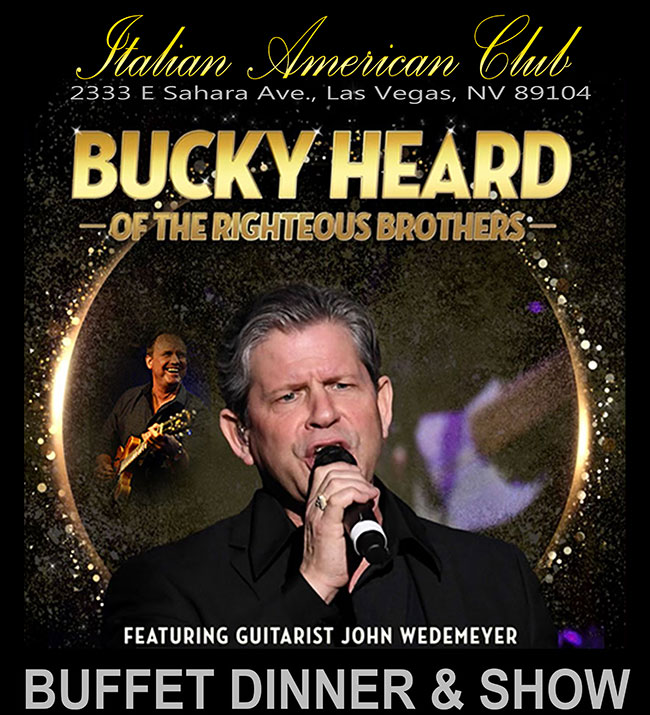 While contracted productions are on hiatus, individual performers have been able to create scaled-down solo shows. Bucky Heard of The Righteous Brothers (see my Las Vegas Magazine article here)  launched “The Heart of Rock & Roll”, a concert series. Bucky told me that it’s an intimate duo presentation with accomplished guitarist John Wedemeyer, who’s worked with legendary acts such as Donny and Marie, Bonnie Raitt, Wayne Newton and Clint Holmes.

Bucky and John’s “The Heart of Rock and Roll” premiered February 17th at Italian American Club on East Sahara Avenue. As usual, the guys put on a wonderful show that makes you long for more.

If you’ve never visited Italian American Club, you owe it to yourself to discover it. Thanks to a dear friend, I’ve experienced the joys of this old-school gem and their rotating roster of talent, both established and rising. Stunning hunks like Jonathan Karrant and Chadwick Johnson performed incredible pre-Christmas shows, and they’ll be back on the IAC stage very soon.  Other favorites include Craig Canter, Chase Brown, and Frankie Scinta. 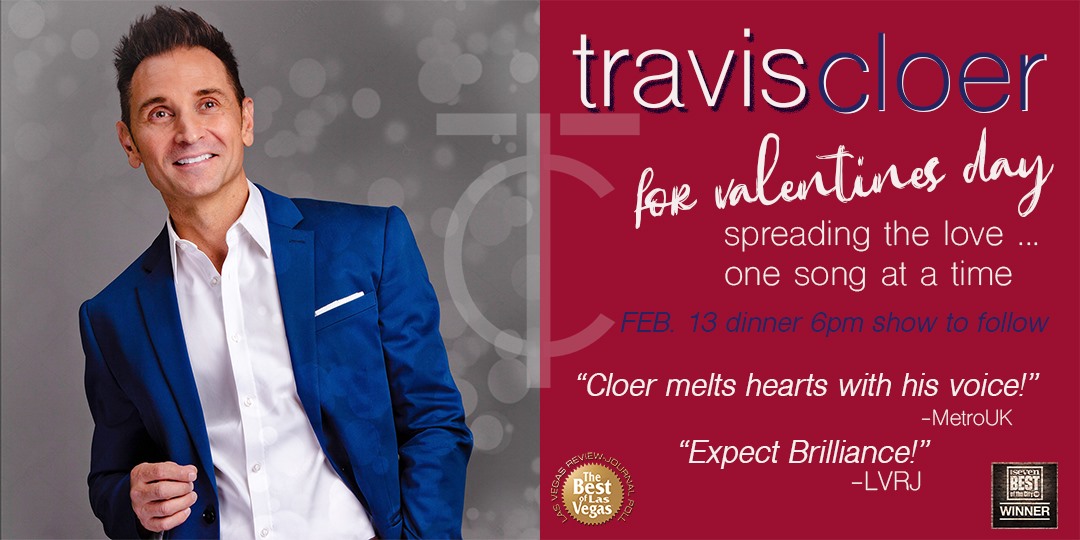 Travis Cloer, best known for his l0ng-running role in the Jersey Boys musical, was super-busy during the pandemic. He’s had gigs at The Vegas Room and Italian American Club, among others. In February he was at Chianti Restaurant with Christopher Lash for a special Valentine-themed performance. 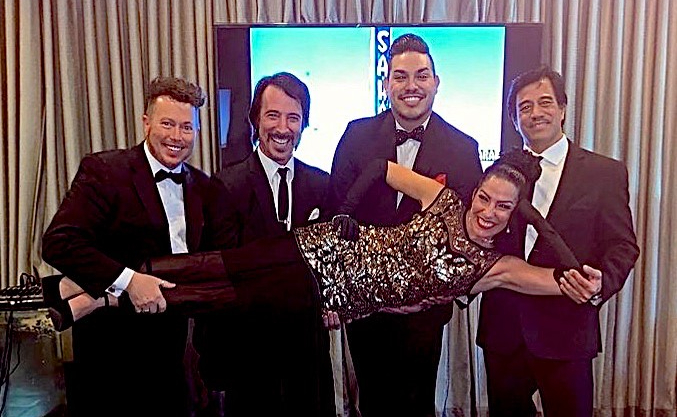 Crooners, Inc. at THE MINT Lounge…

February also saw the debut of Crooners, Inc. at The Mint Lounge on East Sahara Avenue. Described as “an hour and a half of pure, classic Vegas entertainment on Valentine’s Day with music, mayhem and memories”, the production features a full band and a cast that includes Miss Mala, Tony Felicetta, Jonny Bird, JC Lopez and Dean Perry.

Harrah’s outdoor lounge Carnival Court has been playing host to a number of familiar faces, albeit under aliases. The father/son duo of Vinny Adinolfi and son Vin A. (The Bronx Wanderers) hit the C.C. stage on the weekends, operating as…well, it seems to depend on the week. Let’s stick with “VINdemic” for now. The guys also hit Italian American Club with the full band in January, and was back there on February 18th.

Another effect of the pandemic has been the formation of “super groups”. What you get is a superlative combination of artists from various other productions working together under a new moniker. ORIGINAL CHAOS boasts TENORS OF ROCK members Dai Richards, Chris Cicchino and Tim Sorbs (The Black Donnellys), along with bare-chested hunk Andrew Diessner (replacing Colin Cahill, both from Atomic Saloon Show).

The new band has already gotten a stellar following, as evidenced by a sold-out performance of The Eagles‘ HOTEL CALIFORNIA at The Space earlier this month. Next ticketed event is a full-album presentation of PARANOID by Black Sabbath at The Space on June 20th. Get tickets here.

NOTORIETY Live hit the ground running in November with Vin and Jimmy’s DOWNTOWN HOOTENANY. An irreverent collection of music, comedy, and hysterical video segments, the show featured Jimmy Denning of TENORS OF ROCK, Vin A. (him again), Tim Sorbs on drums, and guest stars Bucky Heard and Colin Cahill (do you see a trend here?). A second edition of DOWNTOWN HOOTENANY took place in April. 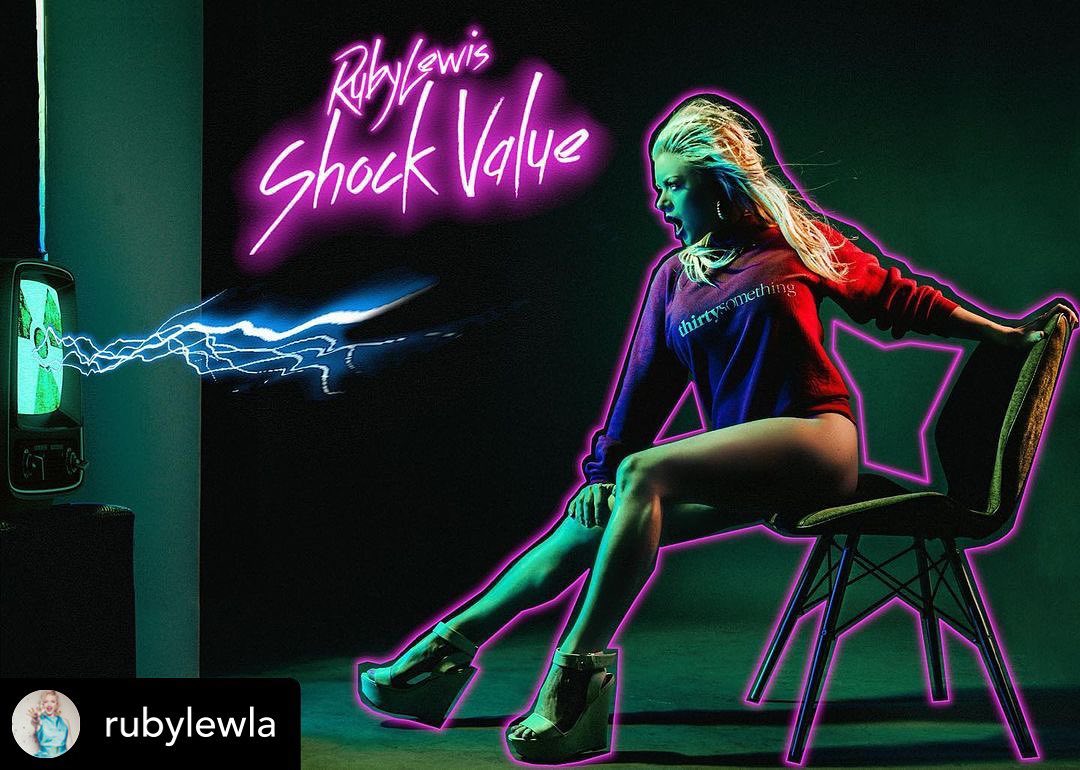 Broadway stage and screen star Ruby Lewis, a recurring guest at The Vegas Room, had her own showcase at NOTORIETY on February 25th. The one-night performance celebrated both her birthday and the release of her first original song “Shock Value“. Ms. Lewis was most recently at The Nevada Room with “Starlet“.

Mosaic Theater On The Strip just celebrated the 100th performance of Queens of Rock. AUSSIE HEAT male revue continues in its second year at the newly-remodeled venue, and MJ – The Evolution is due to open this month. 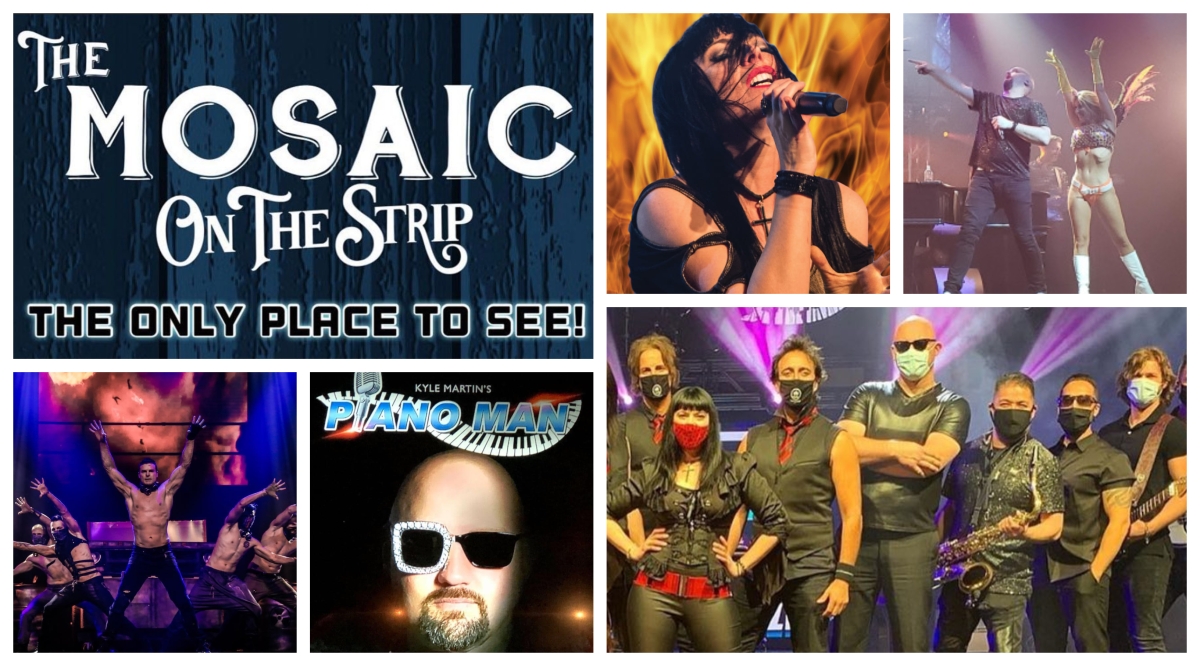 Even Town Square shopping complex has gotten into the entertainment scene. Stoney’s Rockin’ Country is currently hosting CARPENTERS TRIBUTE CONCERT, and Baobab Stage has APERO, a residency featuring alumni from Le Reve, Zumanity and many other top-tier productions.